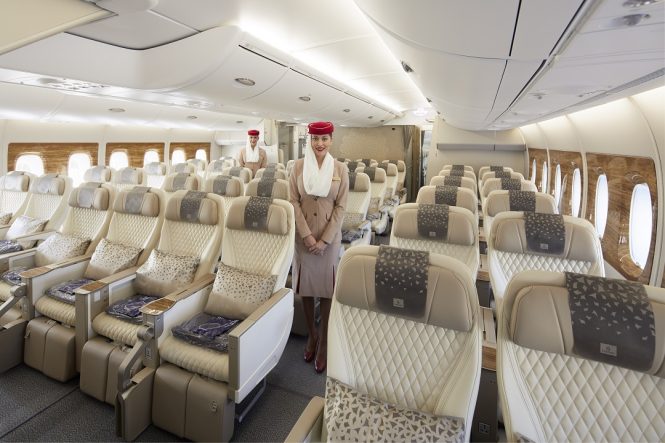 Emirates has recently announced plans to retrofit 105 of its modern wide-body aircraft with its premium economy product, on top of other cabin enhancements. Scheduled to begin at the end of 2022, the 18-month program will be conducted at the Emirates Engineering Centre in Dubai, and will see premium economy seats being added to no less than 52 Emirates A380s and 53 Boeing 777 aircraft. The airline is also considering installing a brand-new business-class product on its Boeing 777s, with customized seats arranged in a 1-2-1 layout.

Sir Tim Clark, the airline’s President, said in a statement, “Emirates is investing in this retrofit program to ensure that we continue to serve our customers’ needs, and provide the best experiences in the sky. Since we introduced our premium economy seats a year back, we’ve received a hugely positive response. Customers have been amazed by the quality and comfort. As Emirates has done with our signature first, business, and full-service economy travel experiences, we intend to further develop our premium economy into a distinctive Emirates experience that is unmatched in the industry.” As for the potential new business-class cabin, he added that “more details will be revealed in due course.”

When the retrofit program is finished, Emirates will have a total of 111 Boeing 777 and Airbus A380 aircraft offering premium economy seats, including the six four-cabin A380s that have already been delivered to the carrier. (Emirates’ A380s with premium economy will be operating on the airline’s flights to Frankfurt, London Heathrow, New York JFK, and Paris by the end of this year.)

On Emirates’ Boeing 777s, five rows of economy-class seats located just behind business class will be removed to install 24 premium economy seats laid out in 2-4-2 configuration. Meanwhile, 56 premium economy seats will be installed at the front of the main deck aboard the Emirates A380s, according to the same layout.