The Dubai-based carrier will be rolling out the new look across its fleet ahead of celebrations in December. 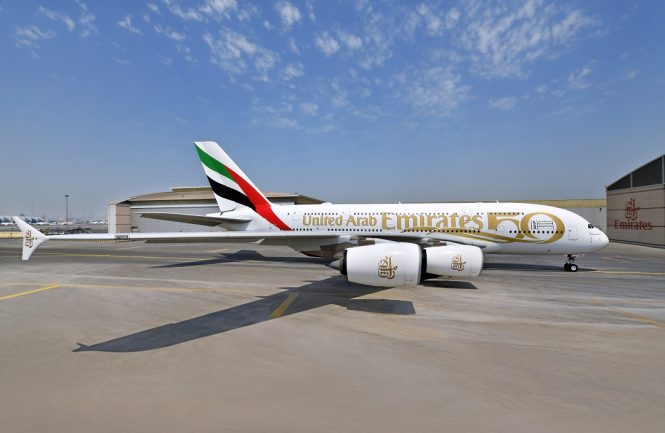 Emirates is marking the UAE’s 50th year of independence by unveiling special liveries on its Airbus A380s and Boeing 777-300ERs. The aircraft will be emblazoned with a bespoke “United Arab Emirates 50” design, using decals on both sides of the fuselage in Arabic and English.

The design utilizes “Emirates” in the original livery to complete the UAE’s name, denoting the airline’s pride at being a part of the nation’s journey and progress. According to Emirates, the silhouette of the “50” in the livery alludes to the layers of the country’s history, while the continuous swirls and curves express the accomplishments of the UAE in the last five decades. The official ‘Year of the Fiftieth’ logo also makes an appearance as it is encircled in the “0” of the “50.”

In a statement, Sheikh Ahmed bin Saeed Al Maktoum, Chairman and Chief Executive of Emirates Airline & Group, said, “The Golden Jubilee–themed aircraft are inspired by the vision, determination, and passion of the UAE’s founding fathers and the incredible 50-year journey since they started to shape a nation that has captured the world’s imagination — from its rapid progress to become one of the most connected countries in the world, to being one of just a few nations to launch a space mission.”

The first aircraft with the United Arab Emirates 50 anniversary livery, A6EVG, made its first debut flight to Frankfurt earlier this week. Over the course of the next month, more aircraft will be emblazoned with the special 50th livery. On average, it will take three days and up to 14 staff to install each decal at the Emirates Engineering Aircraft Appearance Center.

The fleet of aircraft adorned with the UAE 50th anniversary liveries are due to fly across the Emirates network, and will be visiting Los Angeles, London, New York, Zurich, and Paris, among other cities in the next few weeks, helping spread the UAE’s Golden Jubilee messages around the globe.