At the Jamu Bar on the adjoining outdoor terrace, which overlooks the boutique’s garden and sanggah temple one floor below, a mixologist prepares Balinese herbal elixirs like the sour-salty-sweet loloh cem cem. Design-minded travelers will no doubt be familiar with the jewelry brand John Hardy, which has been making waves ever since its eponymous Canadian founder established an artisan collective in 1975 to preserve Bali’s rich jewelry-making heritage. His successors have stayed true to his vision while expanding its global footprint with stores in Hong Kong and across the United States. Now, visitors to the Indonesian island where the company’s story began can drop in to the recently opened John Hardy Boutique & Gallery at Seminyak, located 20 kilometers from the brand’s main workshop outside Ubud.

Housed in an airy building that steps up from a front garden on bustling Jalan Petitenget, the showroom is no ordinary boutique. John Hardy jewelry collections such as Tiga, Spear, Dot, and Chain—and Bali-made artisanal goods ranging from Threads of Life textiles to Gaya ceramics—take pride of place below an oversize coconut-leaf sculpture by local weaving collective Make a Scene. Also featured here is Gamelatron Lingkaran Kenong, the world’s first robotic gamelan orchestra and the work of conceptual artist Aaron Taylor Kuffner. Until May, the gallery alongside is showcasing pieces by Made Griyawan, one of the foremost practitioners of the Batuan style of Balinese traditional painting.

At the Jamu Bar on the adjoining outdoor terrace, which overlooks the boutique’s garden and sanggah temple one floor below, a mixologist prepares Balinese herbal elixirs like the sour-salty-sweet loloh cem cem. Hungry patrons are free to pair them with sharing plates off an all-day menu. Downstairs, those who book a seat at least three hours in advance can partake in The Long Table Lunch—a 30-year-old tradition at John Hardy’s workshop—which offers a daily-changing, produce-driven set menu designed in partnership with Locavore, a pioneering Ubud restaurant. Dishes might include ayam tanah Gianyar, or clay-baked chicken infused with spices.

This tasteful combination of Balinese design, artwork, food, and drink—and the chance to join John Hardy’s jewelry-making classes—should give one plenty of reason to linger. 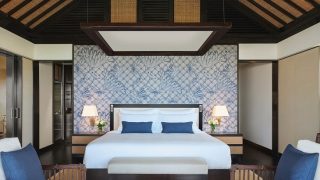 One of Bali’s most avant-garde restaurants wants to spread a positive message through its latest o... 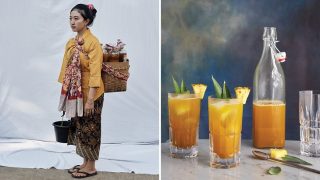 Celebrating the Art of Jamu