A refreshed kids’ menu plus Warner Bros. World Abu Dhabi–themed amenities and activity packs will be offered on longer flights. 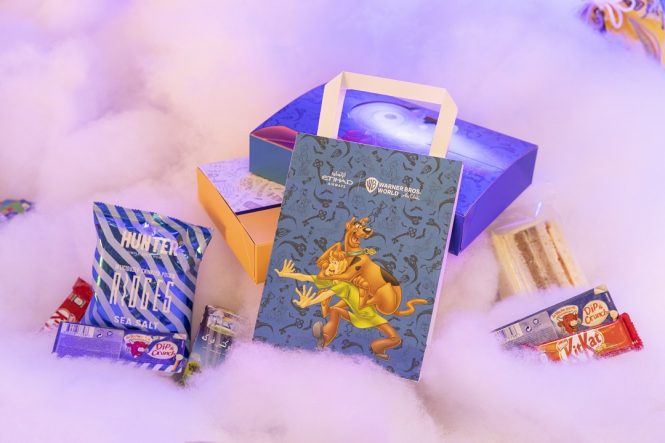 Families flying Etihad Airways in the coming months can look forward to special touches thanks to the brand-new Little VIP campaign, which aims to “make traveling with children as easy and enjoyable as possible.” This collaboration with theme park Warner Bros. World Abu Dhabi promises an improved experience for children on board the airline’s fleet. Kids traveling on longer flights with Etihad will receive new activity packs featuring popular animated characters like Scooby-Doo and Looney Tunes’ Sylvester and Tweety.

The airline’s new children’s gifts come designed in three age ranges. For infants up to two years old, parents will be given a soft fleece blanket decorated with the faces of Tweety, Bugs Bunny, Daffy Duck and Sylvester for them to take home. Young flyers aged three to eight years will be handed a drawstring bag featuring an activity book, crayons, memory card game, and passport holder. Those aged nine to 13 are presented with a Scooby-Doo themed backpack featuring the Museum of Mysteries board game designed to promote Yas Island’s indoor theme park, Warner Bros. World Abu Dhabi.

At Abu Dhabi International Airport, a dedicated family check-in space will be available to minimize queuing and make the journey as smooth as possible. Kids curious about the check-in process can use a small set of stairs at the counters to take a closer look. On board the flight, young travelers will be given their meals first and supplied with Warner Bros. World Abu Dhabi–themed cutlery. The menu has been refreshed based on feedback from family travelers, and as a result, requested traditional children’s favorites such as fusilli with meatballs, waffles, and pancakes have been added to the selection.

Young flyers will also be entertained by a children’s section on Etihad’s inflight entertainment, designed in a fun, kid-friendly format. Aside from the wide range of family-friendly Warner Bros. movies and TV shows (including Space Jam, Scooby-Doo, Tom and Jerry, Looney Tunes, and The Flintstones), kids can enjoy age-appropriate music albums plus a variety of e-games that can also be played seat-to-seat. Teens will get to watch a selection of TV shows from the DC Universe, such as Batman, Justice League, and Teen Titans.