Fiji Airways’ new brand identity has taken off in the Asia Pacific, shedding its previous moniker, Air Pacific. The company has begun a total rebranding process updating its cabins and logo, as well as new services.

“Air Pacific will be returning to its 1951 roots with new ‘Fiji Airways’ branding as well as new services, new products, and new crew uniforms that are authentic, distinctive and true to our friendly Fijian culture and heritage,” said Dave Pflieger, Air Pacific’s Managing Director and CEO, in a statement.

The airline has unveiled its new logo reflecting traditional Fijian print, which is echoed throughout the cabin and in flight attendant garb. Fijian designer, Alexandra Poenaru-Philp, created the outfits with modern Fiji in mind.

Fiji Airways also appointed a new CEO, Stefan Pichler, a former executive at Virgin Australia. According to The Australian, he played a part in transforming the airline from a low-cost carrier to network airline and launched the long-haul carrier, V Australia.

Fiji Airways serendipitously disclosed their earnings following the rebrand announcement, and posted an increase in financial profits and 14,000 more passengers this year than the year prior. 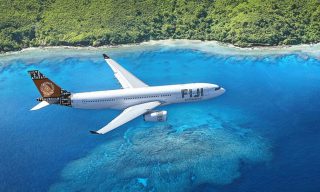 With this new platform, travelers can enjoy more services and benefits across an even more extensive...