Finland’s flag carrier is poised to reconnect Helsinki to Hong Kong from July 8, when nonstop flights between the two cities aboard Airbus 350-900s will resume on a weekly basis. However, passengers should expect journey times to be significantly longer due to the ongoing closure of Russian airspace. Flight AY 99 will take off from Helsinki-Vantaa at 12:05 a.m. on Thursdays and land in Hong Kong at 5:15 p.m. the same day after 12 hours and 10 minutes in the air. Clocking in at an estimated 14 hours and 10 minutes on the return, westbound Flight AY100 will depart Hong Kong at 8:45 p.m. every Friday and arrive in Helsinki at 5:55 a.m. the following morning. Both services are timed to offer travelers more seamless connections to/from Europe and the United States.

Finnair suspended its regular Hong Kong service in February after local government regulations made operations on the route untenable. The airline uses a mixed staffing arrangement made up of Finnish pilots and locally based cabin crew, who will be quarantined for seven days after each flight. This comes off as a strange move as Hong Kong authorities have recently cut the mandatory self-isolation period for passenger air crews to three days.

Meanwhile, AirAsia has just announced the resumption of its Kuala Lumpur–Hong Kong route starting from July 3, albeit on a much-reduced frequency compared to pre-Covid times. Taking four hours each way, the services will run on Sundays and Wednesdays, when Flight AK 138 is scheduled to leave Kuala Lumpur at 7:15 a.m. and touch down in Hong Kong at 11:15 a.m. Then, after a quick turnaround time of just 40 minutes, Flight AK 139 will take off at 11:55 a.m. and return to Kuala Lumpur at 3:55 p.m.

Find out more at finnair.com and airasia.com. 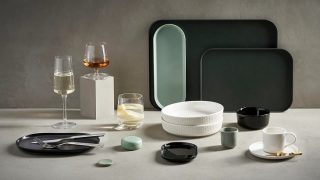 All-new tableware and textiles will bring together Middle Eastern luxury and Italian elegance at 30,...