Most visitors to Hong Kong make the mistake of sticking only to the city streets, even though 40 percent of the territory’s land area is protected as country park. These walking routes through five different country parks offer a new perspective on the place with a healthy dose of fresh air. 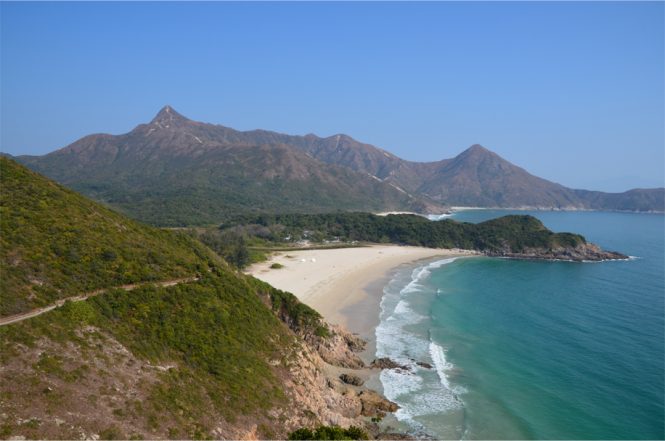 Stretching across the breadth of the New Territories, the MacLehose Trail begins its 100-kilometer journey on the Sai Kung Peninsula. The highlight here is undoubtedly Tai Long Wan, whose four postcard-perfect beaches are accessible only on foot or by a chartered speedboat. A moderate hike of about 10 kilometers begins at Sai Wan Pavilion (take bus 29R outside the McDonald’s in Sai Kung town), from where it’s an easy half-hour stroll to the first beach at Sai Wan. Roughly 40 minutes down the trail, the even larger cream-colored beach at Ham Tin Wan is a popular weekend camping spot and destination for summertime “junk boat” cruises. You’ll want to break for lunch at Ham Tin Wan even if it’s a weekday. From the beach, a rickety plank bridge spanning a tidal creek leads to Hoi Fung Store, an open-air eatery that does a deliciously smoky Singapore noodles (a Hong Kong staple), as well as generous portions of salt-and-pepper squid and sweet and sour fish, all cooked in huge woks with firewood. It’s worth veering off the MacLehose Trail to take a barefoot stroll along the powder-soft sand of Tai Wan beach, a short scramble over the headland from Ham Tin Wan (there’s also a clearly marked footpath around the back). On the way out, you’ll pass through the 200-year-old village of Chek Keng beside a mangrove-lined inlet, and ascend almost 150 meters through jungled terrain to finish at Pak Tam Au, where passing double-decker buses will ferry you back to Sai Kung town. 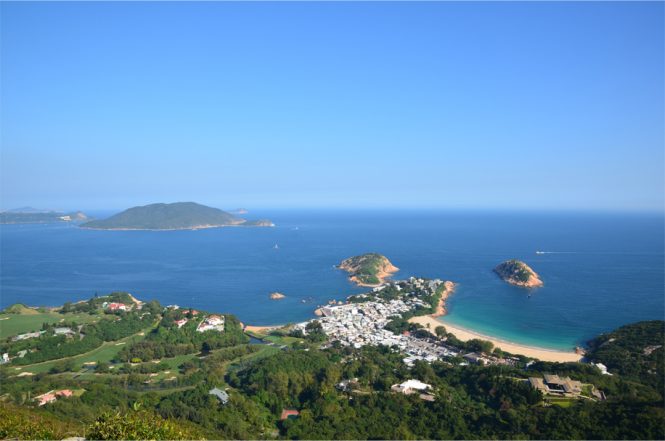 The view over Shek O village from Dragon’s Back.

Time magazine declared this Asia’s best urban hike back in 2004, and its appeal remains as strong as ever, with the route drawing a steady stream of locals and tourists alike on weekends and public holidays. Easily reached via public transport, the eight-kilometer trail in southeastern Hong Kong Island is a must-do hike even for travelers who are short on time. After conquering the steep, relentless ascent at the start, you’ll be rewarded with a jaw-dropping view over Shek O village and its namesake beach. The pathway then continues over the hilltops, before dipping into a forest and descending to the surfer’s haven of Big Wave Bay. Look out for a paved pathway along the shoreline above the beach—it leads to a prehistoric rock carving that was only discovered in 1970. The trailhead at To Tei Wan is accessible by double-decker bus (No. 9) from Shau Kei Wan MTR station; bring a sunhat and sunscreen as there is little shade throughout the first half of the hike. 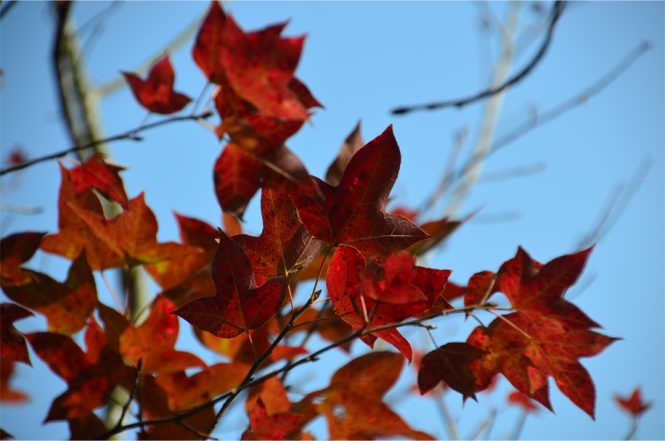 Once used as a walking route by local farmers who tilled the plains of the New Territories to bring their produce over the hills to the market town of Tsuen Wan, the 14-kilometer Yuen Tsuen Ancient Trail still sees plenty of foot traffic, although purely of the recreational kind. A pavilion at its highest point offers panoramic vistas of Tsuen Wan (now a bustling part of town) and the Rambler Channel, a sheltered body of water home to Hong Kong’s main container port. Look further to the southwest and you’ll also spot the landmark Tsing Ma Bridge as well as the mountains of Lantau Island. Most walkers break for lunch at an idyllic campsite in a grassy glade; the route skirts the northern tip of the scenic Tai Lam Chung Reservoir, where it meets the MacLehose Trail, and ends at the village of Tai Tong. The latter is now an unlikely social media star thanks to a stand of sweet gum trees found uphill, whose leaves turn red each winter (typically between late November and the end of January). 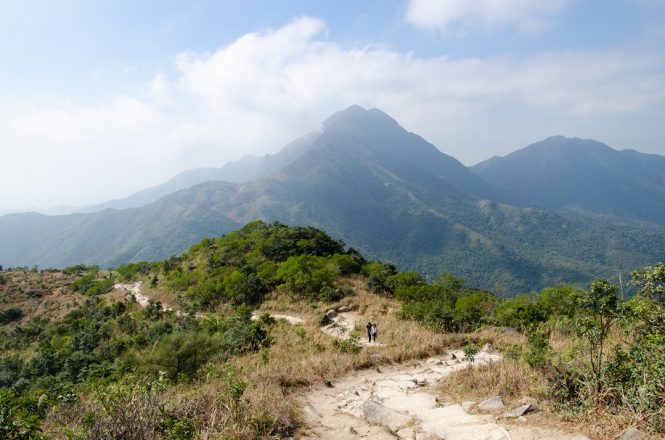 Hikers on the punishing ascent up Sunset Peak.

If you want a heart-pumping experience of Lantau, try tackling this 6.5-kilometer hike that takes in Sunset Peak, at 869 meters the third-highest mountain in Hong Kong. From the trailhead at Pak Kung Au, the first two kilometers involves a serious ascent with more than 400 meters of elevation gain, although the good news is that the altitude levels out and the path follows a gradual downhill course along the ridgeline through swathes of silvergrass. Past the basalt-block mountain huts built as a retreat for Christian missionaries, look north for views to the airport and the apartment blocks of Tung Chung new town. Several turns on the descent reveal the bays of eastern Lantau, and on a clear day, smaller offshore islands. As at Dragon’s Back, much of the Lantau Trail is exposed, so make sure you have adequate sun protection and supplies of water. Bus 3M between Tung Chung and the seaside town of Mui Wo regularly stops at Pak Kung Au. The quiet lanes of Lai Chi Wo village.

Hidden in the northeastern New Territories, and just a stone’s throw from the border with mainland China, the 400-year-old Hakka village of Lai Chi Wo (literally “Lychee Nest”) provides a fascinating detour from the end-of-the-road hamlet of Wu Kau Tang. Expect a two-hour romp down rocky dirt trails through bamboo forests and a lush valley carved out by a mountain streams; the views eventually open up to mangrove swamps and the placid waters of a marine park. Lai Chi Wo is home to a small geo-heritage center that offers guided tours of the village on Sundays and public holidays, but you won’t have to wait till the weekend to wander its lanes and explore the feng shui woodland planted to safeguard its prosperity (evidently, it has not stopped the settlement from emptying out in recent decades). Come during Chinese New Year and you might see the few remaining villagers set off firecrackers, a practice that has been banned in city limits since the 1960s.