London’s Heathrow Airport has come a long way since it first opened in May 31, 1946. Initially intended to serve as an airfield for long-distance military aircraft during World War II, the airport has since grown to become the busiest commercial hub for air travelers in the country and the third busiest in the world, managing approximately 73 million passengers annually.

Celebrating its 70th anniversary this year, Heathrow, which takes its name from a nearby hamlet, has planned a series of programs to mark key moments in its transformation over the past years, involving colleagues, passengers, and the local community.

“I feel very privileged to have seen Heathrow develop and grow from its first day in 1946,” said Keith Haywood, 87, Heathrow’s longest standing employee who has worked at the airport for 70 years, starting the age of 17.

The airport has since 2003 invested approximately US$17.6 billion to improve airport experience for passengers, equipping it with modern world-class facilities. Such pursuits have since earned the airport accolades, including being voted the world’s best by the Independent Travel Awards, the best airport in western Europe by Skytrax World Airport Awards, and with its Terminal 5 being voted the world’s best terminal by passengers for four consecutive years. Heathrow’s Terminal 2, its newest terminal, is also the only airport in the world with a BREEAM certification under its belt, highlighting the property’s sustainable design and energy management.

“Heathrow has come a long way from being a military airfield to a national asset which is now a globally recognized brand,” Heathrow chief executive John Holland Kaye said in a statement. “I am very proud to be a part of ‘Team Heathrow’ and the 75,000 colleagues helping to make every passenger’s journey better. I’m looking forward to celebrating the history of this amazing airport this year but I’m also looking forward to the next 70 years as Heathrow aims to be the best connected and most environmentally responsible airport in the world.” 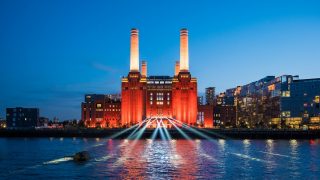