Guests can expect a fully immersive experience where they can become “active citizens of the galaxy”. For those who can’t get enough news about Disney’s upcoming Star Wars: Galaxy’s Edge park at Walt Disney World Resort in Orlando, Florida, Disney Parks has just released a teaser video detailing the Star Wars–inspired hotel that’s slated to debut alongside the much-anticipated theme park in 2019.

Guests of the 400-room, as-yet-to-be-named property can expect to live out their very own epic space opera from the moment they check in. Think: Dressing up in costumes (Jedi or Sith? Take your pick), boarding a starship alive with Star Wars characters, and, at the adjacent park, piloting their own Millennium Falcon. According to a blog post shared by Disney Parks, this first-of-its-kind resort will “combine luxury with complete immersion into an authentic Star Wars story.”

Based on the teaser video, guests will also be able to hang out at a lobby area that resembles the inside of a space ship, with X-wings and TIE fighters zooming around outside in the “outer space.” Those wishing to bring the experience back home can also treat themselves to unique Star Wars toys at the Toydarian street market. The Toydarian character which was first introduced in Star Wars: The Phantom Menace, will reportedly sell handcrafted toys made by local artisans.

Can’t wait to board your very own starship? Check out the video above. 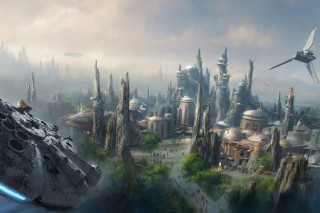