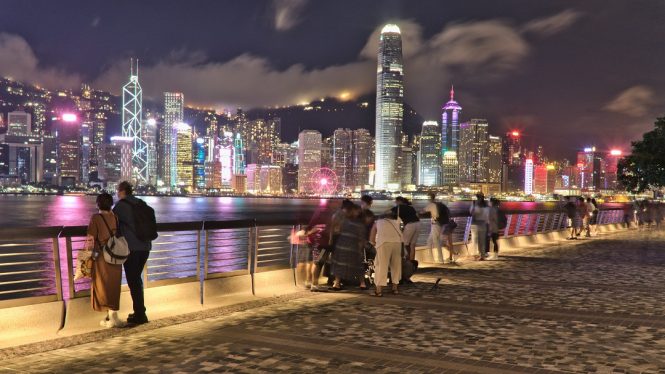 Taking in the view of Victoria Harbour from Kowloon. (Photo: Chromatograph/Unsplash)

As coronavirus case numbers in Hong Kong are plateauing since a peak in early September — with new infections hovering at around 5,000 per day — authorities have given the green light for social distancing measures to be “suitably relaxed further” from Thursday, November 3. All restrictions on both dine-in hours for eateries and operating hours for gyms, entertainment venues, sports centers, and public facilities will be lifted. Capacity has been set at 75 percent at bars and pubs, while up to 12 people per table are allowed at restaurants. Banquets can have no more than 240 people, all of whom must show a negative result from an RAT or PCR test taken within 24 hours or 48 hours, respectively.

Barbecue sites will be reopened for the first time in months, with a maximum of 12 people at each individual pit in line with restaurant rules. Meanwhile, those taking photos on stage at weddings and other events will be exempt from mask-wearing rules. But the broader outdoor and indoor mask mandate will remain in place for the foreseeable future to protect more vulnerable segments of the population; officials hope to boost vaccination rates among the elderly and children before rescinding those rules.

Hong Kong’s social distancing measures were previously loosened on October 20, when the government raised the maximum number of people allowed in public gatherings from four to 12, and ended the ban on live music and dancing inside restaurants, bars, nightclubs, and hotels. Eating and drinking outdoors is now permitted in theme parks. While authorities continue to follow this piecemeal approach, there are growing calls from the public for a clear roadmap toward ending all Covid-19 restrictions on international arrivals. Visitors to the city currently face the prospect of being unable to dine out or visit indoor attractions during their first three days under the “0+3” quarantine-free arrangement.