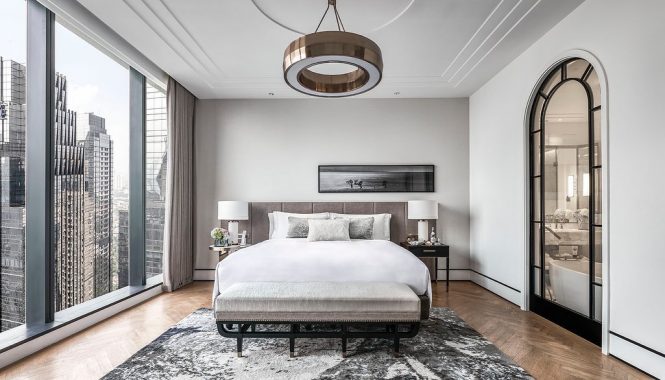 Residents of Indonesia’s ever-evolving capital now have a new choice in town for an ultra-luxe staycation. Opening this afternoon, The Langham, Jakarta occupies the uppermost stories of a glass-and-steel skyscraper in the Sudirman Central Business District, promising panoramic views over the cityscape, an exciting culinary lineup, and a sophisticated design (by Smallwood Reynolds Stewart Stewart, Wilson Associates, and AvroKo) that impresses from the get-go.

At the ground-floor arrival lobby, guests are greeted by the sight of Haven, a massive bespoke chandelier by Lasvit, whose in-house designer Jana Růžičková conceptualized the installation as a kaleidoscope of 3,000 glass butterflies nodding to Indonesia’s biodiversity. (Coincidentally, there’s a widespread local belief that encountering a butterfly signals the arrival of a special guest.) High-speed express elevators then whisk guests to a magnificent Sky Lobby perched on the 62nd floor, where check-in is typically carried out. Adjacent to this soaring space is a marble-clad spiral staircase with a second, 10-meter-high chandelier, also by Růžičková. 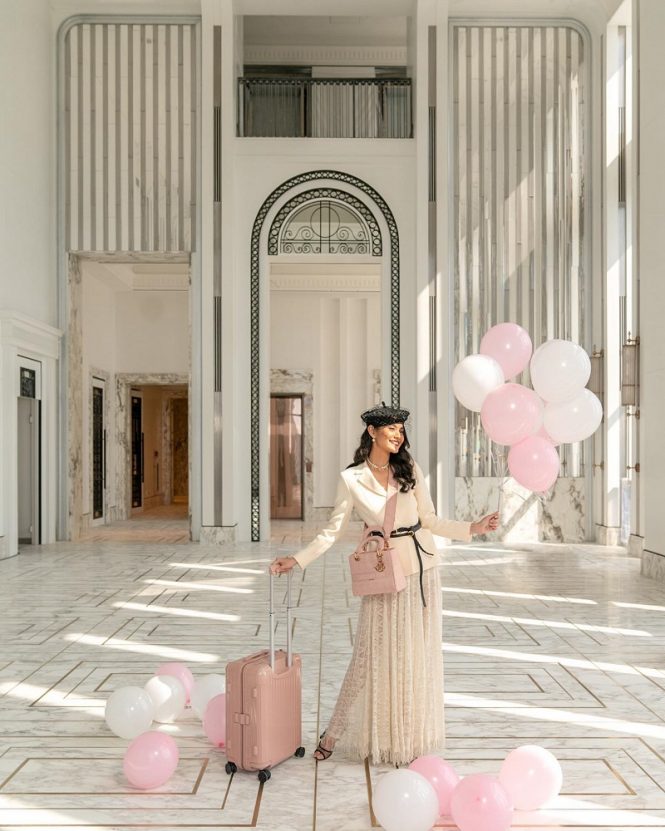 Inside the 62nd-floor Sky Lobby at The Langham, Jakarta.

Langham Hospitality Group’s debut property in Southeast Asia features 223 high-ceilinged guest rooms and suites, all with marble bathrooms featuring deep soaking tubs, and floor-to-ceiling windows that frame sweeping city views; high-tech touches include motion-activated sensors and electronic sheer curtains. Guest quarters are generously sized, with entry-level Deluxe rooms starting from at least 42 square meters. Those booked into a suite will have access to the exclusive Langham Club Lounge on the 59th floor, where they can relax at a writer’s corner, browse through the tomes at the library, and take advantage of butler service as well as private check-in and checkout facilities.

At the top of the line is the hotel’s 336-square-metre Presidential Suite, which features an oversize bathtub and spa bath, bespoke Langham amenities, a spacious living and dining area, and an outdoor terrace. In addition, the suite comes with an in-suite gym and trainer on demand for private fitness sessions, while other perks include a 24-hour Private Kitchen dining service and added privileges at the Langham Club Lounge. 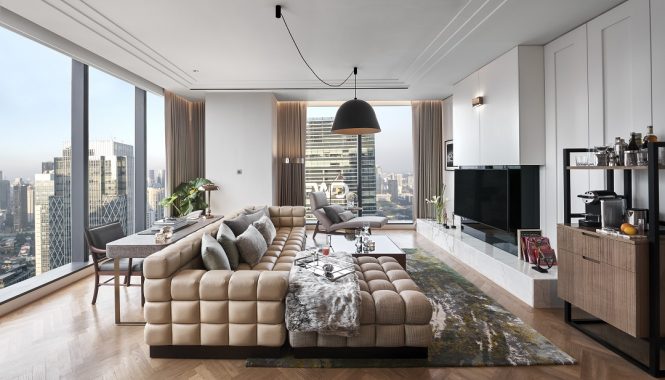 The living room of a 109-square-meter One Bedroom suite. 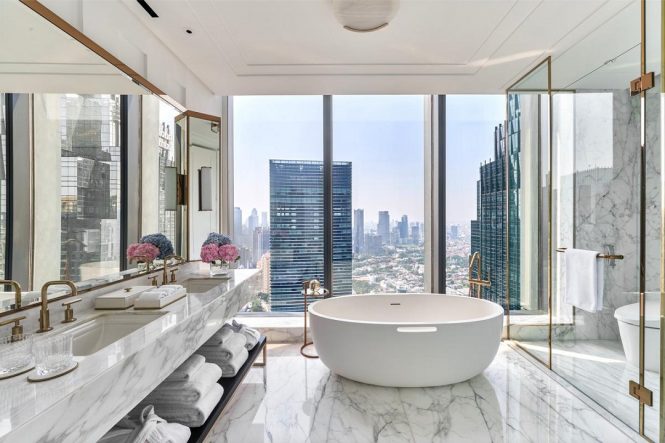 Inside the marble-clad bathroom of an Executive Cityscape room.

The Langham, Jakarta is also set to become something of a culinary destination. The hotel has teamed up with one of the United Kingdom’s top celebrity chefs to launch Tom’s by Tom Aikens, and there’s also an offshoot of three-Michelin-starred Cantonese restaurant T’ang Court at The Langham, Hong Kong (set to open in 2022). Another exciting collaboration, this time with Iron Chef Masaharu Morimoto, will see the high-end Japanese venue Morimoto debut in the coming months. Alice, located on the hotel’s ground floor, offers classic high tea each afternoon, with scones, finger sandwiches, and bite-size pastries such as macarons and mille-feuille. (The tradition was popularized at The Langham, London, which became the first hotel in the British capital to serve afternoon tea back when it opened in 1865.) Cocktail connoisseurs can look forward to sundowners on the rooftop, which will soon be home to an outpost of the Artesian at The Langham, London, a legendary four-time winner of The World’s 50 Best Bars. 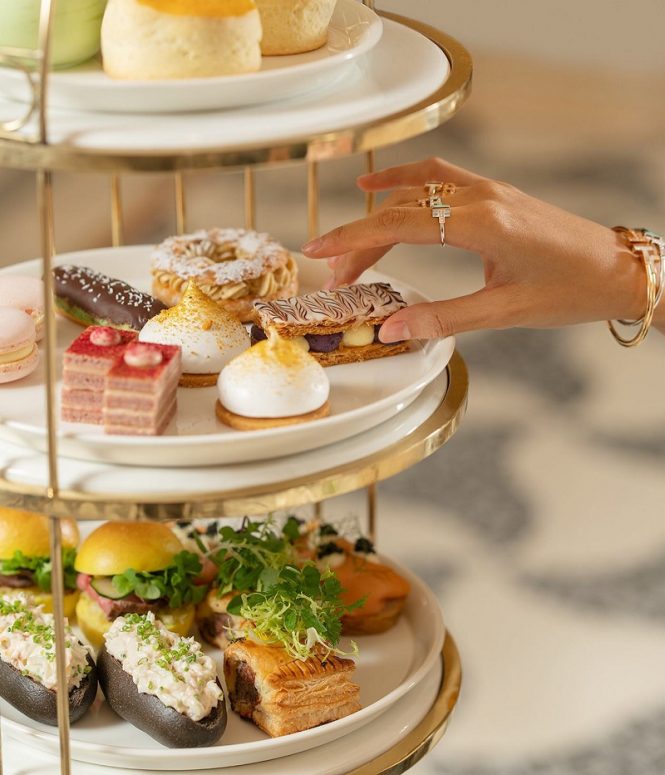 Wellness-minded guests can unwind after a day of work or exploring the city at Chuan Spa, which offers treatments inspired by Traditional Chinese Medicine in a meditative setting. Spanning 670 square meters, the facility also features a fitness center and Jakarta’s highest indoor infinity pool.

Another drawcard? The curated collection of Indonesian contemporary art showcased throughout the hotel. Expect to see works by renowned painter Hanafi and award-winning photographers Jay Subyakto, Dilla Djalil Daniel, and Chaerul Uma, along with other prominent local artists such as John Martono, whose mixed media pieces combine textile science, embroidery, and painting on silk.

Additionally, The Langham, Jakarta provides a suitable backdrop for social events, weddings, high-level conferences, and luxury product launches. The property has more than 2,100 square meters of flexible space, including an expansive 688-square-meter ballroom and an outdoor garden, alongside eleven meeting rooms that can be configured for events of different sizes. When borders gradually reopen, international business and leisure travelers alike will have plenty of reasons to check in to Jakarta’s newest ultra-luxe lodgings. 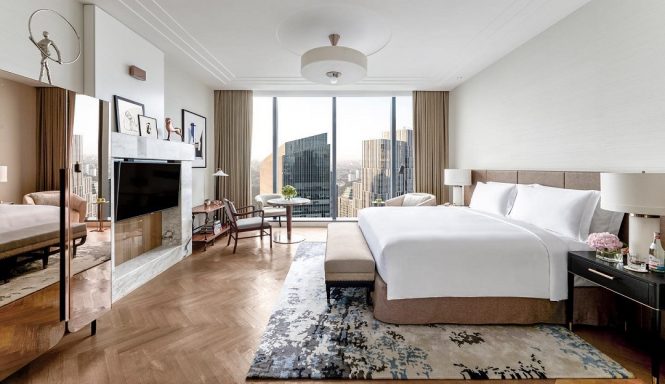 A Deluxe Skyline room at The Langham, Jakarta.

Bali is Partially Reopening on October 14

Travelers from selected countries such as China, Japan, and New Zealand will be able to visit once m...