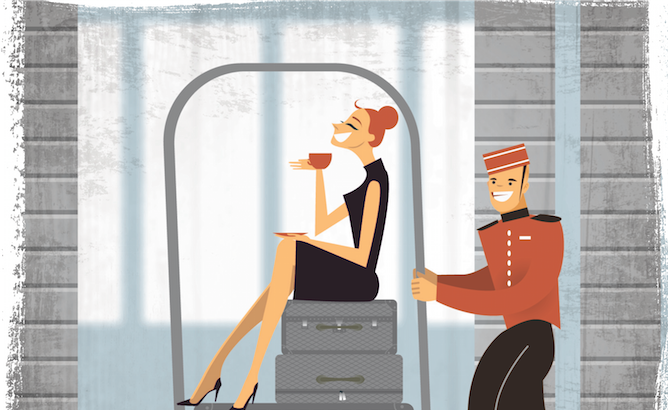 Hotel chains are upgrading their loyalty programs as never before. We explain how to reap the benefits

There has never been a better time to be a member of a hotel loyalty program. Throughout the troubled economic times of the past decade, especially beginning in 2008, hotels saw occupancy rates drop significantly, and the big groups like Hyatt, InterContinental, and Starwood turned to their heaviest weapon for getting people back into hotel rooms—their loyalty programs. Since then, competition has been fierce. Hotels have rolled out lucrative promotions to members, including expedited accrual of free room nights, massive point bonuses, and enhanced offers for frequent guests in the form of suite upgrades. The bottom line: hotel points are on the up.

“These programs are certainly getting more lucrative,” says Gary Leff, co-founder of frequent-flier community Milepoint.com. “There are exceptional values. In a couple weeks, I head to the Conrad Koh Samui for an HHonors points redemption—a 2,000-square-foot, two-story ocean villa with a private pool. Then in February, I’ll be at the Park Hyatt Maldives on points.”

So what are the major hotel chains doing to generate loyalty, aside from offering more points? And who’s doing the best job? One recent Starwood promotion offered a free night at one of the group’s higher-end resort properties for every three stays at any participating Starwood hotel. That gave a business traveler extra motivation to choose, say, a Sheraton, because those complimentary nights could be put to use at a much more luxe St. Regis hotel at a later date. Earlier this year, Marriott Rewards took things a step further by offering one free night’s accommodation for every two stays. In addition, Starwood Preferred Guest, Hilton HHonors, and InterContinental’s Priority Club now offer the option of using a combination of cash and points to book hotel rooms, which can often work out to be much better value than a simple all-points redemption.

Hyatt uses the refrain: “Points are really possibilities waiting to happen. So what possibilities will you discover?” This is the key to the appeal of hotel loyalty programs—the promise of elevation over other guests and staying in rooms one wouldn’t normally be able to afford. The promise of better treatment is a further aspirational carrot.

“Hyatt Gold Passport is the most lucrative major program for a top-tier elite,” Leff says. “InterContinental Royal Ambassador is arguably even better, but there are relatively few InterContinental-branded properties.” Indeed, Hyatt has surged forward recently in terms of benefits for elites, offering confirmed suite upgrades, complimentary full breakfast, and a 4 p.m. checkout. InterContinental now offers 8 a.m. check-in for their top-tier Royal Ambassadors, and free access to the in-room minibar, though as Leff points out, these perks are only valid at InterContinentals, not at all hotels within the group.

Though occupancy rates are now looking healthier and hotels don’t have to do quite as much to fill beds, the array of loyalty programs on offer has raised the benchmark for what guests expect from high-end hotels. And this is especially true for elite program members. In their battle for market share, hotels have seen how effective point bonuses, suite upgrades, and late checkout privileges are at luring back those who might otherwise select accommodations based on price.

“Elites are huge,” Leff says. “Elite members drive profitability, representing an outsize proportion of room nights, and they’re the ones hotel programs can most influence purchase decisions from. That’s why there’s been a real push to improve benefits.”

In other words, the big hotel groups want to make sure these road warriors keep coming back, so they’re endlessly improving existing benefits and coming up with new ones. Each of these changes tends to be incremental—adding an hour or two to the checkout time, for example. But as hotels duke it out, each vying to be more attractive than the next, these incentives stack up.

“Loyalty programs are very competitive,” says Michelle Grant, a research manager at Euromonitor International. “If one player enacts something, others will follow.”

Research has shown that even if they don’t spend enough nights at hotels to qualify for elite status, loyalty program members generate a lot of repeat business. According to Euromonitor International, the numbers are impressive. Members of InterContinental’s Priority Club—the largest loyalty program in the world—generated 35 percent of the group’s US$6.6 billion revenue in 2010. At Marriott in the same year, 50 percent of all rooms were booked by Rewards program members. Starwood Preferred Guests represented a similar portion of bookings, but revenue on those stays amounted to more than 50 percent of the group’s total, indicating that the program’s members spend more than other guests. Starwood also reported that promotions targeted at program members earned over US$1 billion in 2010.

Loyalty programs are big business, and hotels have to stay on their toes so as not to be outpaced. “These programs allow the building of detailed client profiles,” Grant says. “Companies are expected to leverage this not only to improve the customer experience, but also to drive additional revenues.”

For many reward plans, that means the major focal point now is the diversification of earning and redemption options. InterContinental’s Priority Club and Starwood both now let members book flights directly using points, the amount contingent on the price of the flight in question. And the rewards don’t stop at flights. Grant notes that hotels are increasingly adding “experiential” awards to their range of offerings “to combat the commodification of programs, differentiate themselves aside from their branding, and to offer rewards to those not wishing to travel.”

This has been a trend in many point programs across various industries of late—offering the option of obtaining, for example, tickets to a concert using points, instead of just putting them toward more free travel. Starwood, for example, has launched a program called Moments, in which members can use points toward tickets to concerts, sporting events, film premieres, and more. In one such event this past October, program members had the chance to attend a private concert by Khalil Fong at Hong Kong’s W Hotel, with space for around 100 people.

Previously not an advocate of loyalty schemes, Ritz-Carlton has now also gotten in on the act. The group’s new Rewards program offers many of the standard hotel perks to regular guests, but they’ve also partnered up with high-end companies to offer unique ways to redeem points, whether it’s a private shopping expedition at Neiman Marcus, a bespoke travel experience courtesy of Abercrombie & Kent, or a workshop with a National Geographic photographer in any number of Ritz-Carlton locations.

The trend toward offering exclusive access to members begins to get at what is perhaps the biggest drive of hotel loyalty programs, and the aspect they’re working on most closely: personalized guest recognition. This has always been a difficult one to manage, especially considering the size of the major chains—making guests feel like their individual needs and desires are being looked after, as they might at a smaller boutique property where they’re a regular guest and known by name.

“We’re realizing that this isn’t just about a loyalty program,” says Vicky Yau, director of loyalty marketing at Hyatt Gold Passport. “It’s about a journey, a strategic business goal, and a way to truly reach and engage with our loyal members. It is very important for us to take the time to learn the preferences, be-haviors, likes, and dislikes of our members.”

Leff believes that we will see this kind of elite focus growing because these types of recognition benefits are relatively low-cost, yet have a major impact. “Starwood has tried with their Ambassador program to build personal relationships with their most lucrative members, Hyatt has Private Line agents designated to their top members,” Leff says. “Both programs have a long way to go, but providing better service at the top end is an area that multiple programs are working on.”

What else, then? “Eventually someone will match InterContinental Royal Ambassador’s 8 a.m. check-in,” Leff says.

For guests fresh off a red-eye flight, that would be good news indeed.