Take a virtual tour of four sakura-viewing hot spots in the United States and Japan through these webcams. 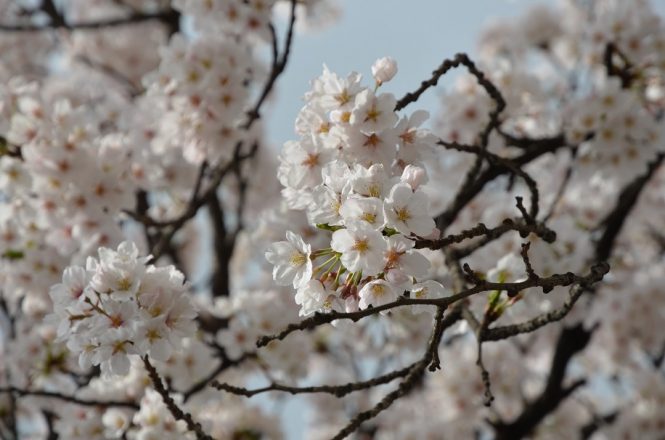 Spring has arrived in much of the Northern Hemisphere, though with millions now unable to leave their homes to celebrate the warming weather, viewing cherry blossoms in person is off the cards. But a number of webcams are making it possible to admire the fleeting beauty of this much-awaited annual display from the comfort of your living room.

In Tokyo, Kitanomaru Park⁠—a portion of the Imperial Palace that was opened to the public in 1949⁠—is considered one of the city’s top places for viewing sakura. Known for its 700-meter-long pink “tunnel” created by hundreds of cherry trees lining an old defensive palace moat, the gardens attract plenty of boaters and revelers under normal conditions. Watch the sakura in real-time, with flower-festooned branches swaying visibly in the breeze, by clicking this video link.

Another webcam on Honshu island is well worth a look. Less than two hours up the tracks via Shinkansen from Tokyo Station, the historic castle town of Ueda in northern Nagano prefecture holds its annual Senbon Sakura Matsuri (1,000 Cherry Blossoms) festival in the verdant grounds of Ueda Castle Park, where the reconstructed gateway and turrets of the long-lost 16th-century citadel act as a suitably traditional backdrop in this livestream.

Over in the United States, the 3,700 cherry trees around Washington, D.C.’s Tidal Basin have just reached peak bloom. With most events at this year’s three-week National Cherry Blossom Festival called off, and residents ordered to stay at home, the event organizers have set up a live bloom cam that will capture the spectacle over the next few weeks from a series of different angles.

Cherry trees are also now in full bloom in the Pacific Northwest. Thousands typically flock to the University of Washington in Seattle each spring to visit The Quad, a green space planted with a ring of 87-year-old Yoshino cherry trees, but with the entirety of Washington State under a “stay at home” order as of a few hours ago, the next best option is to see them through the lens of a camera overlooking The Quad. For those who want to take a closer look, the university also has a Facebook album and an account for its cherry blossoms on Twitter.