Already a destination unto itself, Singapore’s airport shines even brighter with the opening of its latest attraction. If you visit Jewel after dark, be sure to catch the animated light shows.

Moshe Safdie, the revered Israeli-Canadian architect who gave the Singapore skyline one of its most-photographed icons, Marina Bay Sands, has once again left his imprint on the Lion City. A former parking lot between three passenger terminals at Changi Airport is now the five-story Jewel, a landmark that unites Singapore’s decades-long greening effort with two of its national pastimes: eating and shopping. Part botanical garden, part mall and entertainment complex, the facility brings these disparate parts together beneath a dome made up of more than 9,300 glass panels. DO Explore the terraced landscaped gardens of Forest Valley, where a series of waterfalls, walking paths, and quiet seating areas have been tucked amid 1,400 trees and more than 200 plant species. The main attraction here is Rain Vortex, an indoor waterfall—the tallest in the world—that pours 40 meters from a central oculus in the glass roof. If you’re here after dark, be sure to catch the animated light shows. Upstairs, the fifth-floor Canopy Park offers a slew of family-friendly attractions: netted play areas, a giant trampoline, a colorful flower garden and topiary walk, hedge and mirror mazes, even a glass-bottom suspension bridge. A lobster spread at Burger & Lobster.

EAT Try the freshly grilled satay at the newest outpost of Violet Oon, which serves heritage dishes drawn from the city-state’s kaleidoscope of cultures. Song Fa Bak Kut Teh is also worth a stop for its toothsome pork ribs in a signature peppery soup. In the mood for Western comfort food? Grab a bite at the first Southeast Asian branch of gourmet burger brand Shake Shack, a New York cult favourite, or head over to the just-opened Burger & Lobster for buns stuffed with the bounty of the wild Atlantic. And don’t miss the mille crepes at New York cake boutique Lady M. Gifts on display at Supermama.

SHOP Minimalist wearables take pride of place alongside a cool collection of books, accessories, and scents at In Good Company. Singaporean designer retailer Naiise has just opened a two-floor emporium, while Supermama is just the place to pick up gifts ranging from kebaya-patterned porcelain to beautifully illustrated postcards. For kids, the first permanent Pokémon Center in Asia outside Japan is sure to suit. Rooms at Yotelair can be booked for a minimum of four hours.

STAY Located on the fourth floor, the 130-room Yotelair offers compact “cabins” with adjustable beds, mood lighting to reduce jet lag, and rain showers. Rooms here can be booked for a minimum of four hours.

This article originally appeared in the June/July 2019 print issue of DestinAsian magazine (“Jewel In The Crown”). 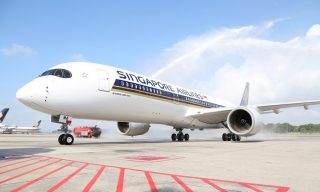