A 12th-century castle in the hills of Chianti is now home to the first COMO hotel in continental Europe. It’s a match made in heaven. 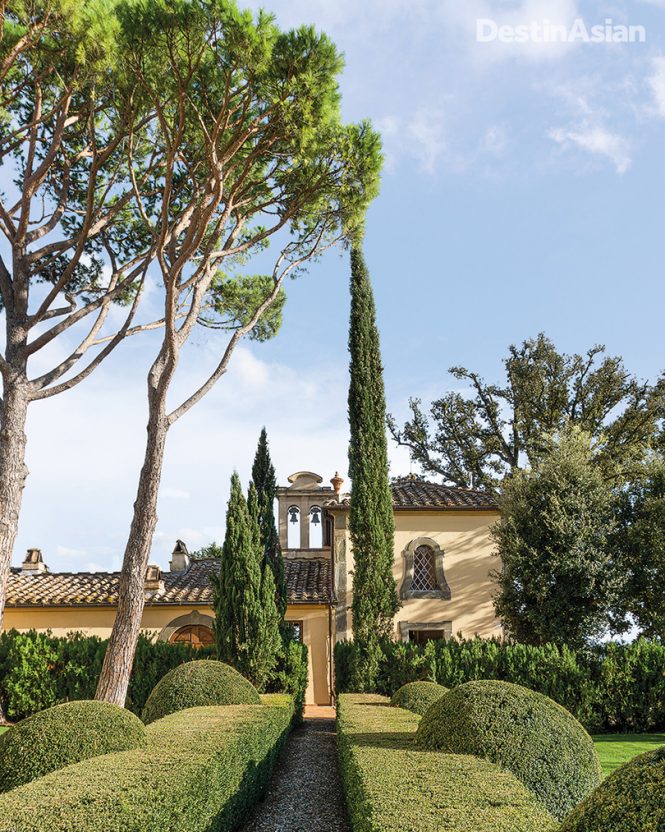 Since its founding in the 12th century, only four names have been associated with the ownership of Castello Del Nero, a 300-hectare estate in the Chianti hills of Tuscany roughly midway between Florence and Siena. The first was Del Nero, a high-ranking family that built the estate’s ocher-hued castle as their country residence in the early days of the Florentine Republic. In 1825, the property passed through marriage to the Torrigiani clan, which owned it until Robert Trotta, an American real estate developer of Italian descent, bought the crumbling old manor and its surrounding olive groves and vineyards in 2000 and spent the next six years transforming it (under the watchful eye of the Italian Fine Arts Commission) into a 50-room hotel and spa. 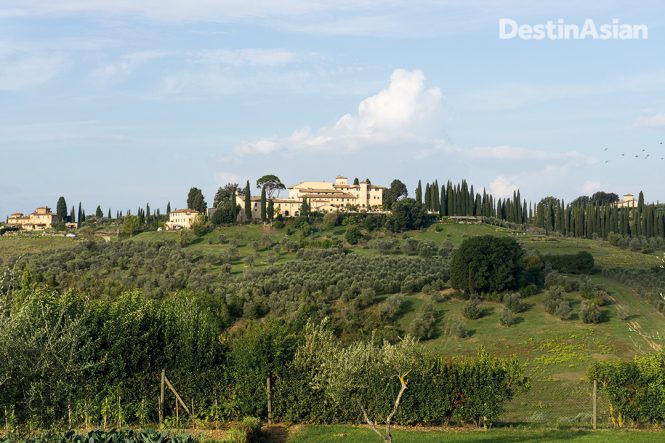 A view of the castle from across the estate.

Now, it all belongs to COMO Hotels and Resorts, a name that might sound vaguely Italian to anyone (and he would have to be a hermit) unfamiliar with the Singapore-based hospitality group. That COMO founder Christina Ong chose Italy for her first hotel in continental Europe is no great surprise; Mrs. Ong, who helped introduce London high-street shoppers to the like of Prada and Bulgari back in the 1990s, has a long association with Italian fashion houses, and is a frequent visitor to the country. Indeed, it was on a family holiday in 2007 that she first stayed at Castello Del Nero. When the property was put on the market a decade later, she snapped it up. 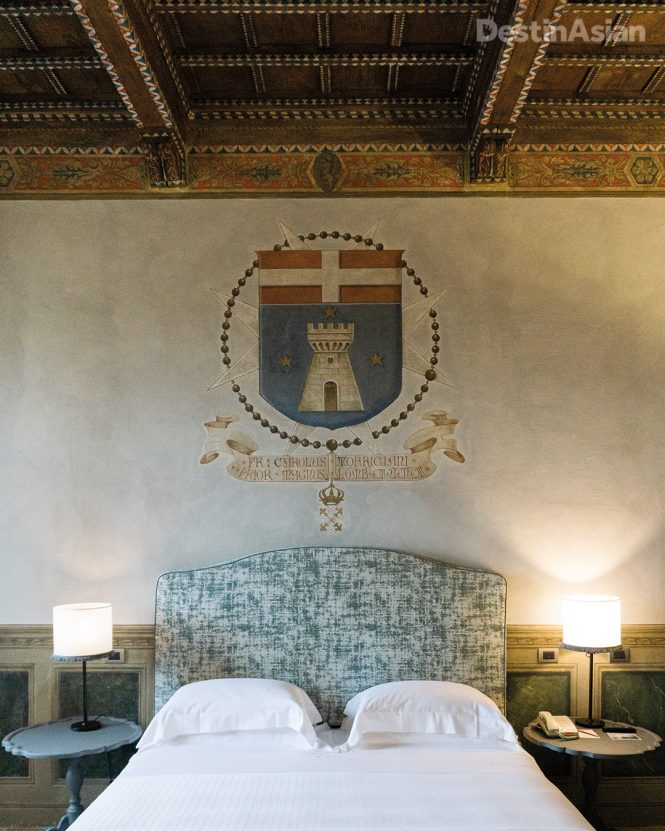 It’s not hard to see why. With its tall clock tower and belfried chapel, classic Italian garden and frescoed walls, the place is utterly romantic—though a refurb was required to bring it in line with COMO’s chic contemporary aesthetic. For this, Ong hired Milanese designer Paola Navone, with whom she had already collaborated on COMO hotels in Phuket, Miami, and Bali. Given the building’s protected heritage status, any changes could only be cosmetic, so Navone set about last winter to “lighten” things up by white-waxing the dark terra-cotta floors in the lobby and other public areas, treating walls with lime milk, and applying a coat of whitewash to oaken ceiling beams and other woodwork. Wall art has been banished, though an echo of it remains in the reception foyer, where squares and ovals of fringed jute take the place of formal frames. The floral upholstery, warm colors, and drapery of the Trotta era are also gone, replaced with muted hues—grays, pale blues—and gauzy curtains that give the rooms a calmer feel. 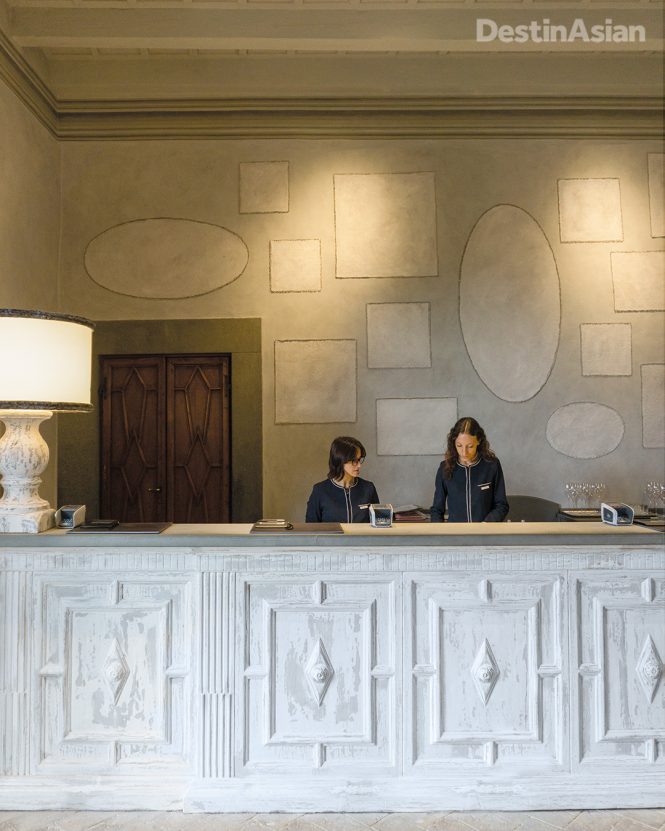 Guests looking for a more traditional Tuscan hotel experience will prefer the three heritage suites in the main building. Though also refurnished in Navone’s streamlined style, they retain original features like painted coffered ceilings, frescoed coats of arms, and canopied fireplaces. No two rooms are alike; my own, a split-level Loft Suite, was located in a tile-roofed annex once used as a farm workshop. Aside from a huge bathroom with a claw-foot tub, it came with a high pitched ceiling and postcard-pretty views across olive groves to the rolling Chianti countryside. 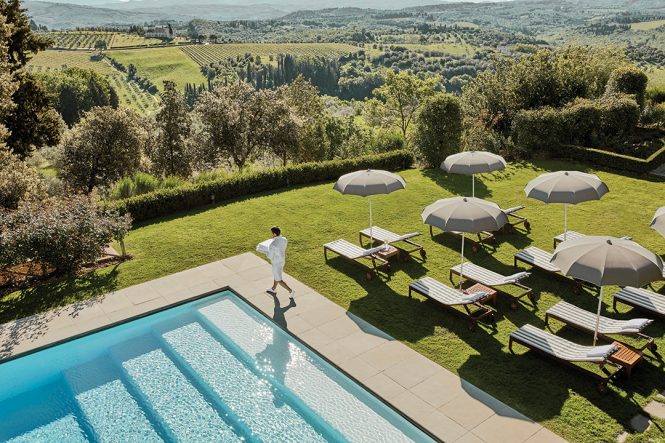 Views of the estate from the pool terrace.

Those surroundings are in fact one of the best reasons to check in. Both Florence and Siena are about half an hour away by car, and the hotel provides a daily shuttle service to each. But there are charming—and much less crowded—attractions nearer at hand. Tavarnelle Val di Pesa, for one. Once a station on the old road to Rome, its compact town center is a 15-minute walk from Castello Del Nero and offers plenty of local character as well as a few good gelaterias and trattorias. Or there’s the atmospheric medieval village of San Donato in Poggio—borrow one of the hotel’s e-bikes to get you there—and Badia di Passignano, a Benedictine abbey visible from the hotel terrace that houses priceless Renaissance frescoes.
Alternatively, you can explore the estate’s gardens, woods, ponds, and Sangiovese grapevines on your own or in the company of farm manager Stephano Panti, who has worked here—like his parents before him—since the Torrigiani days. Ask, and he’ll tell you how an 18th-century forebear of that family, Marquise Teresa Torrigiani, instructed her gardeners to plant an allée of tall cypresses so that she might walk from the castle to its neighboring forest in shade and privacy. Remarkably, the trees are still standing, as is the 350-year-old Lebanon cedar that towers above the neatly clipped hedges in the front garden. 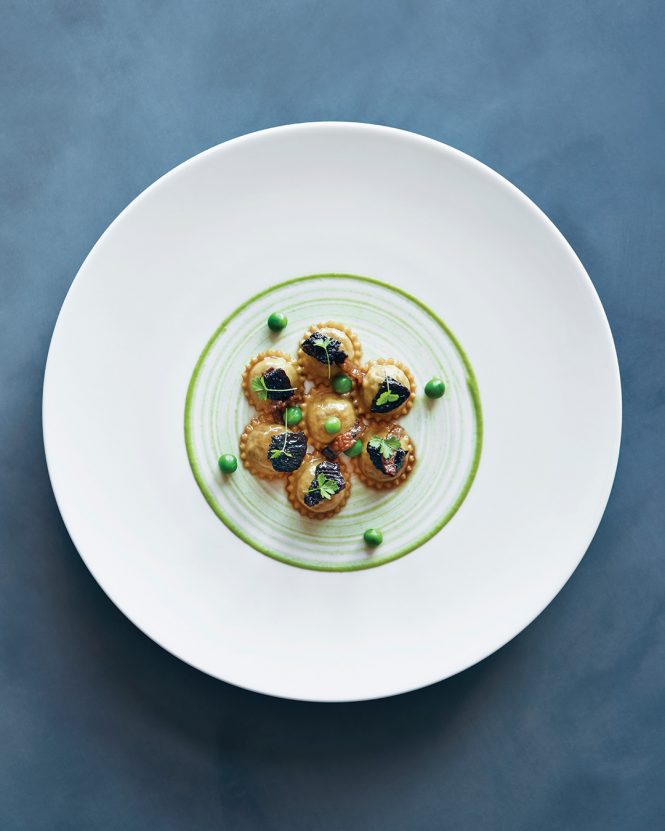 Food remains a centerpiece of the hotel thanks to the continued presence of chef Giovanni Luca Di Pirro, who has supervised the three restaurants here for seven years. La Torre, the estate’s signature dining room, snagged a Michelin star in 2014. Occupying the castle’s original stables, the vaulted space has been touched up by Navone—it’s a little less stiff and formal now, I’m told—but remains Di Pirro’s domain, with seasonal degustation menus that showcase Tuscany’s best seafood, meats, and vegetables. Dinners begin with a selection of amuse-bouches: on the night I dined, these included a tiny carrot enrobed in curry mayo and a tomato filled with olive mousse. Then came roasted octopus drizzled with parsley pesto, pumpkin ravioli with duck ragu, and pigeon in a sweet vin santo sauce, each course matched with one of the 1,000-plus wines in the castle cellars. 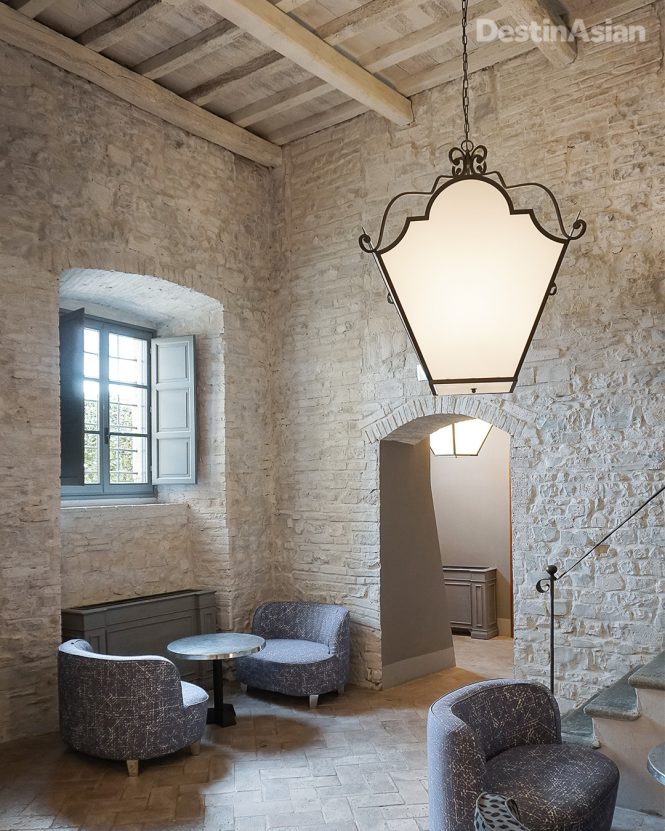 La Taverna is a stone-walled bar and restaurant that occupies the castle’s former kitchen.

La Torre is also where guests have breakfast—a buffet of cheeses, charcuterie, salad greens, freshly baked bread, and egg dishes supplemented with olive oil and honey grown on the estate. Olive oil and locally harvested lavender make their way as well into some of the treatments at the COMO Shambhala Retreat, a hushed wellness center that flanks the heated outdoor swimming pool. Complete with ice fountains, aromatic steam rooms, and an alfresco vitality pool, the spa, originally designed by ESPA founder Susan Harmsworth, was due for a complete overhaul during my visit, and will likely be a much different facility when the hotel reopens in April following its winter closure. But the staff have adapted quickly to the COMO Shambhala ethos and the range of new treatments, which include everything from Indian head massages to salt-and-sugar body scrubs and Guinot facials. Whatever remodeling might be in store, one of the spa’s main assets will always be the view from its relaxation rooms—the hills, the groves, the vines that remind you exactly, happily, where you are. 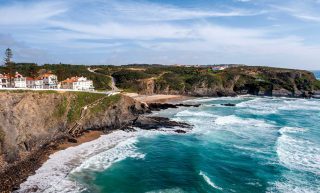 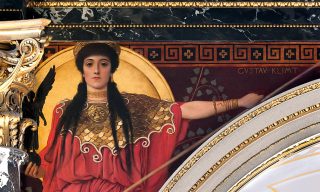 Major Art Anniversaries in Europe Worth Adding to Your Itinerary

Mark your calendar for major art anniversaries in these three European cities. 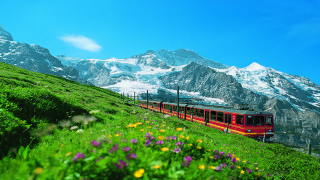 A magnet for lovers of the great outdoors, Interlaken beckons with a raft of accessible adventures, ... 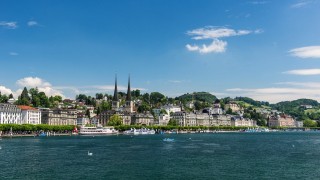 The Enduring Charms of Lucerne

With its lush mountains and enchanting waters, Lucerne shines as one of Switzerland's top destinatio... 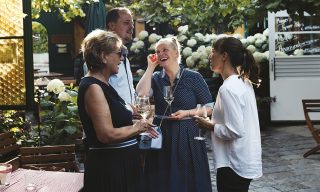