Showcasing the genius of one of Japan’s preeminent architects, a unique 10-room hotel has put down roots in a mountain resort outside Tokyo. There are some things you should know about Shigeru Ban. As a boy, he wanted to become a carpenter. In 1985, just a year after graduating from the School of Architecture at Cooper Union in New York, he opened his own practice in Tokyo. He has an affinity for the works of Alvar Aalto, the great Finnish modernist and a pioneer of sustainable architecture. Ban’s now famous use of paper and cardboard tubing to create quick and effective housing for disaster victims in places like India, Rwanda, and New Zealand began with his design for an Aalto exhibition in Tokyo in 1986. He was awarded the Pritzker Prize in 2014, at the age of 56. He doesn’t like waste. He only wears black. Also, he considers the pencil to be the most useful product ever invented. 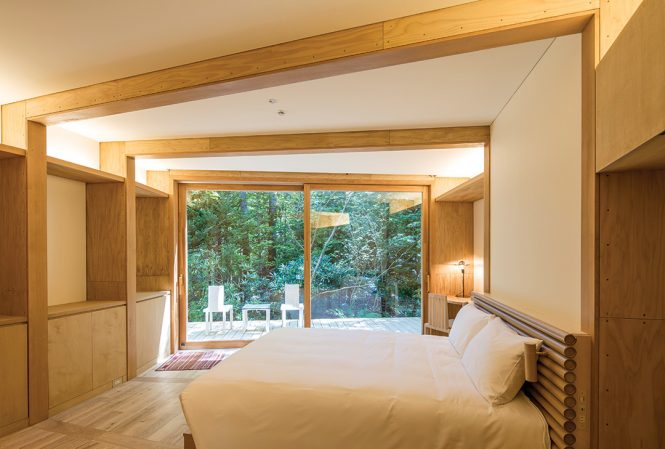 The elegant simplicity of a groundfloor guest room.

You should know these things because they underscore everything at Shishi-Iwa House, a 10-room hotel that opened earlier this year in the mountains outside Tokyo. It’s the brainchild of Singapore-based business partners Huy Hoang and Phillip Wang, who several years ago came up with the idea of building a luxurious but sustainable retreat where like-minded guests could come to contemplate architecture, art, and nature. Hoang, a lean and amiable investment banker, explains, “We have a long history of collecting artwork, and from there it was a natural progression to getting interested in architecture and how it might be used as the foundation for a new kind of hospitality—a place where guests could come to contemplate and socialize and spark new ways of thinking.” 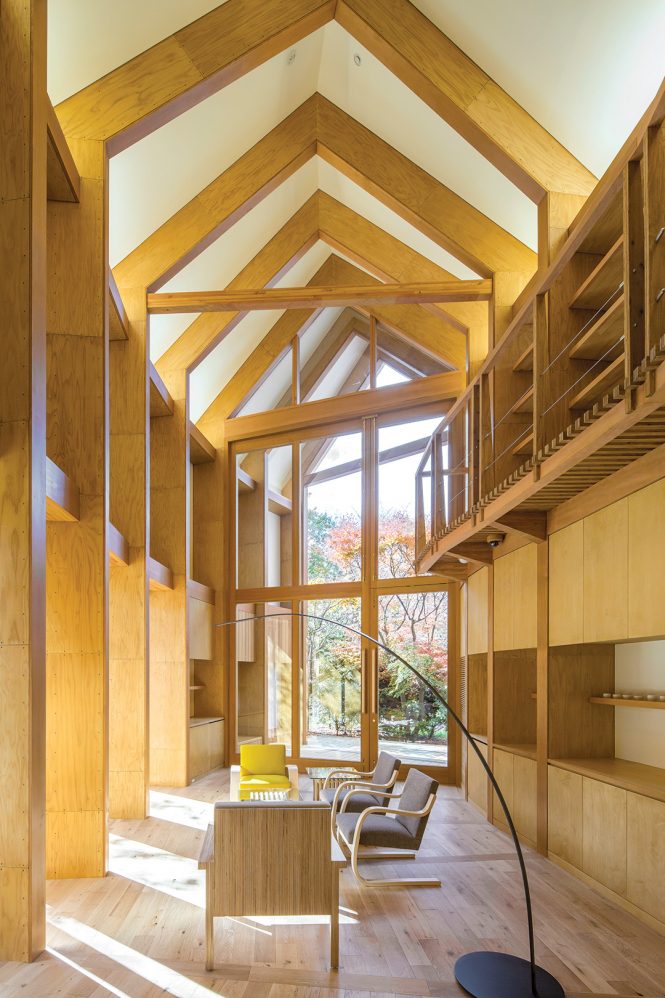 Shigeru Ban’s use of modular structural frames to create the building’s curvilinear footprint is best showcased in the library, a double-height reception area.

After visiting the resort town of Karuizawa one summer, Hoang knew he had found the right location: just over an hour by bullet train from the bustle of central Tokyo, but surrounded by the bucolic beauty of the foothills of Mount Asama, in Nagano Prefecture. All they needed now was an architect with the right credentials. “We were fans of Shigeru Ban already, so we contacted his studio first,” Hoang recalls. “I didn’t really expect him to be interested in our little hotel project—he has a Pritzker after all. But we got him!”

Perhaps part of the draw was that the architect’s commission included everything, from the building itself to the interiors (Ban is also an accomplished industrial designer) and even final say on the site, a wooded roadside plot in the hot spring–laced Naka-Karuizawa area. To preserve as many trees as possible, Ban designed a narrow two-story structure that winds snake-like across the property, an effect achieved through a modular system of 38 A-framed structural sections that were fabricated off-site and then carefully assembled here, each planted at a different angle along the building’s sinuous foundations. True to form, the frames are made of humble but strong materials: a dense honeycomb core of recycled paper sandwiched between panels of plywood, all fastened together by neat rows of steel nails whose heads have been left exposed. “When we first saw the plans, we were like—what?” Hoang says. “But of course we had to trust Shigeru’s vision, and the results are more than we could have imagined. The form, the material, it’s all very pure.” 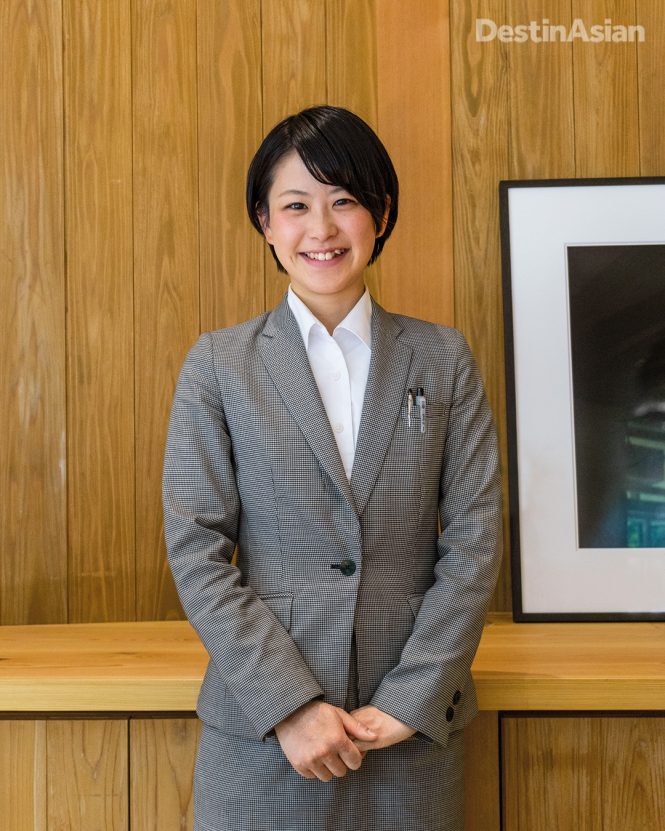 One of Shishi-iwa house’s small but efficient team of staffers.

The technicality of Ban’s design is matched by a discreetly elegant aesthetic. Shishi-Iwa House is clad in warm-hued cedar and windows that overlook an expansive deck, the surrounding foliage, or—on a clear day—the distant peak of Mount Asama. Arriving guests crunch across a gravel driveway to the tall glass doors of the Library, a double-height lobby where the gabled frames rise to an apex eight meters above a floor of pale oak. A wooden walkway suspended halfway up leads to shelves stocked with fine whiskies and design books. Down below, a trio of Alvar Aalto armchairs sit center stage. They’re the only furnishings in the hotel not designed by Ban and his team.

The guest rooms are arranged in clusters of three or four, each sharing a ground-floor lounge and kitchenette (which makes them perfect for families or small groups). Some have balconies, others sport little terraces; those upstairs benefit from their peaked ceilings. They’re not particularly large, and they’re certainly not lavish; there are no TVs, and the lone concession to an otherwise muted palette is a rug repurposed from old Iranian camel saddlebags. But there is a genius to the rooms’ spartan simplicity, from the gently angled layouts to the headboards fashioned from Ban’s signature cardboard tubes to the delicate traditional tile work in the open bathrooms (which are stocked with all-natural toiletries by German brand Stop The Water While Using Me!). 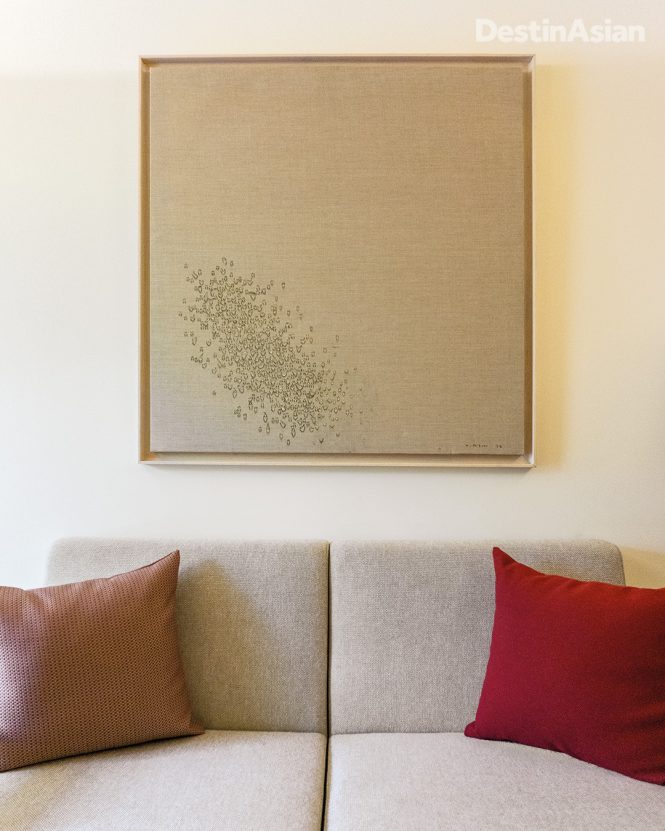 Guests are encouraged to socialize, and perhaps the best area for that is the Grand Room, a big half-moon space nestled in the building’s main curve. With a long, cardboard-legged dining table, Ban’s tube-and-plywood Carta chairs, and a paper-tube floor lamp that pays homage to a 1933 design by Frank Lloyd Wright, the room is fronted by a white-brick fireplace flanked on either side by retractable glass walls that open onto a garden-fringed deck, blurring the line between indoor and outdoor. Even the most reticent guest will find plenty of ice breakers: the seasonal colors of the foliage; the contours of the architecture; the thought-provoking furniture; and the art—Hoang has spent a small fortune on a collection of works from the Gutai group of Japanese postwar artists like Jiro Yoshihara, Toshimitsu Imai, and Yasuo Sumi as well as significant international names such as Kim Tschang-Yeul and Günther Förg.

What they won’t find, however, is a restaurant, or a spa. This is meant to encourage connections with the local community. A small kitchen off the Grand Room prepares continental breakfasts sourced from coffee roasters and bakeries in town, and can host visiting chefs on request. Otherwise, guests can order in from a list of partner establishments, or ask dapper general manager Kazuhiko “Kaz” Yamada to arrange a visit to one of Karuizawa’s many good restaurants; among them, Kutsukake Stay, an old boarding house whose dining room serves kaiseki-style dinners of Nagano fare like salt-grilled sweetfish, soba with walnut sauce, and okara (tofu pulp) topped with salmon roe. 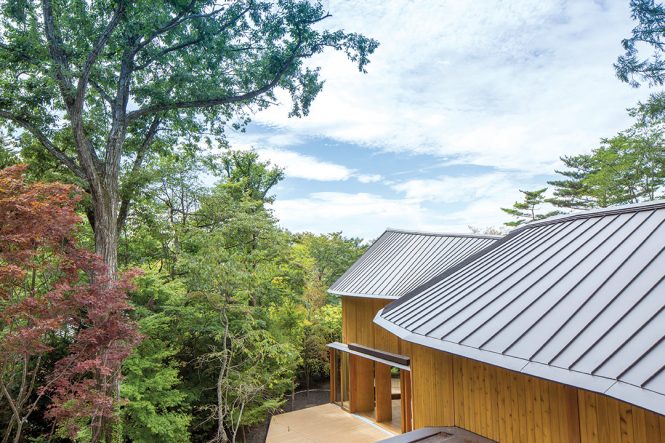 For those looking for a therapeutic soak, onsen abound in the area. Also near at hand is Harunire Terrace, a clutch of shops and eateries shaded by Japanese elms on the banks of the Yu River. Order a farm-made matcha gelato and settle in for some prime people-watching: the pup-friendly terrace attracts dog walkers aplenty, their perfectly groomed canines turned out for the occasion in Instagram-ready bandanas, pom-poms, and sweaters. 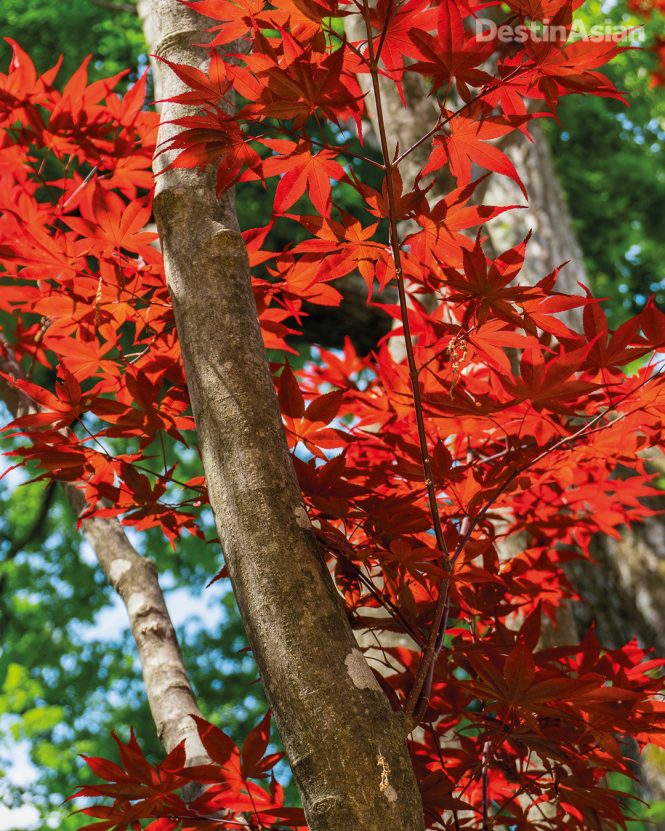 A maple tree adds a splash of color to the garden.

A different milieu awaits at the Sezon Museum of Modern Art, a 10-minute stroll from the hotel by way of an ancient Shinto shrine. Here, the collection includes Rothkos, Klees, Pollocks, and a who’s who of contemporary Japanese artists, with works spilling out into a bosky sculpture garden. Rather commune with nature? Walk to Senga Falls, a 20-meter cascade surrounded by evergreen parkland. Head there before breakfast, and you’ll likely have it all to yourself.
The same can’t be said for Shishi-Iwa House; now that the word is out, it’s a safe bet that its 10 rooms will be in high demand. But Hoang has an answer for that as well: he recently announced a 12-room sequel, Shishi-Iwa Annex, that Shigeru Ban is developing just down the road. Even when it comes to minimalism, it seems, you can’t have too much of a good thing.

These big-name properties have joined the ranks of the city’s top lodgings, each with its own dist...