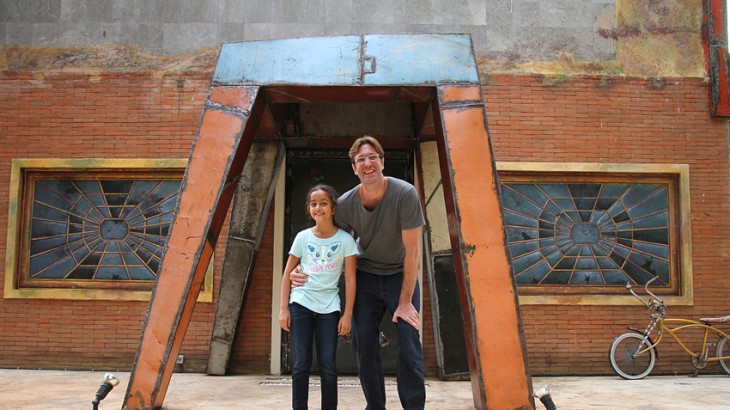 Chef Will Goldfarb in front of his Ubud dessert restaurant with his daughter Loulou.

For those who believe you must suffer for your art, Will Goldfarb can tell you it’s true. After his cultish Manhattan restaurant Room 4 Dessert folded in 2007, Goldfarb discovered a malignant tumor in his leg. He later ruptured four discs in his back while opening restaurant-cum-laboratory Mejekawi at Ku De Ta in Bali in 2013. Now back in fighting shape, Goldfarb has re-launched Room 4 Dessert (Jl. Sanginggan Raya; 62-361/553-2598) in the heart of Ubud. The effect of six years in Bali is palpable in his food: local ingredients like rambutan, passion fruit, and chia seeds add delicate textures to his Passion You black-rice pudding, while the Sugar Refinery 2.0, pictured above, combines  palm sugar, mangosteen bitters, and Balinese meringue. Goldfarb also curates an ambitious wine list and cheeky cocktails like the Sere Lady, a foamy gin sidecar with muddled lemongrass. The exterior features a mad-scientist-esque scrap-steel awning and original commissions by painter Gusti Ngurah Wijana throughout. Gone, however, is his signature lab equipment in favor of more intimacy with the ingredients—the venue has the same appliances left from the last café. Expect frequent unsolicited (but welcome) visits from Goldfarb at your table. —Rachel Will