The park will honor Oscar-winning animator Hayao Miyazaki’s best works, bringing them to life through rides and trails. By 2020, loyal fans of Studio Ghibli will finally have a theme park to call their own.

The animation studio from Japan, renowned internationally for films including Spirited Away, Princess Mononoke, and Howls’ Moving Castle, will be opening a theme park near Nagoya in the country’s Aichi region. Parkgoers can expect to see the whimsical world of Oscar-winning animator Hayao Miyazaki come to life through rides and forest trails based off the studio’s fantasy films.

As co-founder of the animation studio, Miyazaki is one of the most successful animators of his time, attaining international acclaim as a masterful storyteller. The park will honor some of his best works, many of which have won awards. One of them, ‘Spirited Away’, won the Oscar for best animated film in 2003 and is the first Japanese film to receive such an accolade.

So far, only a basic plan has been released, revealing that the park will be designed with the iconic, European-style brick towers that often appear in his works, as well as statues of boars, spiders, and other creatures. Nature lovers will also be delighted to find plenty of forest trails and nature spots within the park. According to the local government, the park will be situated at the Expo 2005 Aichi Commemorative Park in Nagakute city.

As of 2001, Studio Ghibli has already been operating a museum on the outskirts of Tokyo, a multi-use space featuring a café, garden, and bookshop. 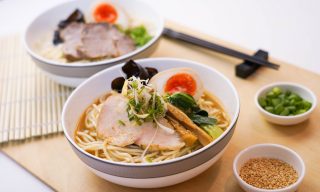 First-class and business passengers will soon be able to enjoy delicious ramen onboard selected Japa...