On the dune-filled shoreline of Mozambique’s Benguerra Island, a mold-breaking resort is pushing the boundaries of sustainable design, environmental conservation, and community involvement. 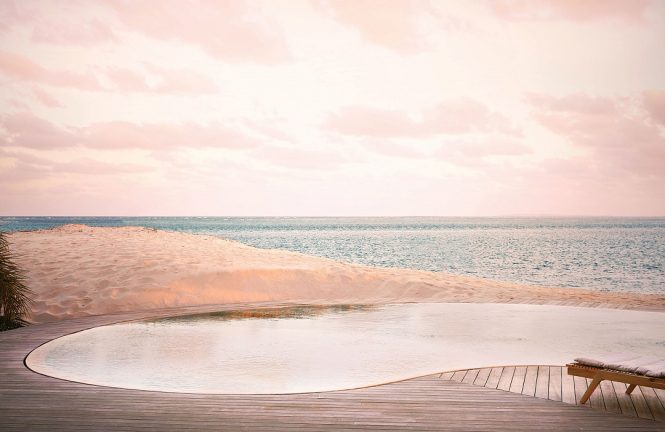 It seems like a happy coincidence that the best time to visit Mozambique’s unexplored white-sand beaches is also peak safari season in Africa. Yet beach escapes matching the sharp edge of safari travel — those immersive, eco-luxe hideaways funding conservation across Africa — were few and far between before the recent opening of Kisawa Sanctuary. With just 12 bungalow “residences” set on the southern shores of Benguerra Island, the 300-hectare resort defines the ultimate luxury as not having to share your immersive experience in a wildly beautiful place with more than a handful of other guests. A property as visionary as this would have raised the stakes anywhere in the Indian Ocean — even the Maldives — so I’m curious why Nina Flohr, Kisawa’s founder and creative director, chose a destination as far from the fray as this drop in the ocean off the Mozambican coast.

Flohr says it felt like the right place for a resort of this kind, not only allowing guests to explore the marine life but also to help protect and conserve the island and surrounding ocean in a very direct way. She wanted the architecture to be guided by what she saw — the waves, the wind whispering through the trees, the shifting dunes. Above all, she was on a sustainable-design mission, which meant honoring the people and vernacular traditions of Mozambique but also innovating through the likes of 3D-printing technology to make building materials from what was readily available: sand and seawater.

The first time Flohr stood on these dunes a decade ago she reveled in the silence and peace, envisioning “buildings that would serve as a celebration of the culture and unite the old with the new. Nature guided us every step of the way and remains our daily source of inspiration.” She spent many nights on-site, camping under the stars, to understand the prevailing weather, the impact of the tides, and the interplay between shade and sun. Drawing on her innate knowledge of luxury, the Swiss entrepreneur and former creative director of VistaJet wanted to create the island escape of her dreams, firmly rooted in Africa. The name she chose means “unbreakable” in one of the locally spoken island dialects, to respectfully honor the bond between people and place by embracing local craft and traditions, like weaving and thatching. 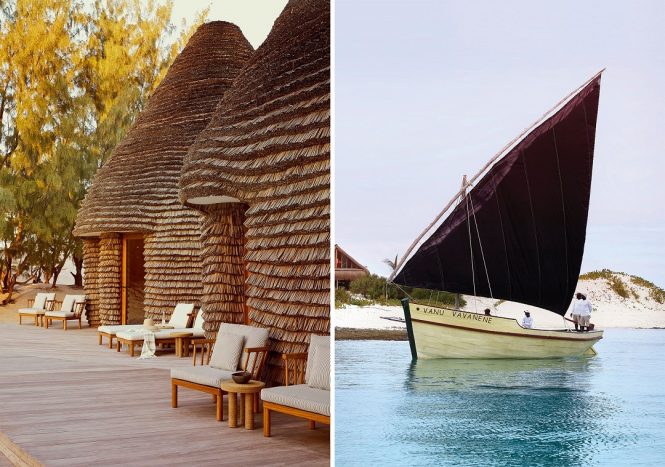 Left to right: Domed treatment rooms at the spa; the resort’s dhow. 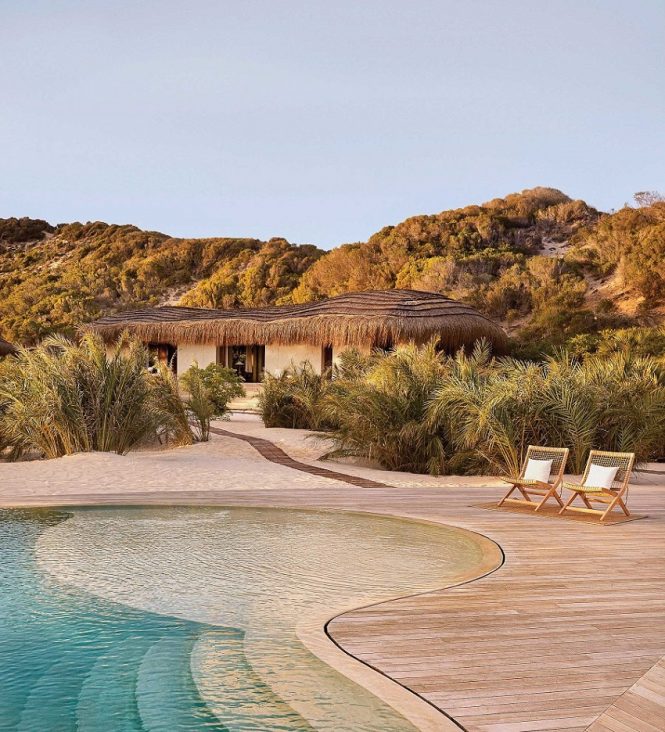 One of Kisawa Sanctuary’s thatch-roofed residences.

Skimming across the turquoise expanse of the Mozambique Channel toward Benguerra — a 30-minute trip from the coastal town of Vilankulo in one of Kisawa’s Italian speedboats — it takes a while before the sinuous shapes of the nearest residences become visible, so effectively do they blend into the dunes. Up close, the bungalows are statuesque in scale with their signature zigzag thatched roofs (inspired by island vernacular) and dramatic geometric facades. The spacious, open-plan interior design has been used as an effective tool to conjure a sense of freedom and encourage a deep surrendering to nature. The ocean is always visible. Indoors easily feels outdoors, thanks to enormous glass doors that slide away on both sides of the living room, bedroom, and bathroom. Birdsong drifts in on the breeze. The vast interior can just as easily be divided up and made more private by sliding together a series of tall timber pocket doors with woven palm frond insets. Self-contained, each residence is designed for two, although the larger ones have individual bungalows clustered together for families or a group of friends wanting to hang out together at the private infinity pool and day area, set in one-acre gardens with access to an exclusive stretch of beach.

Palatial, perhaps, but Flohr describes the resort’s light footprint as “conscious construction.” The inclusion of decorative weaving and thatching techniques is complemented by modern technology like concrete-free foundations and surface cladding to reduce cement use by up to 60 percent. The almost nine kilometers of roads snaking through the property were paved using recycled materials. For zipping along these twisty tracks, each residence comes with a tropical-colored electric Mini Moke for spontaneous, independent exploration.

And there is much to explore, especially if you’re hungry for a taste of local cuisine, from Baracca beach bar, where there’s neon behind the counter and potent spiced cocktails to go with grilled prawns, to Mussassa, a riff on ’70s Mozambique via the Caribbean serving sashimi, ceviche, and kaleidoscopic salads. Throughout the property, including the Main Terrace restaurant with its open-fire robata grill, menus are dominated by organic fruits and vegetables grown in extensive permaculture gardens located behind the staff village. In conversation with the chefs, I learn that almost everything is made on-site, including artisanal cheeses, flavored butters, yogurt, charcuterie, and smoked fish. I can’t get enough of the mango and masala jams or the vanilla seed–flecked butter, so good slathered on a warm brioche bun at a poolside breakfast. What’s not made in their kitchens is sourced from a network of regional fishermen, farmers, and suppliers. 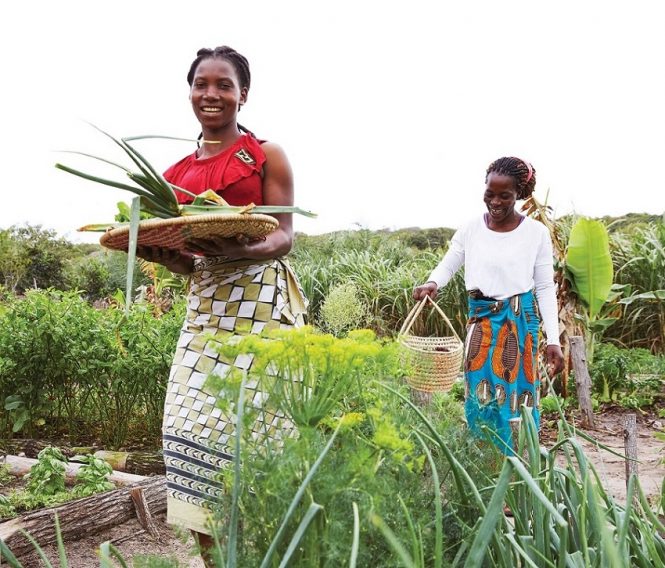 Left to right: Interiors showcase the work of island weavers and other artisans; a bungalow bedroom.

Locally sourced African ingredients, like coconut oil and wild honey, all packed with nourishing, skin-reviving properties, are used in the wellness center too. Along with a gym, reformer Pilates studio, and a huge free-form pool with striped cabanas for shaded ocean gazing, the spa offers massages and other treatments based on authentic Ayurvedic and traditional Chinese medicine. One evening, after an excursion on Kisawa’s yellow-hulled sailing dhow, I forego sundowner drinks on the beach for a private yoga practice with Karma, the Bhutanese therapist who runs the spa.

Perched high on the dunes overlooking the ebb and flow of the lagoon with low-lying Magaruque Island in the distance, my bungalow receives beautiful evening light that is echoed in the burnt oranges and ocher yellows of the sofa, leather armchairs, daybed, and hand-knotted rugs. Each residence has a unique color palette, rooted in earth tones but also inspired by tropical modernism and the architectural boom Mozambique experienced in the 1960s while still under Portuguese colonial rule. Flohr, who worked closely on every aspect of the project with her design studio, says: “We wanted to weave optimism, color and self-expression into the design.” In her quest to find Kisawa’s color palette, she came across Bauhaus artist Josef Albers’ color chart and played with combinations over many weeks before choosing a selection of tones and hues that she felt was representative of the mood of the destination against this bewitching backdrop of natural beauty.

African antiques and art were sourced throughout the continent, including Nigerian clay pots and woven 1950s plantation chairs from Cameroon. The overall result is an elegant mix of organic and modern. Natural textures contrast with sleek surfaces like brass bedside lamps and marble tables. Simple ink portraits by British artist Frances Costelloe, depicting some of the staff, are a thoughtful acknowledgment of the power and importance of community. Everything, including the exact placement of the daybed to appreciate the changing light and view throughout the day, feels very considered and thoughtful — like a distillation of Flohr’s most memorable stays in hotel suites and safari tents across Africa and beyond. 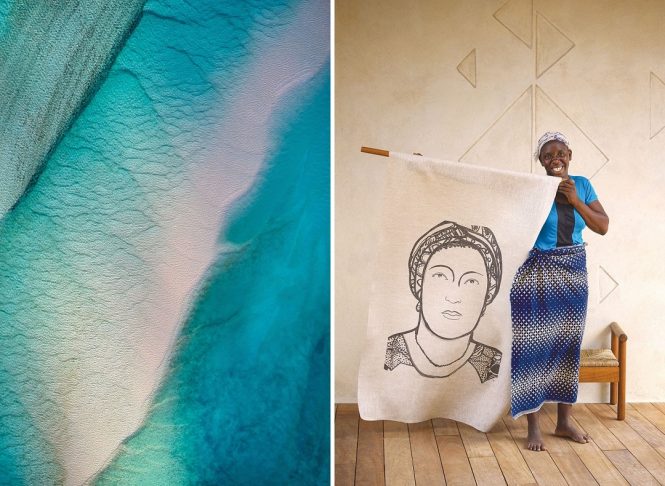 Left to right: A bird’s-eye view of the Bazaruto Archipelago’s crystal waters and shallow sandbars; a member of the resort’s construction team holding a staff portrait by artist Frances Costelloe. 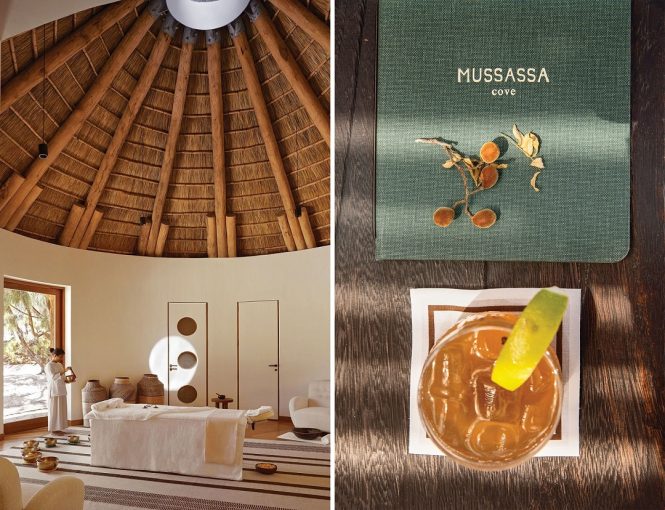 Left to right: Inside a treatment room at the spa; the house cocktail at Mussassa combines vodka and soda with local wild fruit.

Benguerra is one of five small barrier islands that make up the Bazaruto Archipelago. Beyond the Kisawa’s sprawling limits, there’s just a string of barefoot-chic lodges on its sheltered northwest coast and, inland, a few local villages from where many of the staff working in hospitality or conservation in the archipelago were born and still live.

If generations of scuba divers had their way, it would still be a closely guarded secret for it offers some of the most diverse and pristine corals and fish life in this part of the Indian Ocean. Situated some 14 kilometers off the mainland, the archipelago falls within a 1,425-square-kilometer marine protected area that was established 50 years ago. Endangered dugongs, five sea turtle species, and numerous sharks and rays find sanctuary here, while an ancient migratory route for whales and whale sharks is also safeguarded.

Before work on Kisawa Sanctuary had even begun, Flohr opened the Bazaruto Center for Scientific Studies (BCSS) in the north of the island, making clear her philanthropic intentions and her commitment to conserving the environment. As the first permanent ocean observatory in Africa, the center is monitoring ecosystems and studying the impact of climate change in the region.

The parallel operations of Kisawa and the BCSS allow for a symbiotic business model whereby hospitality contributes directly to nonprofit marine science, replicating a low-impact, high-value sustainable tourism model that is used extensively across Africa but less so along the coast. Flohr calls it “from resort to research,” adding that the Kisawa team looks at the data and knowledge output from BCSS and bases many important daily environmental decisions on this information, including meaningful guest experiences, like shark and marlin tagging or exploring the ocean with divers. Guests can also sponsor a student or one of the research projects, or help fund the 3D-printing technology being used to help restore coral reefs.

All told, Kisawa looks set to draw equally philanthropically minded travelers — people who share Flohr’s commitment to save the ocean and are willing to pay a premium not only for the luxury of privacy and space, but for the privilege of becoming part of something far greater than themselves.

kisawasanctuary.com; doubles from US$5,300 for a minimum three-night stay, all-inclusive. 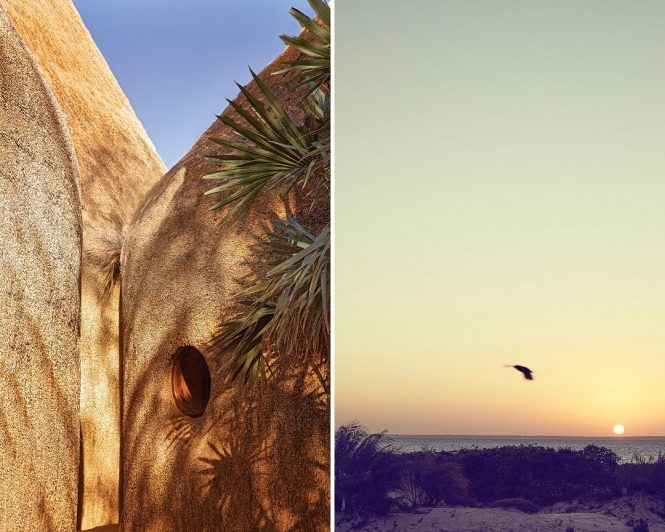 This article originally appeared in the June/August 2022 print issue of DestinAsian magazine (“Ahead of the Curve”). 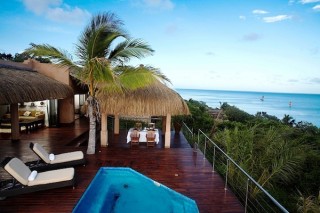