Los Angeles–based Australian singer-songwriter George Maple is making her mark on the global music scene with an experimental approach to pop. Ahead of releasing her sophomore album, she shares some inside tips on L.A. along with a few travel tales. What are your favorite live music venues in L.A.?
The Wiltern—the interiors are so ornate and over the top. I’ve played there a couple of times, and you get this great energy from the audience. There’s also The Theater at Ace Hotel and a cool little bar called The Echo.

Where would you recommend for art?
Definitely MOCA [The Museum of Contemporary Art, Los Angeles]. You can go back time and again, and you’ll always find something different. My friends and I like to visit with our headphones on, immersing ourselves in the artworks.

A big part of my upcoming album cycle will be to use this kind of space for shows—I’m interested in changing the voyeuristic structure of performances and having more interaction with the audience.

Name a great little restaurant you know.
Gracias Madre is a great vegan Mexican place in West Hollywood. Be sure to order the coconut ceviche!

What do you never travel without?
My running shoes and gym clothes as I try to work out every day. Also, my skincare kit—I’m still trying to get used to the changing seasons.

What has travel has taught you?
Three years ago, when I first started traveling, I was very forgetful, so I had to learn to be more organized. I realized airports are some of the most stressful and frustrating places of all, so I started using that as my practicing ground. Someone’s annoyed, something’s going wrong; traveling taught me to manage situations better in life.

And the best meal you’ve ever had while on vacation?
I stayed at this incredible B&B in Positano, Italy, with my boyfriend at that time, and we’d be served fresh cheeses and tomatoes every day. Fresh tomatoes in Italy don’t taste like anything else in the world.

Your most treasured souvenir is …
A heart-shaped rose quartz from Byron Bay, reminding me to align my heart and my head. I’m literally carrying a rock in my bag.

Which places are on your travel wish list?
South America, because I haven’t spent enough time there, and anywhere in Asia with a tropical island.

This article originally appeared in the April/May 2019 print issue of DestinAsian magazine (“On The Beat”). 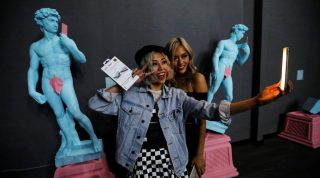 The newly opened museum celebrates the art of self-portraits with fun and quirky exhibits dedicated ...