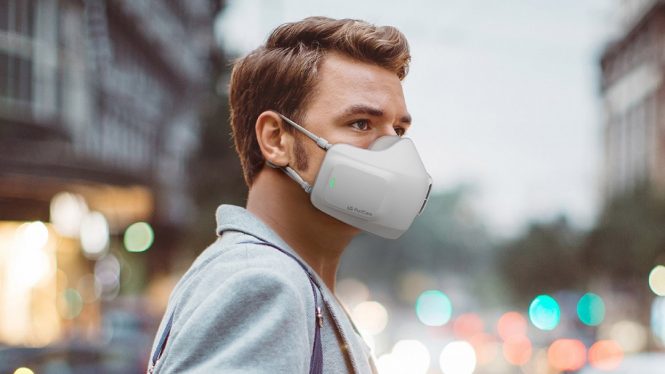 Looking for a high-tech alternative to your cloth-based facial covering? LG has unveiled the PuriCare Wearable Air Purifier, a battery-powered face mask designed to fit snugly over the nose and lower face that will filter out pollution and even germs. The multibillion-dollar Korean company will be showcasing its newest product at the IFA trade show being held in Berlin later this week (September 3–5).

The smart mask features two H13 HEPA filters—similar to those used in the company’s home appliances—that are removable and replaceable. Should they need to be replaced, a notification will be sent to the wearer’s smartphone via the LG ThinQ Android and iOS mobile app. The PuriCare Wearable is also equipped with two fans that can run at three different speeds; data from a built-in respiratory sensor allows them to adjust the settings automatically to suit the wearer’s breathing patterns. For instance, the fans will speed up to increase air intake while the user breathes in and slow down when he or she exhales.

LG says its wearable air purifier is charged in a special case that ships with the device, and lasts up to eight hours on a “low” battery setting and two hours on “high.” Ultraviolet LED lights incorporated into the case have the ability to “kill harmful germs” so the mask is fully sanitized before its next use.

In a press statement, Dan Song, president of LG Electronics Home Appliance & Air Solution Company, said, “The PuriCare Wearable Air Purifier is an exciting addition to our growing lineup of products designed to deliver meaningful health and hygiene benefits. At a time when consumers are seeking ways to make life safer and more convenient, it’s important that we’re able to offer solutions that add measurable value.”

LG considers the device an “environmental responsible solution” as every component of the PuriCare Wearable is replaceable and fully recyclable. The company has not yet commented on whether the smart mask can slow the transmission of Covid-19, but further tests are being carried out before its release in the fourth quarter of this year. No information on pricing or a specific launch date has yet been revealed.