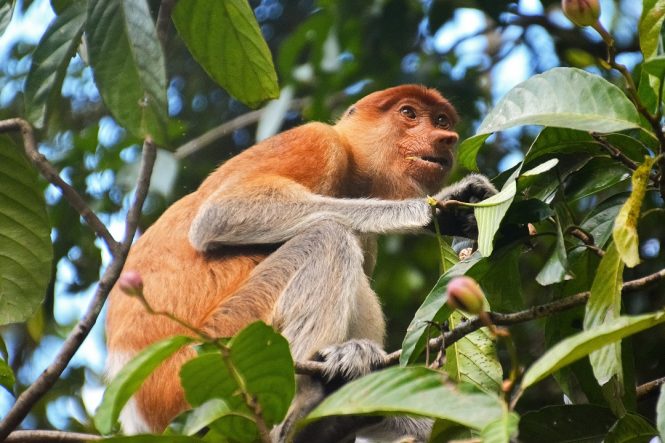 A proboscis monkey in the trees by the Kinabatangan River. (Photo: Jeremy Bezanger/Unsplash)

Malaysia Airlines has teamed up with the Sandakan Tourism Association to launch a limited-time offer to boost tourist arrivals to Sandakan, the second largest city in Sabah. Singapore-based vacationers who book flights until August 19 for travel through March 2023 will enjoy discounts of up to 15 percent on tickets when flying to Sandakan via Kuala Lumpur, not to mention the comfort of a full-service carrier on both legs of the journey. Domestic holidaymakers bound for Sandakan will pay one-way fares of RM179.

The former capital of British North Borneo, Sandakan started out as a small trading town in the mid-19th century, but it’s now known among modern-day adventurers as the gateway to some of Sabah’s most sought-after wildlife experiences. These include the orangutan and sun bear rehabilitation centers in Sepilok — about a half-hour’s drive from the city center — and the must-do river cruise down the Kinabatangan River to spot pygmy elephants, native birds, and proboscis monkeys on its jungled banks.

Malaysia Airlines’ tour operating arm, MHholidays, is also offering stays starting from RM509 at selected hotels in Sandakan, with the special rates bookable until August 19. In addition, the first 20 customers who reserve stays of at least two nights in a Junior suite at the Sabah Hotel Sandakan will receive a Bornean Sun Bear Conservation Centre merchandise voucher worth RM100. MHholidays packages come with a baggage allowance of 35 kilograms, complimentary onboard meals, free seat selection, and Enrich points.