Forget what you think you know about Philippine food. Here, we visit four restaurants in the nation’s capital that are pushing the boundaries of the local cuisine well beyond the standard sisig and adobo.

Bardot was, by all accounts, particularly fond of the lumpia, while another regular, Simone de Beauvoir, couldn’t get enough of signature dishes like gambas à la Pampanga and crab pancit. The restaurant, Aux Iles Philippines, became an instant hit when it debuted in 1972 just off the Boulevard St.-Germain in Paris, giving many in the French capital their first taste of Filipino food. But this was no gimmick—two forks and a spoon in the Michelin Guide and a coveted Gault & Millau entry proved otherwise.

Opening Aux Iles, as the restaurant became known, was one achievement in the rich life of Nora Daza, the Julia Child of the Philippines. Back in 1958 she hosted one of the first TV food programs anywhere—Let’s Cook With Nora—while her trailblazing restaurant business also brought her to New York’s Fifth Avenue with the opening of Maharlika, the city’s first fine-dining Philippine eatery. She passed away in 2013 at the age of 84, but not before having defined, shaped, and invigorated a cuisine so often overlooked beyond her country’s shores.

It’s hardly surprising, then, that Daza’s name is mentioned with great fondness by Rob Pengson, a 36-year-old Manila chef whose remarkably inventive Philippine cuisine I had the good fortune to try before his restaurant, The Goose Station, closed in February. Pengson recalled that he once phoned Daza to discuss his approach to cooking, something he describes as “true to traditional ingredients and techniques and Filipino in soul,” even if the presentation was wholly modern. What she might have thought about fusing a cultural narrative into a seven-course degustation menu named for a national hero I’ll never know, but for years, Pengson’s Rizal Menu—which featured things like squab inasal with beetroot gastrique and charred eggplant puree—was one of the Philippine capital’s most talked-about culinary experiences. It’s a shame to see it go.

Fortunately, you don’t have to look far to find other chefs who are taking the country’s cuisine in new and exciting directions. This is particularly true in The Fort, a.k.a Bonifacio Global City, a onetime military camp turned financial district where the jeepneys are electric and Manila’s millennials and in-crowd come to kick back and party. Here, just a 10-minute cab ride from The Goose Station’s former premises, sits the eponymous restaurant of chef Fernando Aracama, a two-level space that provides an elegant but unshowy backdrop for Aracama’s regional Filipino cooking, notably the flavors of his home province of Negros Occidental in the Western Visayas. The menu has a Forage section where dishes feature ingredients such as fresh pickled river ferns and sigarilyas (winged beans) alongside more traditional favorites such as oxtail-and-peanut kare-kare stew or chicken inasal from his hometown of Bacolod. Nutritious moringa leaves (the tree is known as malunggay in the Philippines) also make an appearance; Aracama mixes them with spinach and mozzarella in a brilliant and sinful dip to be generously spooned over crostini.

Elsewhere, the chef fuses local produce with global classics, so spaghettini comes with home-cured sardines, capers, salted duck eggs, and kesong puti, a creamy white buffalo cheese. It’s comfort food of the highest order, the Philippines in a bowl, that perfect pitch of sharpness and sodium that proudly stands as one of the most popular dishes on the menu.

From the enticing and unfamiliar list of desserts, one stands above the rest: suman sa ibos, glutinous rice mixed with coconut milk and salt, then steamed with turmeric-infused water in young palm leaves. It’s sensational when served with latik, a coconut milk reduction made with muscovado and one of the country’s proudest products, the carabao mango. Decadent and sweet, it deserves to be as much of a global favorite as Thailand’s mango sticky rice.

As a former participant in the Bocuse d’Or Asia and with years of experience behind him, Aracama is well placed to comment on Manila’s evolving food scene. “It’s a far cry from when I started cooking back in the ’90s,” he says. “Our chefs are a little bit more courageous now, opening their own concepts based on the Filipino menu and spinning it off, something that adds much needed spots of ‘difference’ and helps the Filipino palate become more rounded. It’s a happy thing to see.” 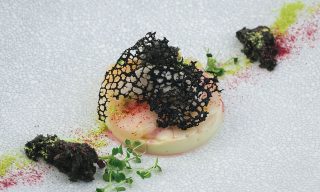