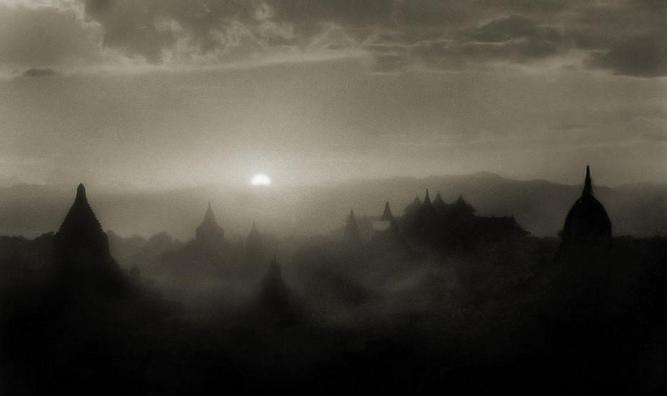 Above: Sunset over the ancient city of Bagan, Myanmar.

From Myanmar to Angkor, the temples of Kathmandu to the religious festivals of Bali, Spirit and Stone evokes a sense of ancient cultures rooted in tradition. McDermott first came to Angkor, Cambodia, in 1995 to witness a solar eclipse. Inspired by its ethereal light, he has spent more than two decades working in the region, as well as promoting local photographers in three galleries he founded.

His work can also be seen as part of the permanent collection at the National Museum in Phnom Penh, as well as in Time, Newsweek, the International Herald Tribune, and The New York Times.

“I am a pictorialist at heart,” McDermott says, “the photographic equivalent of an impressionist painter.”

McDermott’s biggest project to date has been a comprehensive portrait of the temples of Angkor, photographed between the dark days of war, beginning in 1975, and the influx of tourism that started in the mid-2000s.

The Angkor works have been published in a 2009 hardcover book Elegy: Reflections on Angkor, which has received critical acclaim from The New York Times Magazine among others.