Originally from Australia and now based in Hong Kong, Mohan first learned of the Kazakh nomads two decades ago, when a colleague showed him some pictures of the falconers. Those photos had been taken at a festival held in Mongolia’s Bayan-Ölgii province each summer, an event that has since emerged as the region’s main tourist attraction.

Mohan, however, developed more ambitious plans. “I didn’t just want to show up at a festival,” he says. “I wanted to really soak up a sense of these people’s lives, spend time in their homes, get close to them. They have been living the same way for hundreds of years.”

He also wanted to travel in the winter, during the hunting season. That is when the hunters’ favored prey, the corsac fox, with its distinctive reddish fur, stands out against the fresh snow. Mohan finally made the trip to Bayan-Ölgii last November, braving nighttime temperatures that plunged below minus 35 degrees Celsius.

“This was one of the hardest things I have ever done,” he recalls. Simply getting his camera equipment to function in the cold proved to be a constant challenge. “I slept with the batteries under my arms to try and keep them warm. When I was working, I had on so many layers of clothes, I could barely move. It was hard going.”

Connecting with the nomadic hunters was another hurdle. Most live in very remote settlements and move with the seasons. “Traveling in that part of the world takes forever,” Mohan says, chuckling at memories of bouncing around in old jeeps across trackless steppe. “And then when you get there, the people have already moved on!” 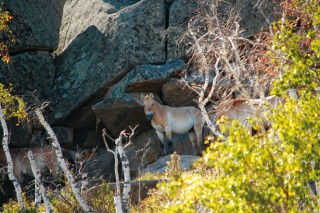 Once extinct in the wild, the takhi is making a comeback in the Mongolian steppe.