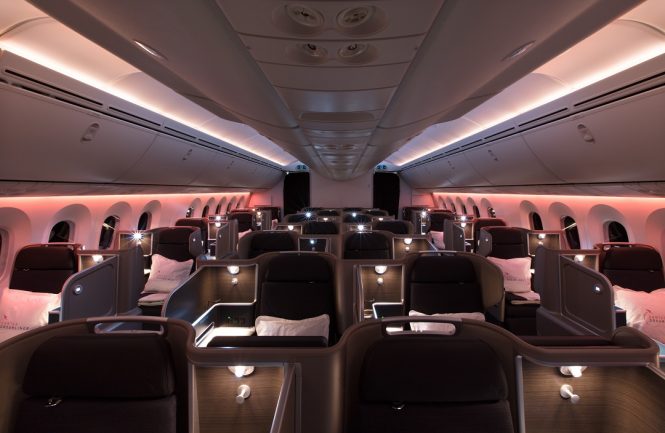 The business-class cabin on board a Qantas 787 Dreamliner. (Photo: Qantas)

Aligning with the completion of Australia’s Covid-19 vaccine rollout, flag carrier Qantas and its low-cost arm Jetstar have revised the date for the relaunch of international services to October 31, 2021. Capacity will be lower than that seen before the spread of coronavirus ground global air travel to a virtual halt; Qantas Group executives are predicting that international capacity will not recover until 2024.

The plan is to resume flights to 22 of Qantas’s 25 pre-pandemic destinations, including Hong Kong, Los Angeles, London, Singapore, and Johannesburg, from late October. Direct passenger services to New York, Osaka, and Santiago would not be restarted immediately, though the airline says it “remains committed” to flying to all three cities at a later time.

Jetstar, meanwhile, will resume flights on all 13 of its international routes, with frequencies adjusted in line with the projected recovery of international air travel. Holidaymakers can expect the budget airline to return to destinations such as Denpasar (Bali), Honolulu, Phuket, Singapore, and Tokyo Narita.

The Qantas Group’s two carriers are also gearing up for a significant increase in Trans-Tasman flights from July 1, and the company says it “has the ability to respond to travel bubbles that may open.” It’s hoped that the much-awaited quarantine-free arrangement between Australia and New Zealand will be launched by April, but progress has been slow in recent months.

International bookings made with Qantas until at least the end of April now come with even more flexibility, as change fees for travel dates have been waived, allowing flights to be rebooked up to 355 days before the trip. Both Qantas and Jetstar have also extended credit vouchers for travel on all international and domestic services through December 2023.