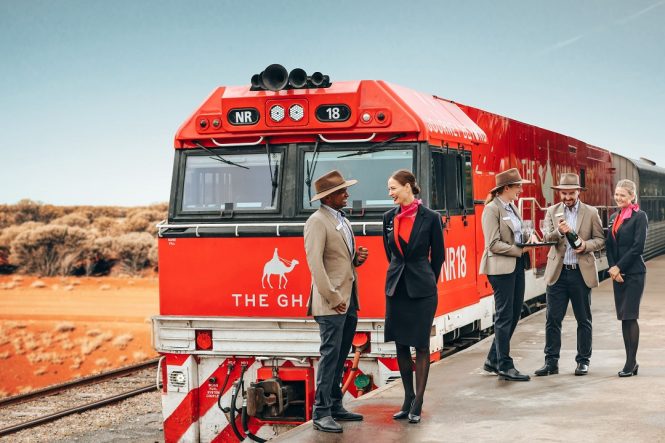 Qantas cabin crew and Journey Beyond staff members beside The Ghan. (Photo: Qantas)

With overseas travel practically off-limits to Australians for the foreseeable future, Qantas has teamed up with Journey Beyond Rail Expeditions to give its frequent flyers the chance to use their points on the latter’s all-inclusive premium rail holidays. Options include The Ghan, which crosses the Outback as it traverses the nearly 3,000 kilometers between Adelaide and Darwin, the Indian Pacific (running from Perth to Sydney), and the Great Southern for journeys between Adelaide and Brisbane. The Australian flag carrier says it’s the first time its Classic Reward seats have been offered on the ground, and spots on the overnight trains are already being sold as Classic Rail Reward seats.

Olivia Wirth, Qantas Loyalty CEO, said in a statement, “Ninety percent of our members want to use their points for travel so the ability to explore the country by rail is an exciting alternative for frequent flyers and a real drawcard for our program.” She added that the launch of Classic Rail Reward seats was the latest step in Qantas Loyalty’s evolution to meet the needs of the program’s 13 million members.

Bookings for rail travel in 2021 are already available. The Great Southern is extending its second season for another two weeks into February, while the once-a-week Ghan service is going twice weekly from May to August. Plans are afoot to resume the Indian Pacific’s weekly journeys from the middle of February.

Qantas Frequent Flyers can earn one Qantas Point for every A$1 spent on all Journey Beyond Rail Expeditions, or use their points to book twin and single Gold Cabins on The Ghan, Indian Pacific, and Great Southern starting from 100,000 Qantas Points.