Locked-down travelers can pretend they are conducting a video call mid-flight from the passenger cabin or cockpit of a Qantas plane. 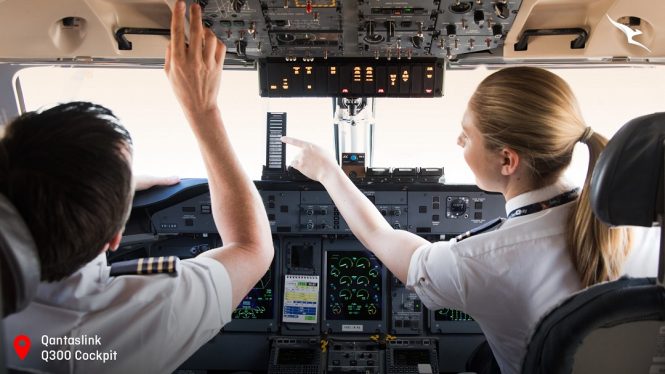 Australia’s flag carrier is encouraging grounded travelers who miss the experience of flying to “take off from home” with a series of aviation-themed backgrounds to introduce a Qantas touch to virtual meetings. Would-be travelers can download 10 full-size photos depicting a variety of settings, including a business-class seat aboard a Boeing 787 Dreamliner, the busy cockpit of a QantasLink Q300 aircraft (as seen from the jump seat), and the airlines’ domestic business-class lounges in Melbourne and Perth.

In a statement, Qantas Group Chief Customer Officer Stephanie Tully explained, “Our customers tell us they miss flying as much as getting to the destination itself and this sensory experience will help fill the temporary void while some of us can’t fly because of border closures.

“We have some of the most engaged Frequent Flyer members in the world and while we might not be able to take them around the world right now, we can remind them of what they have to look forward to when we welcome them back on board a Qantas flight in the future.”

In addition, Qantas’ signature soundtrack is now available for free on Spotify and Apple Music for the very first time following requests from frequent flyers. The airline’s soundtrack was created especially for Qantas by Australian composer Haydn Walker and guitarist Nathan Cavaleri, and is the boarding and inflight default music on all Qantas domestic and international flights. And for those daydreaming about traveling Down Under, the soundtrack will also feature on the Qantas YouTube channel, set to aerial footage of some of the most dramatic landscapes around Australia.