Its existing lounge precinct at Auckland Airport is getting a major upgrade ahead of the route’s debut. 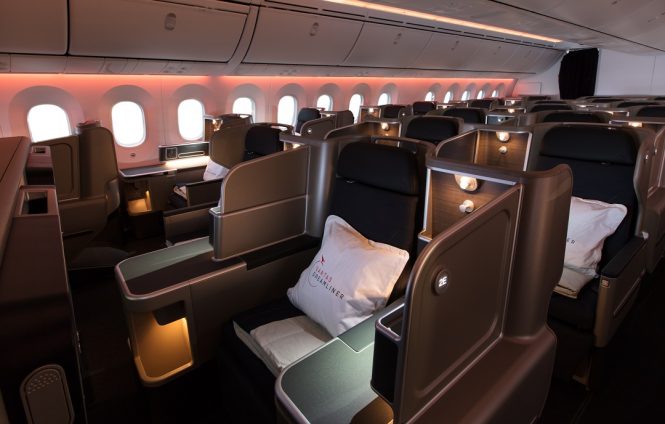 The business-class cabin aboard a Qantas Boeing 787 Dreamliner. (Photo: Qantas)

Australia’s flag carrier has unveiled plans to return to New York with a new service from Sydney via Auckland from June 14 next year, pending regulatory approval. The launch of Flights QF3 and QF4 will see the Flying Kangaroo touch down at JFK three days a week initially, ending a three-year hiatus caused by the Covid-19 pandemic. Flights will be operated by Qantas Boeing 787 Dreamliners, and three new aircraft are scheduled for delivery in 2023.

In a statement, Qantas Group CEO Alan Joyce said that flying via Auckland would provide better connectivity from more destinations in Australia, before an uninterrupted 16-hour flight to New York: “We can’t wait to return to New York and it’s made possible by the delivery of new aircraft, which have been caught up in delays that have impacted lots of airlines.” He added, “Customer feedback on our direct London and Rome services show how well suited our Dreamliner cabins are to longer international flights like these, which is helped by the fact we designed them with more room and fewer seats than most of our competitors.”

Tickets for the upcoming Sydney–Auckland–New York route are already on sale. Qantas currently operates six daily services to Auckland from Sydney, Brisbane, Melbourne, which will increase to 11 daily services when the new flight to New York launches. Two Points Planes are set to be flown in the first week, with all seats across every cabin available as a Classic Reward flight on QF3 and QF4 on June 16. Points Plane connections will also be available for Frequent Flyers based in Brisbane and Melbourne to use Classic Rewards for their trans-Tasman flights.

Meanwhile, the airline has committed to upgrading its lounge network, with a multimillion-dollar investment to build a brand-new space in Auckland in addition to domestic lounges in Adelaide, Port Hedland, and Rockhampton. In New Zealand’s main international gateway, the carrier will completely redesign and expand its existing lounge precinct — plans for which were stalled by the pandemic — to provide an up-to-date pre-flight experience for customers traveling to and from Australia as well as on the new Auckland–New York service.

The existing two lounge spaces will be combined and redeveloped into a single Qantas International Lounge and include an expansion into an adjacent space to increase capacity by around 40 percent from 244 seats to 340. Qantas says the detailed design process will begin shortly, and building work will be staged to allow the lounge to operate during the redevelopment. The revamped space will offer a number of features specifically tailored for long-haul travel, based on positive feedback from other parts of the Qantas network.