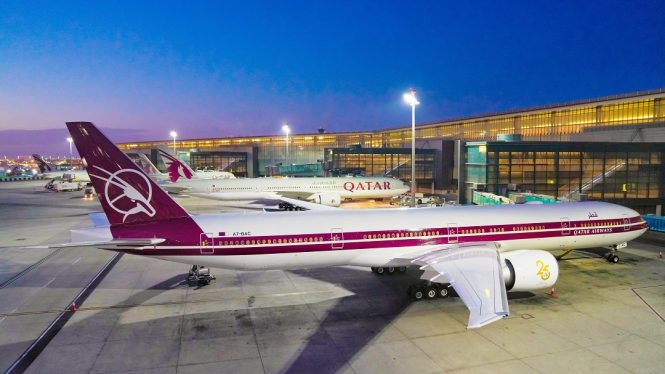 All photos courtesy of Qatar Airways

Qatar’s flag carrier has painted one of its Boeing 777-300 aircraft with a special livery as part of its silver anniversary celebrations ahead of the upcoming FIFA World Cup, which will be held in the country toward the end of this year. Making its debut as Flight QR 41 from Doha to Paris’s Charles de Gaulle Airport, the wide-body jet will become a familiar sight on a variety of other Qatar Airways routes over the coming 12 months. The chosen look is a throwback to the airline’s earliest livery, with double bands of burgundy running along the fuselage and a stylized Arabian oryx on the tail. Aside from the French capital, the 777 in question has already been sighted in destinations as diverse as Cape Town, Male in the Maldives, Manchester, and Sydney.

Qatar Airways Group Chief Executive Akbar Al Baker said in a statement, “We are tremendously excited to celebrate our 25th anniversary by introducing this unique aircraft to our fleet. We hope this retro design will bring many memories of travel to our passengers, especially those who experienced traveling with us in our early years.”

While operations technically began in January 1994, Qatar Airways was eventually relaunched in 1997, the same year it began services between Doha and London. The new retro livery highlights its dramatic transformation over the past two and a half decades from a small regional carrier into an industry-leading global airline. Qatar Airways has been steadily rebuilding its global network since the onset of the Covid-19 pandemic, and currently flies to more than 140 destinations across six continents. 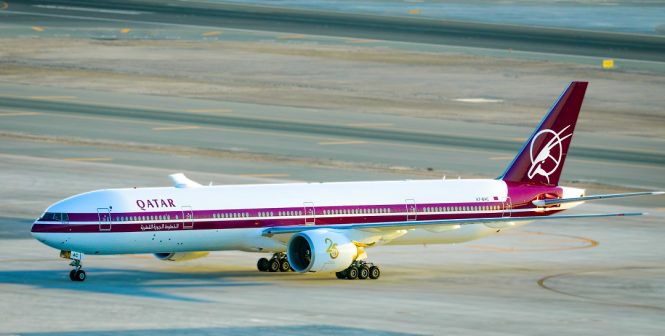