It’s been little more than two years since TBLS shut its doors, but private-kitchen junkies are still lamenting the loss of their favorite Hong Kong haven. TBLS was the brainchild of Vietnam-born, New York–raised chef Que Vinh Dang, and its 18 seats were some of the most sought after in the city. Perhaps the popularity took its toll on Dang, or perhaps he wanted to focus on his growing family, but in October 2013, he closed the restaurant and opened a laid-back microbrewery, Tipping Point Brewing Co., instead. But as of December, the maestro of the set menu is back with a new venture: Quest.

Set 28 stories above Hennessy Road in Wan Chai, the 30-seat dining room is chic and spacious, with floor-to-ceiling windows, plenty of black lacquer and chrome, and an open kitchen where Dang holds court, putting finishing touches on dishes made with both food and theatrics. Although the chef is quick to point out that Quest is not a TBLS reincarnation, the same daring, experimentation, and playfulness underpins his new eight- and 12-course set menus, which are Vietnamese in name but global in flavor—course three, for instance, is a glossy mound of beef tartare dusted with a pho reduction and shavings of foie gras. With new rules to be broken and new lessons learned, it’s clear that Dang is in his comfort zone.

His Vietnamese heritage is evident at first bite, which comes as yellowtail sashimi served with a zesty tomato jelly, a touch of nuoc nam sauce, and yuzukosho, a fermented Japanese paste of yuzu peel and chili that slices through the firm, fatty fish. Following that is his take on a traditional nem cuon, or spring roll, with silky Alaskan king crab and tangy pickled daikon under bright smoked-paprika foam that explodes on the palate, making for a roller coaster of a few mouthfuls. Black cod comes with sticky squid-ink mochi and a moreish ring of caramelized fish sauce, while grilled Berkshire pork belly nestled on a bed of purple sweet-potato puree makes for a great comfort dish.

Asian-fusion? Molecular East-meets-West? With Dang’s plans to tweak menus regularly and completely revamp them each season, don’t try to pigeon-hole his style. But if the fact that menus are given at the end of the meal rather than the beginning is meant to signify anything, it’s that Quest will always be, if nothing else, a showcase for surprises. Just like old times.

The Continental
With an elegant dining room and the city’s most extensive outdoor terraces, this Pacific Place beauty boasts a sophisticated wine list and a Franco-Anglaise menu by London chef Rowley Leigh (Pacific Place L4, 88 Queensway, Admiralty; 852/2704-5211; no website). 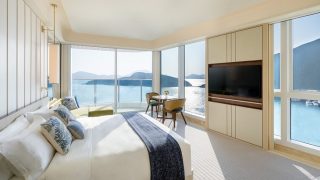