The wait is nearly over for the Pinault Collection’s hotly anticipated museum in the French capital. When museums finally reopen in Paris, art buffs can look forward to more than a refurbished Louvre, which has been undergoing renovations since lockdown measures closed its doors in October. Just a five-minute walk from the onetime royal palace is the new Bourse de Commerce – Pinault Collection, the latest project by French luxury-goods magnate François Pinault. A sister to Pinault’s two private museums in Venice, it inhabits the Bourse de Commerce, a circular 19th-century commodities exchange topped by an iron-and-glass dome.

The landmark building has been overhauled to the tune of US$170 million with a restoration led by Pritzker Prize–winning architect Tadao Ando, who has transformed it into a multiuse art venue with a 284-seat auditorium, a black-box theater, and 6,800 square meters of modular exhibition space. Taking center stage is a nine-meter-tall cylinder of concrete that Ando has inserted into the building’s rotunda to create a central gallery bathed in natural light from the dome above. Michel Bras, one of France’s most venerated chefs, will run the top-floor restaurant.

Originally meant for last summer, the museum’s opening has been postponed several times due to the coronavirus crisis, and is now scheduled to take place on May 22. While details of its programing will not be revealed until then, visitors can expect to be impressed: the Pinault Collection comprises some 10,000 works by 20th-and 21st-century artists such as Jeff Koons, Cindy Sherman, Cy Twombly, and Damien Hirst. 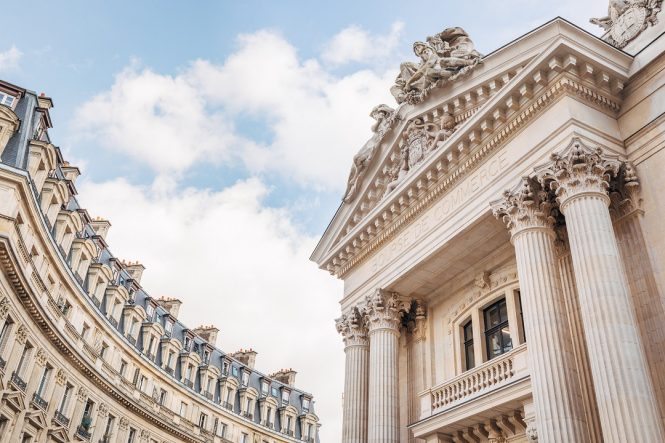 This article originally appeared in the March/May 2021 print issue of DestinAsian magazine (“A Fair Exchange”).