A century and a half after the birth of Matisse, a visit to the great artist’s homeland in northern France reveals where his love of color began. 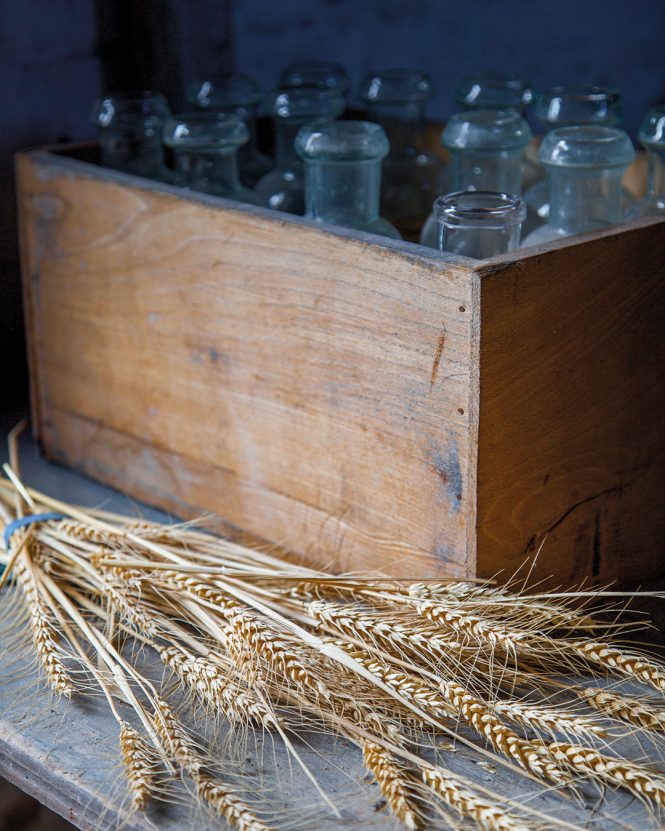 A display at La Maison familiale d’Henri Matisse, the Matisse family seed store and home (now a museum) in Bohain-en-Vermandois.

On the last day of 1869, Henri Matisse was born in his grandparents’ dirt-floored weaver’s cottage in the rural French town of Le Cateau-Cambrésis, not far from the Belgian border. The future Fauvist would spend the next 20 years of his life in the area, a largely flat, nearly treeless expanse of broad fields and small villages marked at the time by factory effluent and the smoking chimneys of beet-sugar refineries and textile mills. It is either an irony or an impetus that, from this drab landscape at the edge of the Flanders plain, Matisse emerged with his magnificent joy of colors.

The artist’s later life on the French Riviera is well documented. But the northeastern towns of his youth remain mostly unsung and largely unvisited. Last March, ahead of the 150th anniversary of Matisse’s birth, I went to France to explore the area that nurtured one of the greatest painters—and master colorists—of the 20th century. 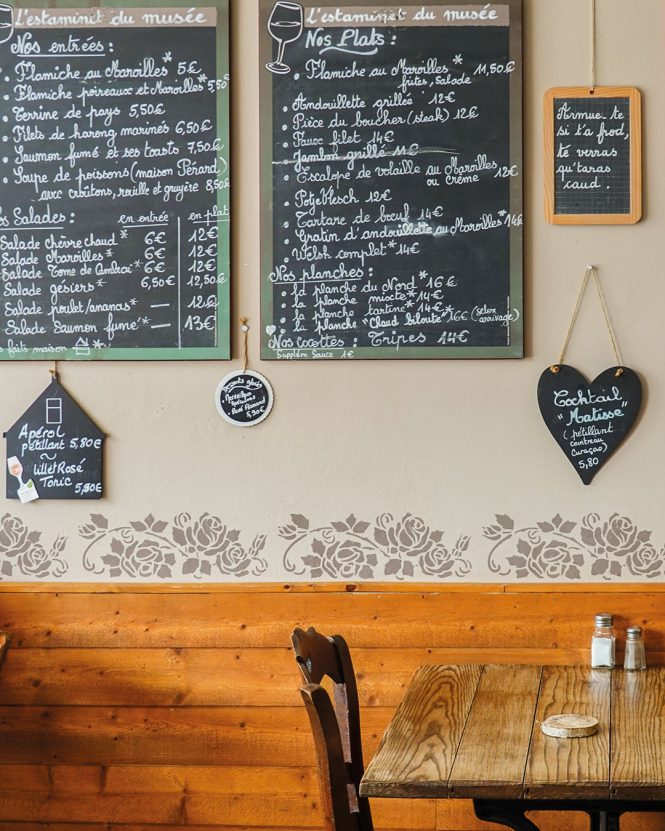 Facing the Musée Matisse in Le Cateau-Cambrésis, L’Estaminet du Musée makes a perfect spot for lunch … or a Matisse-themed cocktail.

I began, as he did, in Le Cateau, a two-hour drive from Paris under a drizzly gray sky. Finding that the house of his birth had been torn down a hundred years ago, I headed instead to the 17th-century Église Saint-Martin, the baroque Catholic church where Matisse was baptized and later confirmed. While I stood in the empty nave, the sun poked through the clouds, illuminating marvelous stained-glass windows and throwing patterned hues along the church’s pillars. It was the first of many such surprising turns of brilliant color that I would glimpse during my time in Matisse’s homeland.

My next stop was Bohain—officially Bohain-en-Vermandois, population 5,000—some 16 kilometers southwest of Le Cateau through lightly undulating fields that glowed green with young shoots. Matisse’s parents settled here when he was just eight days old, taking over a seed and grain store on Bohain’s main street. The building is now a small, well-kept museum called La Maison familiale d’Henri Matisse, which encompasses the original shop, the rooms above it where the family lived, and a granary. Among the numerous interesting personal items in the upstairs rooms—an easel, wooden birdcages, a pair of the artist’s glasses set on a table beside the bed he bought for his wedding—was a clue to Matisse’s obsession with colors: a cache of local fabric samples and bobbins wound with brilliant thread. 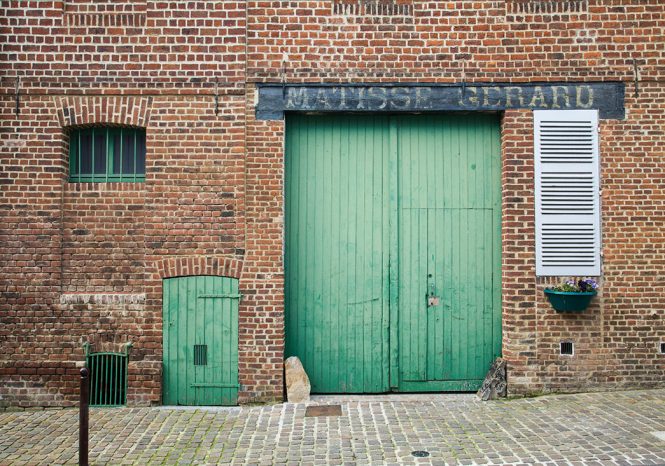 Bohain had been an important textile center since medieval times, its weavers famous for their silks, velvets, cashmeres, and tweeds; their dazzling gauzes and tulles. When Matisse was a child, Bohain had few if any rivals in France for the quality or rich colors of its fabrics. In a town without galleries or museums, few public sculptures, and hardly a mural, the lustrous textiles produced in its workshops must have provided the young Matisse with a visual outlet for his imagination.

Developing an early fascination with fabric, he began amassing a collection of scraps and swatches as an art student and continued to add to it throughout his life, buying tapestries, cotton prints, Islamic embroidery, and exotic gowns on his travels. This “working library” fed Matisse’s fascination with colors and patterns, and appeared in his art as table covers for still lifes, throws for sofas, and, most conspicuously, backgrounds to his reclining odalisques of the 1920s.

From the museum, I set out with an audio guide on a walking tour of Matisse-related attractions. Strolling though quiet streets and past houses with pale blue shutters, I visited his uncle’s former residence and the cemetery where his parents are buried. While tourists are rare in Bohain, I was surprised to be greeted by every person I passed on the hour-long loop. 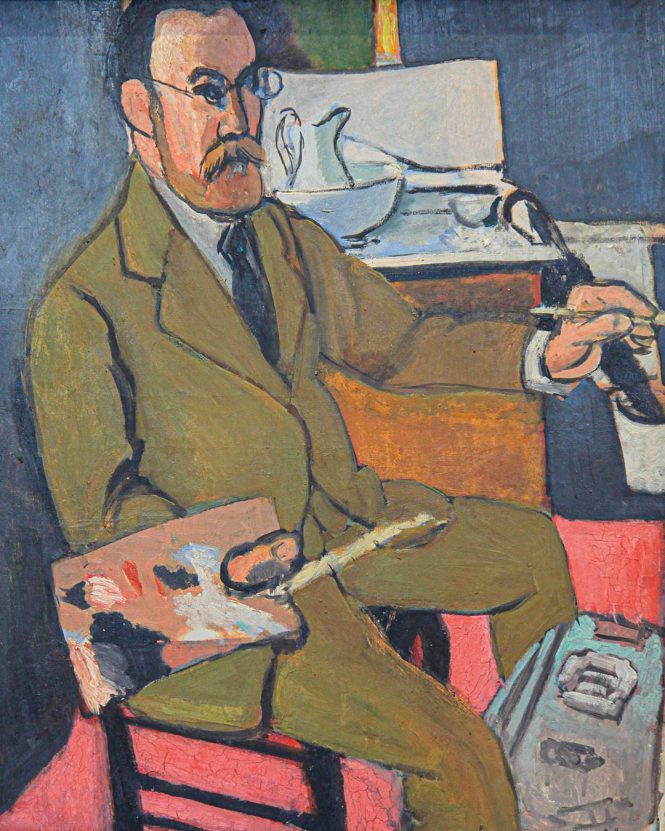 Painted by Matisse in 1918 soon after his arrival in Nice, this self-portrait is among the wide-ranging collection at the Musée Matisse Le Cateau- Cambrésis.

In 1882, the 12-year-old Matisse was sent to school in Saint-Quentin, two dozen kilometers farther south and (then as now) by far the largest population center in the Aisne département. Developed around the tomb of a martyred third-century Roman Christian named Quentin, the city is home to a grand Gothic basilica that was built in stages between the 12th and 15th centuries. With flamboyant flying buttresses, a nave that stretches 120 meters, and rows of high windows under its soaring, vaulted ceilings, it is the region’s most impressive structure—and visible for miles.

A six-minute walk brought me to the Lycée Henri Martin, the large state boarding school where Matisse spent five years. When I passed by its gates during a break between classes, the courtyard was abuzz with students. Would Matisse have enjoyed such company, I wondered? Likely not. He was a shy child, and sickly, a condition no doubt exacerbated by sleeping in unheated dormitories.

After graduating in 1887, Matisse was sent to Paris for a year to study to become a lawyer’s copying clerk. He returned to Saint-Quentin to work in a law office. Up to that point, Matisse had shown little interest in art. But that changed when a bout of appendicitis put him in the hospital. During a lengthy convalescence at his parents’ home above the seed store in Bohain, his mother bought him a paint set. “From the moment I held that box of colors in my hands, I knew this was my life,” he later said. “Since then, I’ve hardly given a thought to anything else, just painting.” 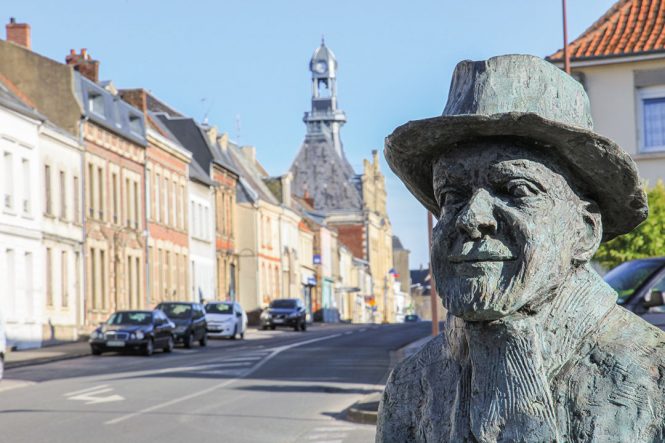 A bust of the artist in Bohain.

Once he had recovered, Matisse returned to work in Saint-Quentin. He also enrolled without his father’s knowledge in drawing classes at the École de dessin Maurice-Quentin de La Tour, which was installed in the attic of a crumbling former abbey. (The building was shortly replaced by the stately Palais de Fervaques, now a courthouse.)

Matisse attended classes before work—it was a mere minute’s walk to his office—and afterward would hurry home to his rented lodgings to paint in the remaining light. Live models and even painting from nature were prohibited at the conservative school; students worked only from classical busts and decorative motifs. When one of the young teachers, Émmanuel Croizé, set up a rival academy on the edge of town to offer those forbidden modern elements, Matisse enrolled there too. Painting consumed him. He was 20 years old and making up for lost time.

Within a year, he had quit his job, and in October 1891 moved to Paris to become an artist. The family was scandalized. His father supposedly yelled at his departing son that it was “a career for down-and-outs,” and that he would “die from hunger.” 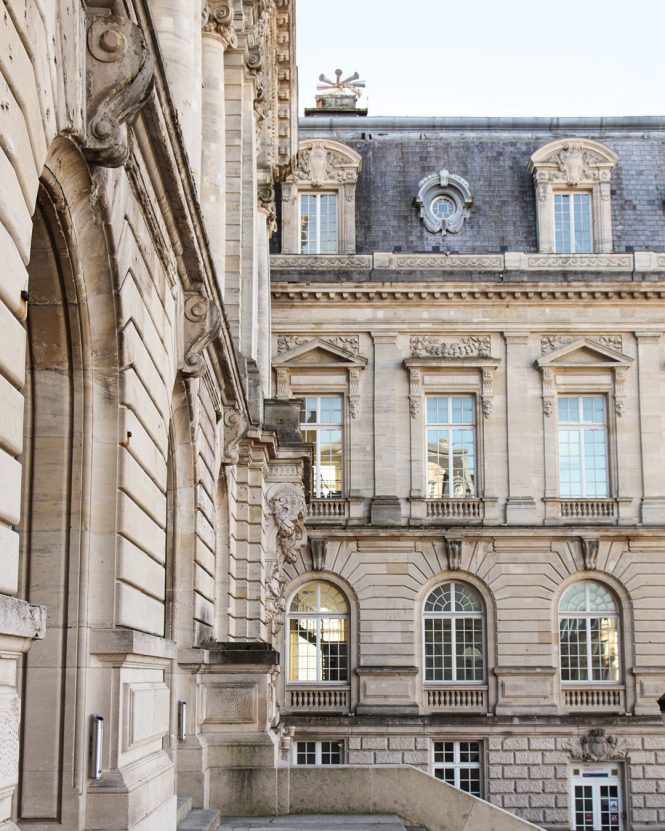 Saint-Quentin’s Palais de Fervaques, built on the site of the abbey where Matisse attended his first art classes.

While the young Matisse didn’t perish, it took him decades to find financial stability. In the winter of 1902, deeply impoverished and unable to sell his work, he returned to Bohain and stayed there until the end of 1903. By then his palette had grown more vivid and his colors were on the point of breaking free. He burst onto the art scene in 1905 as a leader of the avant-garde Fauvist movement, with canvases characterized by pure colors and untamed brushwork. Until the end of his long life, color marked Matisse’s art.

In the summer of 1951, the 81-year-old Matisse received a group of dignitaries from the village of his birth to discuss their desire to set up a museum dedicated to the artist in Le Cateau-Cambrésis. Matisse agreed, and offered over 80 pieces from his personal collection. The following year, the Musée Matisse was inaugurated in Le Cateau’s town hall. It was the only such museum to open during Matisse’s lifetime. (He died in 1954.)

In 1982, the Musée Matisse moved into the 18th-century Palais Fénelon, the former residence of the archbishops of Cambrai. Backing the brick-and-stone building is a vast, sloping tree-filled park designed by André Le Nôtre, the landscape architect who also created the gardens of the Château de Versailles and Vaux-le-Vicomte. Renovated and expanded in 2002, the museum holds more than 170 Matisse works. While lacking many familiar postcard pieces—a stunning and often reproduced 1918 self-portrait is an exception—the collection covers his entire career, from an early painting of a Breton weaver to his loudly colored Fauve period, a broad selection of sculpture, and an entire room dedicated to the dazzlingly bright paper cut-outs that were the focus of his final years. It is one of the most important gatherings of Matisse works in the world.

I drove back to Le Cateau to peruse the museum’s holdings. Walking through the well-lit galleries gave me an even deeper appreciation of how the young Matisse internalized the vibrant colors he glimpsed as a boy in the green fields, stained glass, and, most of all, the sumptuous fabrics of northern France. These tones emerged—eventually, fully—on his canvases, and remain as joyous as ever.

This article originally appeared in the December 2019/January 2020 print issue of DestinAsian magazine (“Regarding Henri”). 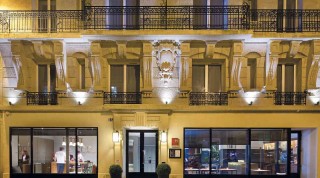 Hotels don’t have to be très cher in the French capital; here are seven—all under US$125 a nigh... 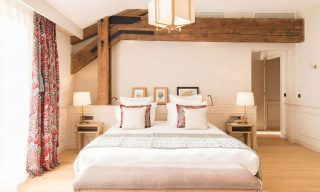 The first five-star hotel in the brandy-making town of Cognac, Chais Monnet offers a modern take on ...