The major gateway in West Sussex will be the carrier’s third European destination after Athens and Berlin. 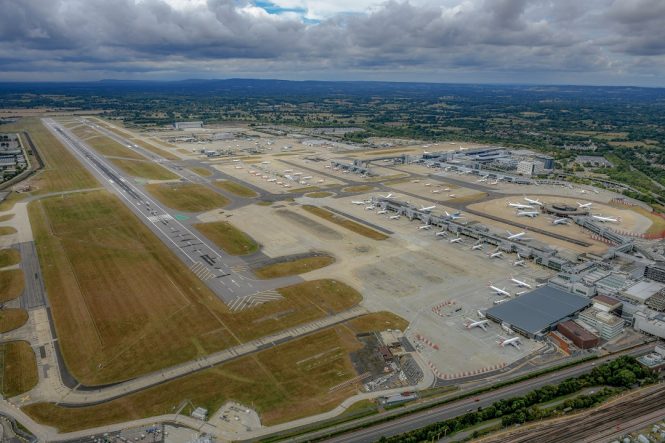 An aerial view of London Gatwick Airport. (All photos courtesy of Scoot)

Singapore Airlines’ low-cost subsidiary is launching a new service between Singapore and London’s Gatwick Airport next month, with the route flown via Bangkok Suvarnabhumi Airport. It will mark the airline’s first foray into the United Kingdom, and Scoot will become the sole budget carrier to operate nonstop flights between Bangkok and London.

This service is slated to begin on December 16 and run until the 30th. Seasonal scheduled flights will then resume on a twice-weekly basis from March 22, 2020, with another weekly service added from March 27. Scoot says it will conduct a further review of the route and consider a potential increase in frequency based on demand and regulatory approval. Scoot-in-Silence, the economy-class quiet zone, on board a Scoot Boeing 787 Dreamliner.

Westbound Flight TR750 will depart Changi on Tuesdays, Thursdays, and Sundays at 11:35 a.m., touching down in Bangkok Suvarnabhumi for an hourlong stopover at 1:05 p.m. local time. It will then arrive at London Gatwick at 8:05 p.m. after 13 hours in the air. The total journey time from Singapore to London is estimated at 16 hours 30 minutes. This is slightly longer than the eastbound return, which clocks in at 14 hours 40 minutes. Scoot Flight TR751 will leave Gatwick at 10:05 p.m. to land in Bangkok at 4:10 p.m. the following afternoon, before reaching Singapore at 8:45 p.m. local time.

These services be operated by Scoot’s widebody Boeing 787-8 Dreamliners offering both Economy and ScootPlus cabins with inflight Wi-Fi. Customers can choose to upgrade to Scoot Plus or Scoot-in-Silence, a dedicated quiet zone. With the addition of London, Scoot will serve over 30 destinations in December 2021 as it progressively rebuilds its network to the pre-pandemic count of 68 cities. Scoot currently operates daily flights between Singapore and Bangkok.