An island-hopping cruise around the Inner Hebrides provides a glimpse into a side of rural Scotland most visitors never get to see. The bay at Port Ellen, Islay.

A holiday in Scotland is always something of a gamble when it comes to the weather. Mine seemed to be paying off. As my train from London glided serenely into Glasgow Central station on a pleasant May afternoon, I spotted a fair number of locals lolling on the grassy banks of the River Clyde in shorts and T-shirts, replenishing their vitamin D levels after the dreich days of winter.

Late spring is my favorite season here, not least because the days are so long this far north. Sunrise comes around four in the morning and you can still be outside easily reading a book at 10:30 in the evening. In the glorious Scottish countryside, even a damp, misty day adds a magical allure to the glens, forests, and mountains. And if it’s really raining cats and dogs, there’s always a pub to dry out in, with a roaring fire and a well-stocked shelf of whiskies behind the bar. But I wasn’t hanging about in Scotland’s largest (and, in my experience, Britain’s friendliest) city long enough to contemplate all this. Changing trains, I was soon headed west through Glasgow’s pebble-dashed suburbs and into an increasingly bucolic landscape dotted with small villages. As I gazed out of the window at the passing scenery, an oblivious teenage seatmate chugged through a bottle of bright-orange fizzy pop, LOL-ing and OMG-ing into his mobile phone.
The railway clung to the southern banks of the ever-widening Clyde until it reached its terminus at the seaside town of Gourock. From there, I caught a ferry across the upper Firth of Clyde to Dunoon.

When the sun is out, the west coast of Scotland is a glorious place to be, with clear waters and some stunning beaches. Yet it’s largely ignored by the English, who prefer to holiday in mainland Europe. (Many Scots are not too sad about that.) Instead, in summer, you’ll encounter plenty of Germans, Dutch, and Swiss, even Italians and Spanish, who come to hike and drive in this sparsely populated corner of Britain. En route to the Isle of Arran.

My fingers were crossed for blue skies in the days ahead as I sat listening to the laughter and almost-impenetrable banter of the ferry’s Scottish passengers, despite the gusty winds that tugged at coats and hats. Dolphins played in our wake, though I seemed to be the only one who was excited by them. There really is no better way to explore the inlets (lochs, as they are always called in Scotland) and islands of this craggy coastline than by boat, and I was looking forward to spending the next three days doing just that aboard a seven-cabin vessel called Seahorse II.

Twenty-five meters long and built to navigate the fjords of Norway, the former ferry looked suitably robust as I went aboard at the Holy Loch Marina. She’s a no-nonsense sort of craft, newly refurbished by her current owners but not what you would call luxurious—there’s definitely no Jacuzzi or cocktail bar, and only two of the cabins have en-suite bathrooms. But what the “wee ship” lacks in amenities she makes up for in character and the ability to pootle into tight bays where bigger boats simply cannot go, getting you up close to the region’s prolific wildlife.

Oban-based St Hilda Sea Adventures, which operates both Seahorse II and a 14-meter ketch named St Hilda, offers several different routes over the season. These go as far afield as the remote Outer Hebridean islands of St. Kilda, as well as to Staffa, Iona, and Skye or through the Great Glen, stopping at various points en route to give passengers the chance to kayak, explore on foot, and—if you’re feeling hardy—swim. A view across the water to the rugged east coast of Jura, the fourth largest island of the Inner Hebrides.

My trip was a short repositioning jaunt among the Inner Hebrides prior to Seahorse II’s first cruise of the season with regular passengers. Together with skipper Charlie McLeish, boatswain Roy Baxter, French chef Gilles Morisot, and Julie Dubois-Marshall, whose Anglo-Swiss family owns the boat, we would sail down past the Isle of Arran, around the peninsula of Kintyre, and up past Islay, Jura, and the Isle of Mull before docking in Oban.

Setting off under a patchwork of clouds the next morning, we motored south into the Firth of Clyde toward Holy Isle, where we moored for a lunch of chicken and potatoes. One of the earliest residents here was the seventh-century Irish monk St. Molaise, who lived in a cave on the west coast for several years. These days, Holy Isle’s spiritual credentials come in the form of the Centre for World Peace and Health, a Tibetan-Buddhist meditation retreat complete with prayer flags and whitewashed stupas. Most of the tiny island, however, is a sanctuary for Scottish ponies and sheep, which roam wild across its scraggy hills.

“I just love the Hebrides, it’s such a special place,” Julie told me over mugs of steaming tea. “The sailing is superb, and you can anchor in the most idyllic places and feel really cut off from the world. And you never know what wildlife you’ll encounter. We’ve seen humpback whales breaching around here, and have come across basking sharks. Each time it’s different.” The harbor at Campbeltown on the Kintyre Peninsula.

We cruised on toward the Kintyre Peninsula and reached the deep, sheltering bay of Campbeltown in time for a dinner of kedgeree (spiced rice, eggs, and smoked haddock) and Eton mess (a mixture of strawberries, broken meringue, and whipped cream.) I sat out on deck afterward observing the numerous gulls that swooped low across the bay as the sun started to dip below the horizon, casting rippled patterns on the calm water.

The next morning, porpoises guided us south while gannets dive-bombed the sea for their breakfast. The coast of Northern Ireland was visible on the horizon as we rounded the Mull of Kintyre, a craggy headland immortalized in the eponymous 1977 song by Paul McCartney (he still owns a farm nearby). Then we were headed north again, with the rugged island of Islay on our port side. On a regular cruise there might be time to stop and explore, but we were on a tight schedule. Which meant, with much regret, there was no time to visit Islay whisky distilleries with nearly unpronounceable names such as Bunnahabhain, Bruichladdich, and Caol Ila.

In the mid-19th century, the population of Islay stood at about 16,000. Forty years later, that number had been cut in half by the Highland Clearances, when landlords evicted farmers from their land to make room for more profitable sheep-rearing. Most of the dispossessed made new lives for themselves in North America, Australia, and New Zealand. Today only around 3,500 people live here, many in picture-postcard cottages around the main town of Port Ellen.

There are lovely sandy beaches dotted around the Islay coast; some, such as Killinallan, involve a hike to reach, which makes their isolation all the more beguiling when you do arrive. There is plentiful birdlife too. In spring, thousands of white-fronted and barnacle geese fly off to their breeding grounds in Greenland, to be replaced by the arrival of lapwings, redshanks, corncrakes, curlews, and snipes. Seahorse II moored off the village of Toberonochy.

With the sun still being kind to us, the boat cruised past neighboring Jura, the wildest isle in the Inner Hebrides. Three conical mountains, the Paps of Jura, loomed above its western shore. Farther north, we steered well clear of the notorious whirlpool in the Gulf of Corryvreckan. In the summer of 1947, George Orwell, who was living on Jura at the time to write Nineteen Eighty-Four, nearly drowned here when his dinghy capsized.

Our goal was Toberonochy village on the island of Luing, which we reached by mid-afternoon. After anchoring in its bay, we launched a small inflatable boat and set off in search of sea otters. We were unsuccessful, but it was still a thrill to cut across the glassy surface of the water and be joined instead by eider ducks, herons, oystercatchers, and inquisitive seals.

The next morning, I drew back my cabin curtains to gaze out at another gloriously sunny start to the day—only to be greeted by squally rain and thick cloud. I hunkered down on a sofa in the boat’s cozy lounge with a novel I’d been meaning to read for ages as we motored on past the Argyll coast and docked just north of the town of Oban, my jumping-off point.

I said my thank-yous and goodbyes and waited for a bus to the railway station.

A chatty middle-aged man with a hypnotically lilting accent was at the bus stop too, and we soon fell into conversation—about the erratic bus timetable, about the recent car crash at the end of the lane, about his seeing Jimi Hendrix in concert in 1970, and about his upcoming dinner of liver and bacon. The sun was back out and I warmed myself as he talked. When the bus arrived, I motioned for him to get on first. “Oh no, thank you,” he replied with half a smile. “I’m not going anywhere. Why would I want to leave?”

The Details
St Hilda Sea Adventures offers a range of Hebridean cruises from April to October from about US$628 per person for a three-night voyage to 11-night cruises from US$2,300 per person, including meals and most excursions. 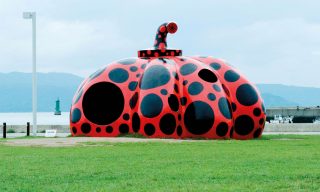 Why You Should Go Island-hopping for Art in Japan

A major contemporary art festival shines the spotlight on an oft-forgotten part of Japan. 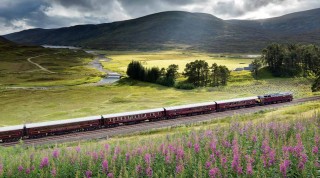 Belmond brings a new world of luxury with the launch of its Bamford Haybarn Spa. 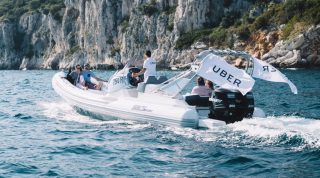 Did You Know You Can Island-Hop in Croatia Via UberBOAT?

With its multitude of magnificent islands, the best way to explore Croatia is via boat. 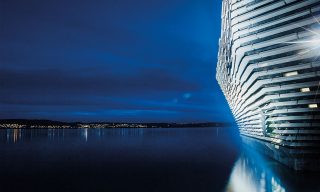 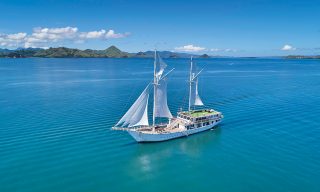