Some of the planet’s most beguiling World Heritage sites are found in Southeast Asia. Read on for ways to see five major UNESCO-listed attractions in a whole new light. 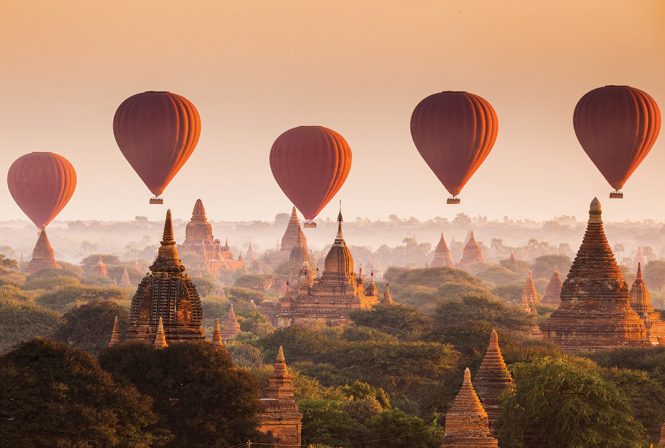 Hot-air ballooning at sunrise is a must-do experience while in Bagan.

On Safari in Khao Yai

Thailand’s oldest national park is one of the few places in the country where you can see wild elephants—some 300 of them—in their natural habitat. You’ll also likely encounter gibbons, barking deer, pythons, and some of the hundreds of species of birds found across the 2,100-square-kilometer sanctuary. Khao Yai National Park contains one of the largest intact stretches of monsoon rain forest in Asia, which is why it was named a World Heritage Site in 2005.

Get a closer look at Khao Yai’s natural treasures by booking a half-day, full-day, or night safari with local operator Greenleaf Tours. Jump in a jeep with a guide for hours of wildlife spotting, perhaps interspersed with a swim under a waterfall, a trek, or sunset drinks while watching thousands of bats fill the sky as they leave their roosts to forage for food. Better yet, the park is just 120 kilometers northeast of Bangkok, and is easily accessible by rail and road.

What could be a better start to the day than a hot-air balloon ride at sunrise? During the dry season between October and April, Balloons over Bagan offers a once-in-a-lifetime adventure that sees you floating over some of the most beautiful Buddhist monuments in Myanmar, if not the world. Built between the 9th and 13th centuries by the powerful Pagan Kingdom, the archaeological site contains more than 2,000 monuments, from gilded temples and red-brick pagodas to gleaming whitewashed stupas, all dotted across a vast plain on the edge of the Irrawaddy River.

Hot-air ballooning is a calm and crowd-free way to gain an appreciation for the beauty of Bagan, which happens to be among the most recent sites to receive World Heritage status. Your lofty journey ends on the ground with a champagne breakfast at the foot of a temple, your transfer chariot (a converted vintage bus) ready to whisk you back to your hotel. Be sure to book your spot months in advance. 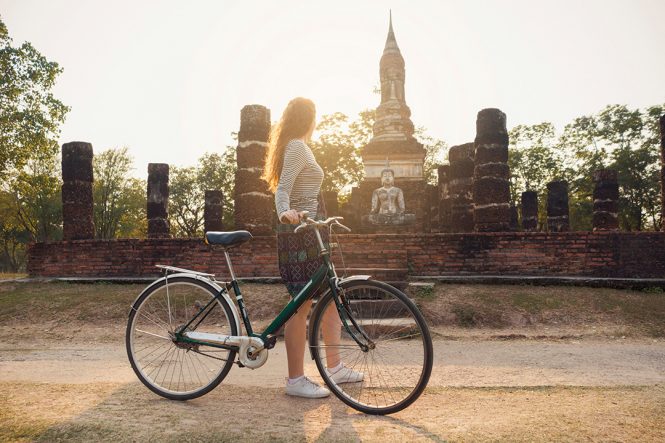 Exploring the uncrowded ruins of Sukhothai on two wheels.

Hoi An on a Plate

With a well-preserved patchwork of Chinese shophouses and temples, a Japanese-built bridge, and grand French-colonial mansions, the Vietnamese town of Hoi An is a vibrant reflection of the many nationalities that have traded here over the centuries. Its hundreds of eateries continue to celebrate the flavors and recipes brought in by the transient population. And you’ll have the chance to savor this culinary history on a tour run by The Original Taste of Hoi An.

The guided walk stops in markets to meet stallholders, and hole-in-the-wall restaurants to sample all manner of local delicacies. Over four hours you’ll bite into banh mi (baguettes stuffed with pâté, barbecued pork, and coriander), cool down with kem ong (ice cream tubes), and slurp bowls of cao lau, fragrant hand-cut noodles topped with pork, rice crackers, and fresh herbs. This isn’t just the best lunch experience you’ll likely have in Vietnam, but it also offers insights into the country’s culture as told by your guides and the cooks with whom they collaborate with. 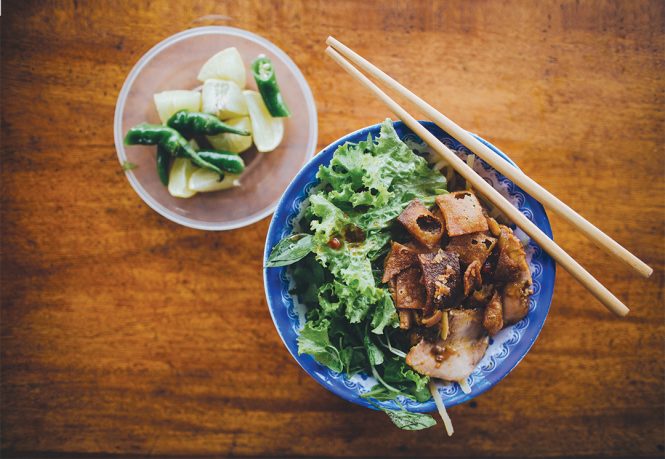 A bowl of pork noodles topped with lettuce, fresh herbs, and rice crackers in Hoi An.

Ayutthaya might be the most well-known of Thailand’s former imperial capitals, thanks in no small part to its proximity to Bangkok. But anyone planning an overland trip into the north should stop by the old city of Sukhothai, which flourished in the 13th and 14th centuries. What remains from that era is an astounding 45 square kilometers of partially rebuilt ruins: 700-year old columns, temples, and spires presided over by massive Buddha statues.

Because of its scale, the UNESCO-listed Sukhothai Historical Park is best explored on two wheels with Cycling Sukhothai Bicycle Tours. Full-day excursions are a leg-stretching way to learn about the area’s customs and traditions, while sunset journeys take in the main highlights, not to mention dramatic vantages for end-of-day photos.

Time your visit to coincide with the “festival of light,” Loy Krathong, which originated here and is celebrated annually on a full moon in the 12th month of the Thai lunar calendar (this year, it falls on November 13). Be sure to join locals amid candle-lit temples, releasing floating lanterns into the river to pay homage to the goddess of water.

From sunrise to sunset, Cambodia’s immense Angkor temple complex attracts more than 7,000 visitors every day. Thankfully, there are ways to avoid the crowds while still capturing all the drama of the world’s largest religious monument. Helicopters Cambodia offers bird’s-eye views of the World Heritage site, whether on a 14-minute jaunt over Angkor Wat, Sras Srang, Pre Rup and the Eastern Mebon temples, or an extended half-hour Grand Tour that also takes in more distant ruins and the emerald paddy fields ringing Tonle Sap lake.

If you prefer to keep your feet firmly planted on the ground, sign up for the brand-new Temple Running experience by Anantara Angkor Resort & Spa. Lace up your shoes at dawn and enjoy a serene jog around the ornately carved ruins, your path either navigated by a private tuk-tuk (which also has chilled water and a breakfast basket on board) or a dedicated fitness coach.

This article originally appeared in the first print issue of DestinAsian China magazine (“A World of Difference”). 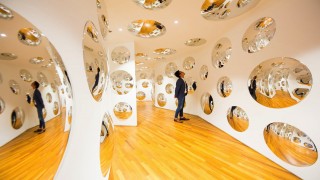 Whether you're in Bangkok, Seoul, Singapore, Hong Kong, Kuala Lumpur, or Jakarta this weekend, we've... 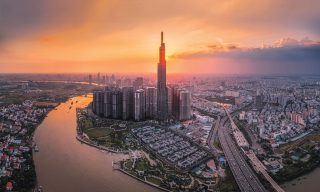 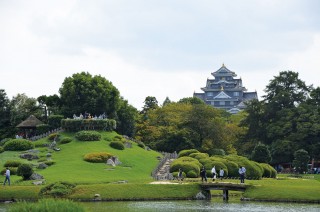 For a respite from the crowds of Kansai’s more popular destinations, hop aboard a bullet train to ... 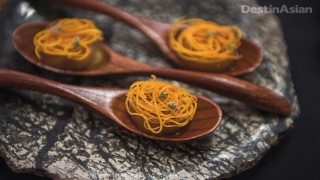 A Taste of the Philippines

The food scene in Philippines is now even more vibrant thanks to its dedicated local talents.