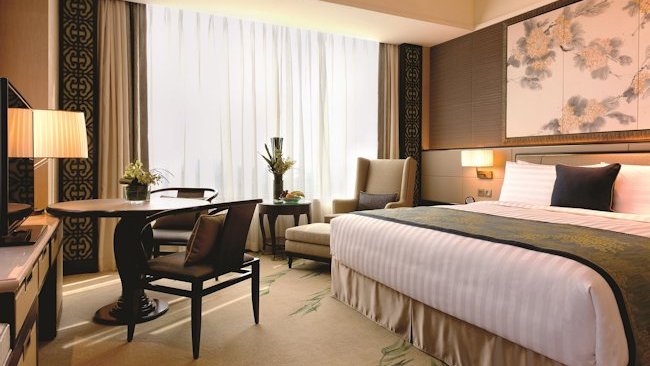 Located in the city’s New Western District, the hotel is within easy reach of the city’s best-known tourist spot, the peaceful Slender West Lake. Its 351 guest rooms and 18 suites offer views of the river or Mingyue Lake, while the 26th-story Horizon lounge is available to guests reserving a suite—the largest of which is 200 square meters.

Although Yangzhou is not a household name when it comes to traveling in China, it has much to commend it. The story may be apocryphal, but Marco Polo is rumored to have served in Yangzhou under Kubla Khan between 1282 and 1287. Far less doubt, however, clouds the city’s role in Chinese poetry; from the Tang to Qing dynasties, poets have sought solace in and derived imagery from Yangzhou’s watercourses and gardens. The food—known as Huaiyang— is also something to write home about. Expect elaborate dishes, lots of tofu, and a dedication throughout the city to preserving traditional recipes.

To mark the opening of the hotel, Shangri-La is offering an opening rate of US$140 per night for a Deluxe City View Room and breakfast at Cafe Xiu. Reservations can be made here—the offer expires March 31, 2013.