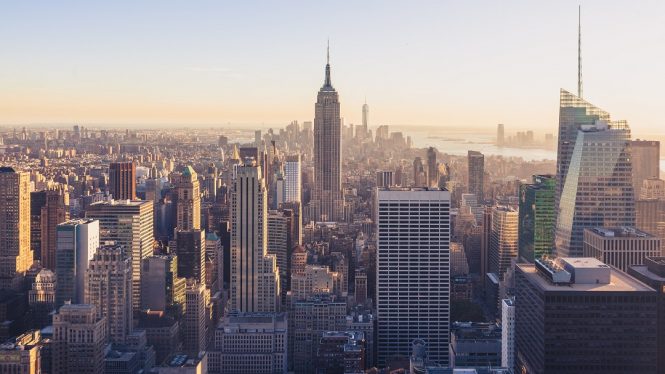 The Manhattan skyline as seen from the top of Rockefeller Center. (Photo: Jonathan Riley/Unsplash)

Months ahead of its 30th anniversary of running flights to New York this July, Singapore Airlines is ramping up its services to the Big Apple in a big way. Passengers will be flown three times a day starting in late March—a frequency unmatched at any point in its history even before the Covid-19 pandemic.

Following a two-year hiatus, nonstop services between Changi and Newark are set to resume on March 27, with the route operated on a daily basis aboard two-class Airbus A350 ULR aircraft. Notably, the restored Newark flights will not replace but rather run alongside the daily nonstop services to New York JFK launched in November 2020. On the same date, SIA is also upgrading its daily flights to JFK flown via Frankfurt to A380s equipped with the latest Suites and business-class cabins from 2017. As Singapore Airlines has fifth-freedom rights on the route, these A380 flights are also bookable for those who are only traveling between Frankfurt and New York.

SIA’s return to Newark will mark a full restoration of its pre-pandemic network within the United States. The carrier has released its schedule for the northern summer season from March 27 to October 29; it promises added flexibility for travelers booking nonstop flights to or from New York, with the option of either a late-night or late-morning departure. Newark-bound Flight SQ 22 will depart Changi at 11:35 p.m. each night and arrive in New Jersey at 6 a.m. the next day after 18 hours and 25 minutes in the air. Flight SQ 23 will then leave Newark at 10:25 a.m. and return to Singapore at 5:10 p.m. the following day. As for SIA’s daily nonstop services to JFK, outbound Flight SQ 24 is scheduled to take off at 11:50 a.m., and land in Long Island at 6:30 p.m. on the same date. Return service SQ 23 will leave JFK at 10:30 p.m. to reach Changi two days later, at 5:20 a.m.

Meanwhile, Singapore Airlines’ A380 flights via Frankfurt will offer nighttime departures from either end. The initial westbound service, Flight SQ 26, is set to leave Singapore at 11:55 p.m. and touch down in Frankfurt at 6:45 a.m. the next morning. After stopping over for just under two hours, the super-jumbo will take to the skies at 8:35 a.m. before arriving in New York JFK at 11:10 a.m. local time. Flight SQ 25 will depart JFK at 8:55 p.m. and land in Frankfurt at 10:40 a.m. the following day; the A380 will then take off from Frankfurt at 12:30 p.m. to arrive back in Singapore at 6:50 a.m. the next morning, two days after leaving New York.

The nonstop Newark from Singapore service will not be a designated VTL flight, while both daily flights from JFK are set to retain VTL status through October. But it’s entirely possible that Singapore Airlines will eventually add the route to its VTL network, especially if there is strong travel demand over the coming months.