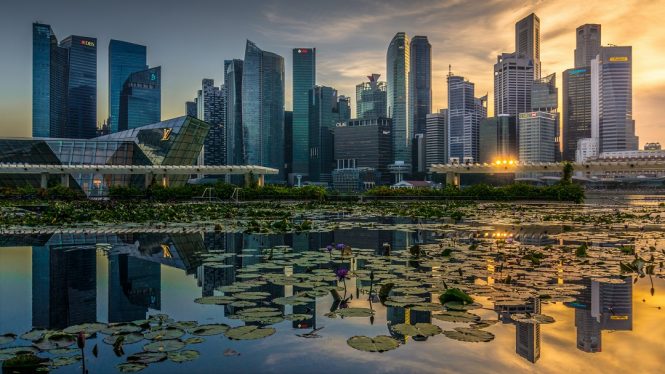 The skyline of Singapore’s CBD reflected in a lily pond at Marina Bay. (Photo: Mike Enerio/Unsplash)

For the very first time, the Lion City has topped a monthly index of “the best and worst places to be in the pandemic era” created by Bloomberg. The company credited border restrictions and a strict quarantine program with getting Singapore’s locally transmitted cases down to near-zero, and commended the city-state for one of Asia’s fastest vaccine rollouts, with roughly a fifth of its population already inoculated against the virus. Other countries around the region that have virtually eradicated Covid-19 from their shores — Australia, New Zealand, and Taiwan included — have been lagging behind when it comes to vaccination rates.

Bloomberg calculated each place’s score using a range of social indicators related to their domestic coronavirus outbreaks and overall quality of life. These include monthly infection and death rates, the percentage of tests returning a positive result, vaccination rates, and the severity of lockdowns. Other factors that influence the result are community mobility, the availability of universal healthcare coverage, GDP, and the place’s position on the Human Development Index.

Singapore has been given a score of 79.7, while New Zealand follows closely behind at 79.6. Australia, with its score of 76.2, rounds out the top three. Fourth-place Israel is the only country in the top five that is not in the Asia-Pacific region. Coming in at fifth place, Taiwan has been hailed as a success story in its pandemic response, as it has experienced no community outbreaks of Covid-19 and is one of the few areas in the world where schools did not close at any point during the crisis.

Singapore ranks well ahead of its Southeast Asian neighbors. Since last month’s report, Vietnam has risen four places to reach 11th, while Thailand fell by the same number of spots to come in at 13th, in part because of a third wave now gripping the country. Neighboring Malaysia ranks 20th, 10 places above India, which is currently experiencing its worst outbreak since the beginning of the pandemic.

Southeast Asia’s worst performers are Indonesia and the Philippines, ranking 34th and 45th respectively out of 53 countries and territories included in the Covid Resilience Ranking. Both have exceeded a million cumulative coronavirus cases; the Philippines reached the grim milestone yesterday after nearly 9,000 new infections took the nationwide total to just over 1,006,000.