The festivities will be held for the first time since 2019, with special events taking place along the Marina Bay waterfront. Following a Covid-induced hiatus, Singapore residents and international travelers alike will get to ring in the new year on December 31 through the city’s biggest countdown event and a fireworks display at midnight. Yesterday’s announcement of the Marina Bay Singapore Countdown 2023, presented by the Urban Redevelopment Authority, is another signal the island nation is well and truly out of the pandemic.

The lineup of programs taking place around the waterfront precinct include the Star Island experience, a multi-sensory fireworks musical extravaganza will be returning to The Float at Marina Bay. The ticketed show, which combines performances and state-of-the-art pyrotechnics, is extending to the nearby Marina Bay Sands Event Plaza for the very first time with a pre-show “activation.” More details will soon be released on starisland.sg.

The year-end celebrations at Marina Bay are set to begin long before the fireworks. Light projections will be beamed on the facade of The Fullerton Hotel Singapore and the Merlion throughout the last week of December to showcase artworks created by local students. Over at the Bayfront Event Space beside Marina Bay Sands, The Great Bay Fiesta will kick off on December 1 with circus shows, more than 30 food stalls, and rides and games paying tribute to the long-lost Great World Amusement Park ⁠— a major draw on Singapore’s entertainment scene from the 1920s to the 1970s.

Also in the offing is After Hours at The Lawn, where organizers will set up oversize games, booths serving all kinds of food and drinks, and a “chill-out zone” for relaxing and taking in the fireworks. On the other side of Marina Boulevard, The Promontory is hosting the Let’s Celebrate 2023 countdown concert by Mediacorp, while free performances will tempt more culturally inclined spectators at the outdoor theater and concourse of Esplanade – Theatres on the Bay.

For the latest updates, visit marinabaycountdown.sg. 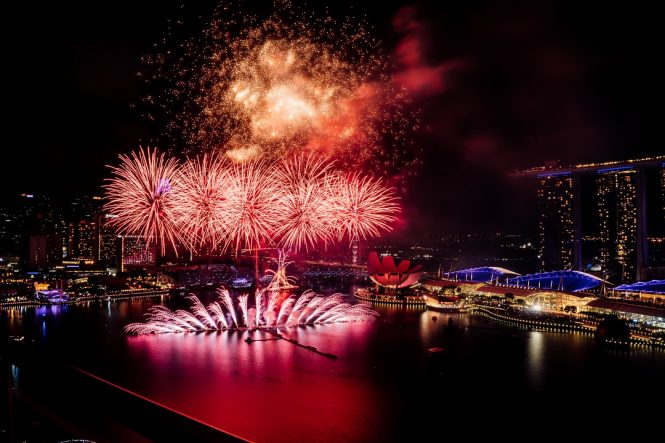