As an ambassador-at-large for Haiti and founder of Happy Hearts Fund, an NGO that rebuilds schools in areas hit by natural disasters, Czech supermodel Petra Nemcova is a busy lady. Yet she still made time to tell us how it all comes together in her line of travel-inspired candles, Be The Light New York.

Since your first trip to Haiti in 2007 how has the country changed?
When people think of Haiti, they think of the 2010 earthquake, dictatorship, and poverty, but in the last three years, there’s been a lot of growth. Hotels are opening—most recently, the Marriott Port-au-Prince—and businesses have come in to do production, such as Heineken and Toms Shoes.

As an ambassador, what’s a side of Haiti you wish to show people?
It’s one of those rare countries that still feels undiscovered and authentic. Just about every fourth person in Haiti considers themselves an artist, and Jacmel, a colorful port town on the south coast, is the cultural center of the Caribbean, filled with gorgeous mosaic murals. It also hosts an elaborate carnival each February; people spend all year creating their masks and costumes.

Where in the country do you go for an escape?
Off the southwestern coast is an island called Île-à-Vache. It’s beautiful, full of mangroves, and from there you can also take day trips out to Lovers’ Island, a small sandbar 15 minutes away by boat. It’s as private as it gets with only you, whomever you go with, and the birds that land there, until the high tide comes and washes over it.

Why did you choose hibiscus as the scent for your Haiti-inspired candle?
Happy Hearts Fund, which I began in 2005, has schools in four out of the six countries represented by my candles, including Haiti. We’ve rebuilt seven schools that were destroyed by the earthquake and have five more big schools opening there this year. Building a school makes you really get into a community, learning its unusual sides and the things it’s proud of. Despite Haiti’s struggles, its people have an incredible amount of joy, and hibiscus represents beauty and strength.

For more information, visit Be the Light New York; candles from US$98 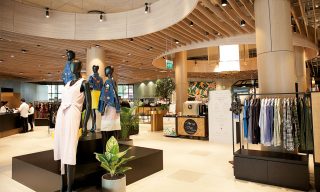