Though it isn’t possible to travel to or around Indonesia for now, we can still satisfy our wanderlust with AirPano’s 360-degree camera views. With international and domestic travel brought to a halt these days, it makes sense to while away a few hours browsing the AirPano website, which allows anyone with an Internet connection to traverse the world without stepping out of your home. In Southeast Asia, AirPano’s largest collection of 360-degree shots bring the natural beauty of Indonesia into full focus.

Home to over 140 million people at last count, Java may be the most populous of Indonesia’s main islands, but there are still gorgeous landscapes to be found in the rural hinterlands. In East Java province, AirPano users can marvel at the sunrise over Tumpak Sewu (the name is Javanese for “thousand waterfalls”), a series of 120-meter cascades tumbling over jungle-cloaked cliffs backdropped by the majestic 3,676-meter cone of Semeru – Java’s highest mountain. The astonishing scenery here looks straight out of Lord of the Rings, and Tumpak Sewu’s waterfalls have been shot in exquisite detail by Kamchatka-based photographer Alexey Matveyev through eight different aerial views.

Also in East Java is the rather more well-known destination of Mount Bromo, a must-see for anyone embarking an overland journey through Java and Bali. AirPano’s 18 perspectives from Bromo Tengger Semeru National Park showcase the elemental beauty of the Tengger Caldera: the camera soars directly over Bromo’s crater as plumes of steam rise from its boiling lake; offers bird’s-eye views of the savanna to the south of the volcano; and captures a stargazing experience on Lautan Pasir, “the Sea of Sand” that covers much of the caldera floor. 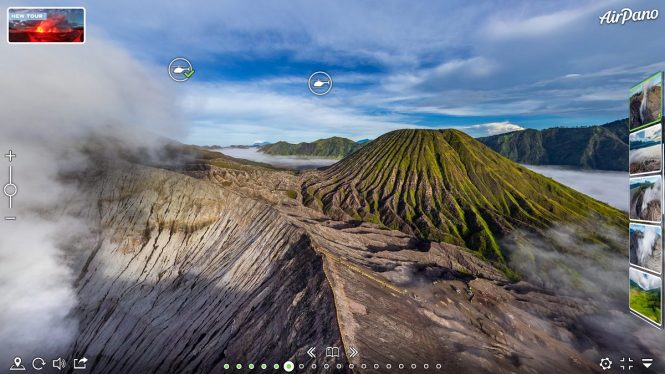 An aerial view of smoking Mount Bromo and the surrounding Tengger Caldera. 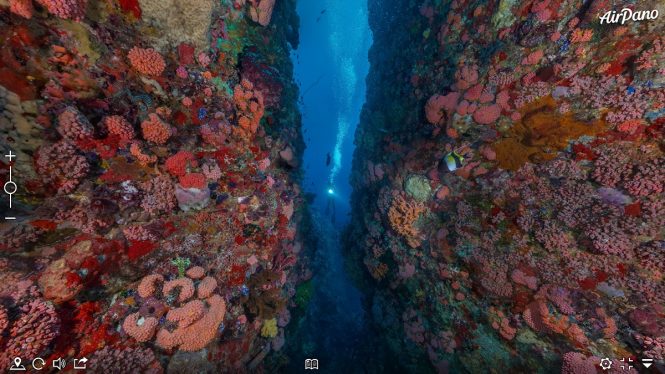 Eastern Indonesia’s Komodo National Park also makes an appearance on AirPano, with almost 20 panoramic photos taken in and around the UNESCO-listed wildlife sanctuary. Even non-divers will revel in the sight of a coral-encrusted underwater cave where viewers can virtually swim with a school of red soldierfish, as well as Moorish idols, yellow longnose butterflyfish, and emperor angelfish darting through the coral gardens. Above the waves, several shots were taken at the ranger station at Rinca island: you can take a look at the resident Komodo dragons up close without worrying about being bitten.

Over in West Papua, the remote archipelago of Raja Ampat has long drawn divers for its extraordinary diversity of marine life. Two over-under panoramas from Raja Ampat’s Jellyfish Bay provide a glimpse of what it’s like to dive with stingless jellyfish, while jaw-dropping perspectives on a multitude of karst islands rising from the sea point to the area’s reputation as a lost paradise. An unexpected bonus from another multi-photo series largely dedicated to Raja Ampat is the aerial panorama taken in the Banda Islands, which was once the world’s only source of nutmeg and mace. Perhaps these 360-degree photos will have you planning an Indonesian sojourn once the pandemic passes. 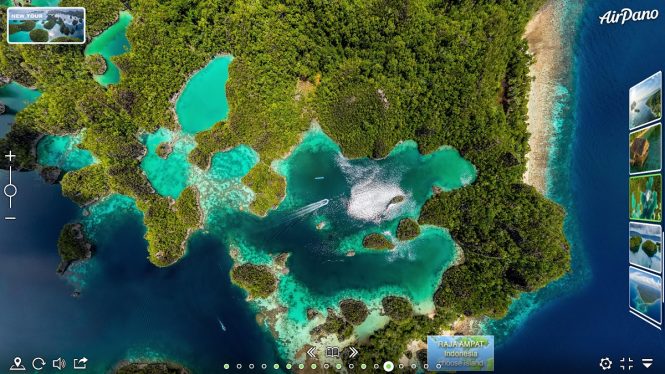 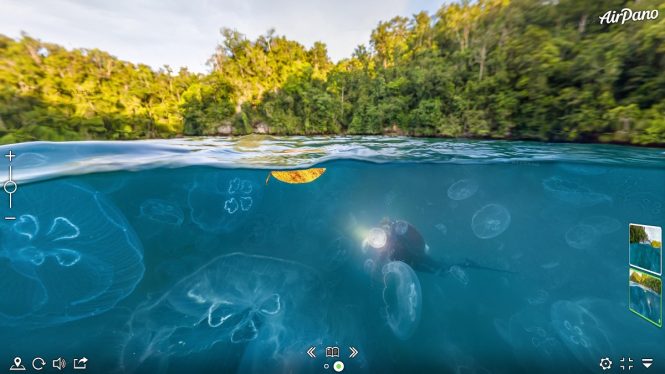 A bird’s-eye view of the seascapes around Wayag island, also in Raja Ampat.