—The Vibe
Melbourne’s cool credentials keep getting better. Sydney may be the largest and flashiest city in the county, but its southern sister certainly delivers on the style stakes. Australia’s capital of live music, galleries, and museums, Melbourne is a place of contradictions and hidden charms. It prides itself on nurturing a thriving arts scene, which sees it attract some of the world’s top cultural events and festivals. But locals are also sports crazy, and flock to watch Australian Rules Football, cricket, tennis, and Formula 1 racing. Located on the leafy banks of the Yarra River and spliced by a network of clattery trams, Melbourne continually pips World’s Most Liveable City awards, with stellar shopping, restaurants, cafés, and nightlife. The rumor that you can live four seasons in one day is true, even in summer. But with so much to keep you entertained indoors and out, you won’t even notice the changes in the seasons.

—Restaurants Du Jour
Chef Dan Hunter is fast putting rural Victoria on the map. After moving on from the Royal Mail Hotel in Dunkeld, where he won culinary awards aplenty, he is single-handedly reinvigorating the Otway hinterland with Brae. The restaurant is set on 12 hectares of working farmland, and Hunter’s dishes incorporate produce grown and raised on these fields, complemented by artisan produce from other Victorian growers. It’s all organic, sustainable, and ethical, which means menus change regularly, according to what is growing. • Back in the CBD, chef Andrew McConnell’s new Japanese-style diner, Supernormal, comes replete with a private karaoke room. Begin your evening upstairs with supremely fresh plates from the raw bar before moving on to twice-cooked duck bao or cold-rolled pork belly with white kimchi. • Billed as Australia’s only ticketed dining room, Prix Fixe comes courtesy of acclaimed dessert chef Philippa Sibley. The concept is simple: pay AU$49 for two courses and a glass of wine at lunch and $89 for four courses at dinner, and you’ll receive dishes prepared to a theme: A Midsummer Night’s Dream, perhaps, or the Spring Racing Carnival. • Adding to the revival of Collingwood’s Smith Street, Saint Crispin puts a contemporary twist on tapas. While you wait for a table, sink into chesterfields and sip inspired cocktails at upstairs bar Thomas Olive; in the dining room, dishes such as smoked-eel croquettes and quail with chorizo, polenta, and sherry steal the show.

—Retail Therapy
There’s a lot to love about shopping along Melbourne’s atmospheric laneways (our favorites include Manchester and Flinders lanes for local fashion and Degraves Street to refuel on good coffee), and the graffiti-clad streets continue to reinvent themselves with new boutiques. The latest additions come from Sydney label Bassike, whose all-white warehouse-like store in Rankins Lane (originally a horse stable dating to the 1890s) is the perfect place to pick up cashmere and cotton essentials in a crisp, neutral palette. • The new boutique from Swedish-owned Acne Studios calls The Strand Arcade on Little Bourke Street home and features an eye-popping design of perforated aluminum, rolled out in L.A. and Paris before coming down under. There’s fashion for him and her plus shoes and accessories–don’t miss the “Stockholm Syndrome” scarf, created especially for Australian shoppers. • While Melbourne prides itself on its laneway shopping, the hottest retail ticket in town today is the Emporium. The seven-level complex is home to more than 225 stores, with Australian representation from the likes of sass&bide, Willow, and Zimmermann. Boutiques making their Australian debut in here include UCLA and youth brand Zoo York.

—Café Culture
Serious coffee connoisseurs will want to make a beeline for Seven Seeds—it’s not new, but it continually wins awards for its dedication to the brew. And that’s saying something in a city that prides itself on having forced Starbucks to close up many of its shops. The Carlton-based micro-roaster and café has a superb house blend as well as a selection of carefully sourced single origins and guest blends, which pair perfectly with a toasted Rueben. • It has only been open a couple of years, but Collingwood’s Everyday Coffee is already widely regarded as the city’s best brew bar. The casual space offers a rotating selection of beans and roasts, including Seven Seeds for black espresso and Market Lane Guatemalan Santa Isabel for pour-overs. There are croissants and cakes, plus coffee paraphernalia to take home. • Brunswick Street in Fitzroy has its fair share of good cafés, but few have people talking more than newcomer Stagger Lee’s, where a coffee-lover’s menu is dedicated to single-origin espresso and filter coffee. Pair this with a liquor license—try the Bucket of Blood, with peppercorn vodka, red wine, Vegemite syrup, and tomato juice if you dare—and dishes such as truffled polenta with in-season pine mushrooms, and you have all the ingredients for a winning formula.

—Market Value
Spread over two city blocks and heritage listed, Queen Victoria Market sells everything from cheese to clothes, vegetables to souvenirs. The largest open-air market in the southern hemisphere, Queen Vic is the only surviving 19th-century market in the CBD. You could spend a day exploring the hundreds of stalls—just don’t miss ordering a hot jam doughnut from the food truck, serving up the warm pockets for more than 50 years. • The Camberwell Sunday Market remains Melbourne’s most popular weekend haunt for secondhand knickknacks, with more than 370 stalls selling pre-loved clothes, accessories, furniture, and collectibles. A large number of stands are casual, which means that plenty of bargains can be had. • Closer to town in Fitzroy, the Rose Street Artists’ Market showcases the city’s top emerging and established creative talent every Saturday and Sunday. Celebrating 10 years, the market is a great place to pick up one-off photographs, fashion and jewellery, homewares, collectables, and even vintage pieces—there’s also live music and organic snacks.

—Main Events
First held in 1905, the Australian Open (Jan. 19–Feb. 1) tennis tournament is the first Grand Slam event of the year. While the world’s best players often struggle with the summer heat—the average on-court temperature in 2009 was 34.7ºC—fans keep cool at alfresco bars ringing Melbourne Park’s many stadiums. • A celebration of Victoria’s love of the culinary arts, the Melbourne Food & Wine Festival (Feb. 27–Mar. 15) offers a diverse program of more than 200 events, with happenings in restaurants, along river banks, down laneways and deep into the state’s picturesque wine country. Highlights in 2015 include Return to Terroir, a gathering of more than 40 of the world’s leading biodynamic wine producers. • Melbourne is widely regarded as Australia’s fashion capital, so it comes as no surprise that the city is the only antipodean destination to host The Fashion World of Jean Paul Gaultier: From the Sidewalk to the Catwalk exhibition (until Feb. 8). The first show dedicated to the playfully irreverent designs of the groundbreaking French couturier features more than 140 garments in addition to photographs, sketches, stage costumes, and excerpts from runway shows. Check out the first dress created by the designer in 1971 as well as haute couture dresses worn by Nicole Kidman.

—After Dark
The spirit of choice at Smith Street’s Los Barbudos is rum—there are more than 90 labels to choose from. Taking its cues from Cuba’s golden age, the suitably sultry bar is popular for its potent frozen daiquiris, along with other Caribbean favorites. In the courtyard, the Voodoo Jerk Truck does a roaring trade in jerk pork ribs and fried chicken. • Tasmanian whisky wins awards around the world, and now it has a dedicated home at the Nant Whisky Bar on Driver Lane. Dedicated to the Nant label and the finest single malts from around the globe, it also serves Tasmanian wines, beers, and dishes using products from the Apple Isle. • He may have a clutch of restaurants across town, but that hasn’t stopped chef Andrew McConnell from taking things up a notch—literally. Topping his restaurant Cumulus Inc., new wine bar Cumulus Up features a charcoal canvas offset with the flash of mirrors and gently glowing blown-glass bells. The excellent list of craft beers includes the hard-to-find 961 Beer from Lebanon, complemented by the snacks that McConnell does so well—duck waffle, foie gras, and prunes, anyone?

—Alfresco Offerings
It may not enjoy the near-endless summer sunshine of Sydney, but Melbourne puts on a brave face with its fair share of alfresco cinemas. Held on the lawn at the Royal Botanic Gardens, Moonlight Cinema (until Mar. 29) features a similar roster of films to its Sydney sister—there’s also an L.A.-style food truck and fully licensed bar. • Atop Curtin House at 252 Swanston Street, Rooftop Cinema (until April) sees you pull up deck chairs and watch the latest films backdropped by the shimmering lights of the CBD. Bring your own blanket. • And the Shadow Electric (until Mar. 16) outdoor cinema at Abbotsford Convent offers a packed program of documentaries, ’80s classics, cult flicks, and the best new studio releases. • Balmy Fridays and Saturdays throughout summer see Melbourne Zoo host a series of outdoor concerts. The Zoo Twilights (Jan. 30–Mar. 7) program features an electric group of talented artists, from the pop-stylings of Sarah Blasko through to the big band sounds of local favorite the Cat Empire.

—Side Trips
Surf breaks, dramatic coastal scenery, cozy homestays, and  local produce—what’s not to like about the Great Ocean Road? Stretching more than 240 kms along Victoria’s southeastern coast between Torquay and Allansford, the scenic drive offers plenty of diversions, many of them around Apollo Bay. On the east side of Cape Otway, the laid-back town is the site of the annual Apollo Bay Music Festival (Feb. 27–Mar. 1), paying homage to Australian folk, rock, and jazz artists.

This article originally appeared in the December/January print issue of DestinAsian magazine (“Sydney or Melbourne?”) 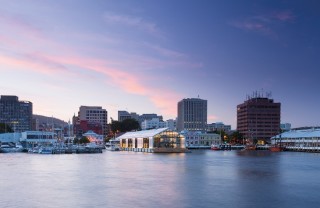 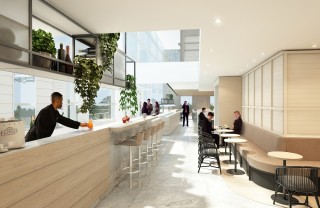 Brisbane’s Qantas Lounge Gets an Upgrade

After a major revamp of its facilities, the airline's expanded, new-look Brisbane lounge is due to o... 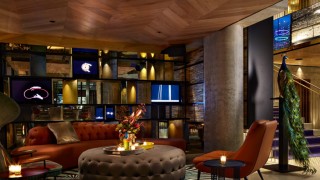 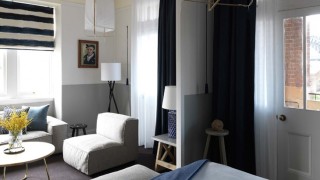 With only eight rooms, the Palisade is quite possibly Sydney's smallest hotel. But what it lacks in ...