With international services still some way off, the airline has found another way to cater to travel-hungry Bangkokians. 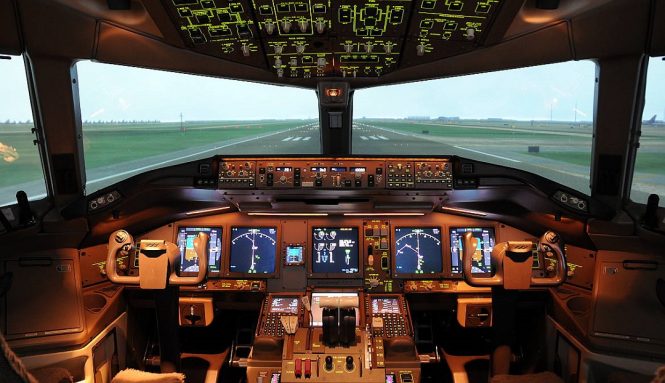 Think you have the chops to become a commercial aviation pilot? If you’re in Bangkok, it’s now possible to get a taste of life in the cockpit through a series of public sessions launched by Thai Airways. Scheduled visits are slated to begin in October under a new program called Thai Flying Experience & Beyond. This initiative will allow paying customers to use a series of flight training devices, specifically flight simulators, a cabin mock-up service trainer, a cabin emergency evacuation trainer, as well as a door trainer. Each session will be led by trained pilots and co-pilots, and timed so they do not affect professional flight training.

According to a statement released by the airline, visitors can choose between a half-hour Basic package, which costs 12,000 baht for two people; an hour-long Deluxe package priced at 24,000 baht (also for two); or a 90-minute Ultimate package that will set you back 36,000 baht for three users. When it comes to flight simulators, guests have the option of controlling one of four types of aircraft, namely the Airbus A380, Boeing 777-300ER, Boeing 747-400, and Boeing 737-400.

Thai Airways has also released a promotional deal for October 2020, with Deluxe packages starting from 16,000 baht and Ultimate packages priced at 24,000 baht. Reservations can be made at thaiflyex.thaiairways.com or on the program’s dedicated Facebook page.