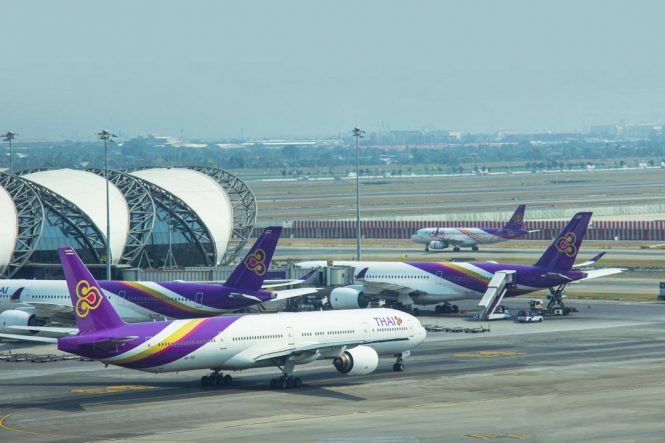 According to a report this week in the Bangkok Post, Thailand’s flag carrier is taking a major step toward rebuilding its global network. Starting today (October 1), Thai Airways will be selling tickets to international destinations where around 70 percent of the population has been vaccinated against Covid-19. Chai Eamsiri, acting executive vice president of the airline’s finance and accounting department, told reporters that flights would resume to profitable markets such as France, Germany, and the United Kingdom, as well as some cities in Japan and Australia. Chai added that destinations in China would return to Thai’s flight schedules next year.

Seventy percent coverage is understood to refer to a first dose, as none of the aforementioned countries except for China have fully vaccinated more than two-thirds of their total populations. In the case of Australia, projections by the ABC posit that 70 percent of eligible residents will be double-dosed around October 23. New South Wales is forecast to get there sooner, on October 6, suggesting that Thai might resume flights to Sydney before Melbourne, where the vaccination rate is lower.

Of course, it’s not the first time Thai Airways has operated scheduled international flights since they were suspended at the onset of the pandemic. July’s launch of the Phuket Sandbox scheme saw the carrier roll out weekly return flights to Copenhagen, Frankfurt, Paris, London, and Zürich, routing European holidaymakers directly to Phuket before going home by way of Bangkok. But the nonstop service between the Danish capital and Phuket was terminated just a month later, due to a surge in Covid-19 infections across Thailand.

Thai Airways is now undergoing a court-supervised restructuring process after filing for bankruptcy protection in May 2020. The company has committed to downsizing its fleet from 100 planes to 58, with the rest sold by the end of this year. The two Airbus A380s owned by the company are up for sale; Thai previously operated six superjumbos, of which four were leased (these are being returned in the coming months). Thai Airways is poised to become a much leaner operation with just five kinds of aircraft, compared to 12 types before the pandemic.