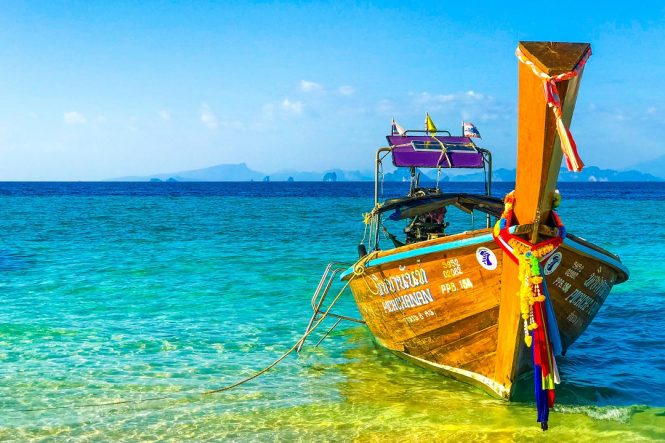 A long-tail boat tied up on a beach in the Phi Phi Islands. (Photo: Nakul/Unsplash)

In a televised address on Monday night, Thailand’s Prime Minister Prayuth Chan-ocha said quarantine rules for fully vaccinated visitors from certain nations would end on November 1, with tourists free to travel around the kingdom after testing negative for Covid-19 before departure and once again upon arrival. The top official hailed the border reopening as a “small but important step in decisively beginning the process of trying to restore our livelihoods,” while acknowledging that the “decision comes with some risk.”

China, Germany, Singapore, the United Kingdom, and the United States are among the countries now on the list, with more to be added on December 1. Tourists from places not classified as low-risk would still be welcome, but mandatory quarantines would apply. Whether the Phuket Sandbox scheme will continue beyond November remains to be seen. Launched in July, the initiative requires travelers to stay for seven days on the island, though they are not confined to their hotel rooms and can explore Phuket’s various attractions. A similar scheme was also rolled out on Koh Samui.

Prayuth also signaled that the current prohibition on alcohol would be dropped in time for what is usually peak holiday season. “By December 1, we will also consider allowing the consumption of alcoholic beverages in restaurants as well as the operation of entertainment venues,” he said.

The Prime Minister previously set out a goal of reopening Thailand’s borders in October, as the vaccine rollout picked up pace in popular destinations such as Bangkok, Chiang Mai, Hua Hin, and Pattaya. But those plans were shelved since the aforementioned cities had not yet reached the target of 70 percent coverage. So far, more than 49 percent of the country’s total population has received a first dose, while 33 percent is now fully vaccinated.