Early the next morning, I walk around the leaf-strewn pathways and discover several large, spirit-headed mannequins propped up in a gazebo. Driving through Loei city, I occasionally saw these freaky-faced figures with long noses and ghoulish grins in front of restaurants and shops, like scarecrows from another world. But Dansai, I learn, is the most ghost-haunted town, with its annual, three-day Phi Ta Khon celebrations in June. Also known as the Ghost Festival, its origins are rooted in a tale about Prince Vessantara—Buddha’s former incarnation—taking a long journey before attaining nirvana. Returning to his city, the response was so wild that it woke the dead. Today, young men dress in ragged robes and colorful masks with hats made from huat, the bamboo containers used to make sticky rice, but worn upside down. After breakfast, we head into town for a special meeting with the jao por guan, Dansai’s spiritual leader. Consulted about ceremonies, festivals and weddings, he also acts as medium to the spirit world, giving blessings from ancestors and helping people make the right offerings. Wearing a white shirt, white headband, and plum-colored pants, and surrounded by trays of food offerings and letters from villagers, the medium explains how he was chosen. Now aged 67, he was a 39-year old farmer with a family when his father identified him, among his brothers, as the next spiritual leader. We then visit Phra That Si Song Rak, a hilltop pagoda built in 1560 that gazes out over the Man River, once the border between the kingdoms of Ayutthaya and Lan Xang (a predecessor of modern Laos). It remains a symbol of mutual friendship between the Lao and Thai kings who were in alliance against an invading Burmese army. Because no blood was spilled between these two once-warring kingdoms, red clothing or red flowers are not allowed here. Back at Phunacome Resort, we walk past the ponds where several rescued water buffalo graze. There’s a fragrant smell of earth as dragonflies dart in the sunlight. Neeracha points to Phu Ang Rung, a mountain overlooking the resort. She joins annual hikes to the summit to pay respect to the “holy spirit” that safeguards the town. “Many of the mountains in this area have protecting spirits within them,” she says. A guest room at Phunacome Resort

Here, even the mountains are alive.

The following morning, Christopher and I drive to Mekong Villas in Pak Chom, Loei’s northernmost district. It’s not that far. But on the winding two-lane road known as Highway 211, we often find ourselves behind lumbering trucks or slowed down by construction, making the journey longer. Not that I’m complaining. Much of the blacktop hugs the Mekong, which flows past slow and silent. We’re not sure where the turn off is—Google’s GPS is vague in this remote area. Then we spot a roadside sign, and a gravelly path time-machines us to Thailand some 30 years ago. On a promontory overlooking the river and the densely wooded banks of Laos beyond, three traditional Thai houses are ensconced in thick greenery. Except for the sound of birds in towering bamboo groves and rustling leaves in the hazy afternoon, it’s silent and serene—a place to reconnect with nature. One of Mekong Villas’ wooden cottages

Mekong Villas sleeps up to a dozen people in six rooms. Interiors are rustic-chic and comfy, with local and Laotian pieces and furniture designed by Thai artist Somboon Hormthienthong. Two of the wooden villas were taken from Ayutthaya, Thailand’s former capital about 560 kilometers away, and rebuilt in their original detail. “It was fairly easy bringing them here,” says owner Narisa Chakrabongse. “Thai houses are based on a modular system of panels, which means that they aren’t difficult to dismantle and reassemble.” The third villa, with its log-cabin look, is secluded from the others. “This was designed by us using local materials and local builders,” Narisa adds. “It was done for my brother-in-law when he got married. I thought it was so romantic being able to walk there across a suspension bridge.” We learn more about the property—and Narisa herself—on a hike up a nearby hill to catch the sunset. Half British, a quarter Thai, and a quarter Russian, Narisa grew up shuffled between schools in rural Cornwall, England, where she was born, and Bangkok, where her connection to the country is rooted in royalty, being a great-granddaughter of Thailand’s King Rama V (1868–1910). As we pass mango groves, banana trees, and thick clumps of bamboo, Narisa recalls the first time she came here. “I still remember the day. It was beautiful. Little kids had made a mud slide into the river. Birds were singing in bamboo groves. It was a picture of how Thailand was many years ago, a Thailand of my childhood.” When an overgrown plot of land—with a sweeping river view to boot—was put on the market, Narisa snapped it up and began building the retreat. “Everyone thought I was crazy,” she says. But part of its charm, she adds, was the fact that there were no other Bangkokians in the area. After about 30 minutes we reach the summit. A beautiful 360-degree view greets us. In the burnished light of a spreading sunset, the river below is smooth as a mirror and cottony clouds spill over the hump of hills around us. The air smells of the forest. That evening we enjoy a home-cooked candlelit dinner on one of the verandas. The food could not be fresher, having come from the market just that morning.

The next day brings us to Nong Khai, about 67 kilometers to the east. En route, the Mekong disappears behind towns with ramshackle wooden buildings, sprawling vegetable fields and rice paddies. Then, across the river, we see two new-looking, large hotels, the first sign of the Laotian capital, Vientiane. Once a sleepy border town, the opening of the Friendship Bridge in 1994 helped turn Nong Khai into one of the busiest commercial centers in Thailand’s northeast. Lunch awaits at riverside Daeng Namnuang, a large outdoor Vietnamese restaurant that Narisa has been coming to for years. Between rows of tables, staff bustle about balancing large trays of food. We order the popular nem nuong, a set of spring rolls, barbecued sausages, fresh green vegetables and herbs, rice vermicelli, peanuts, chili sauces, and a stack of tissue-thin rice paper in which to wrap all the different ingredients. It may not be Isan fare, but it is delicious.

We’re back at the villas by late afternoon, which Narisa says is when she often likes to kayak upstream and let the river current do the rest of the work. For us, however, she suggests something else: dinner in nearby Chiang Khan, whose main attractions are a four-kilometer esplanade along the south bank of the Mekong and a busy walking street of century-old teakwood shophouses. We arrive in time to catch the river reflecting a line of fire-colored light from a blood-orange sun, as a flock of starlings crosses a sky painted magenta, yellow, and blue. Wandering back to a funky café amid the shophouses, Christopher and I plop down in plastic chairs and order sticky rice, som tam, yam nuea yang (spicy grilled beef salad), grilled fish, and a couple of tall bottles of Beer Lao. Pointing the way at Phunacome

The next morning, just as the sun is rising, we finally go kayaking. There’s a nice chill to the air and the water appears calm and glassy. Still, small whirlpools and some swift undercurrents make navigating trickier than it looks, and paddling around a grass-tufted island I manage to steer us into a submerged rock. We back-paddle and stop in the middle of the river, letting the kayak drift in the wakening light.

Amid the slow rhythms of rural Isan, there are also unexpectedly clamorous moments. On our last night, as we finish our dinner on the veranda in the light of a full moon, we hear what sounds like a thousand firecrackers going off at once. From the other side of the villa, I can see a huge hill ablaze across the river—the result of slash-and-burn farming. The ear-splitting barrage of noise is actually bamboo exploding in the flames.

We watch the conflagration and its eerie orange glow reflected on the Mekong. It’s almost as though someone has staged a pyrotechnics show to mark the end of our visit.  Some staff join us. Above, the moon continues to climb into the starry night sky. It’s an unforgettable sight, and one that I know will remain with me long after I leave this remarkable corner of Thailand.

As none of Isan’s airports handle international flights, travelers coming from overseas will need to transit in Bangkok. Thai Airways’ regional subsidiary Thai Smile flies to the city of Khon Kaen from Suvarnabhumi Airport, while budget carriers Nok Air and Thai AirAsia  service both Khon Kaen and Loei from Don Mueang.

This article originally appeared in the August/September 2017 print issue of DestinAsian magazine (“The Secret Soul of Isan”). 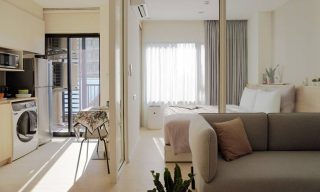 Food and beverage delivery services are also provided by the hotel, for guests who choose to stay in...