Tasmania’s riverside capital has shed some of its dowdy image in recent years, and while it may not have the swagger or accessibility of Australia’s larger cities, that’s all part of its appeal.

Having grown up in Victoria (the Canadian city, not the Australian state), I suppose I have an affinity for places of a similar stamp: smallish, temperate harbor cities founded by doughty British colonists in the 19th century. So when some old friends of mine moved their family down to Tasmania last year, I finally had an excuse to visit Hobart, the island’s compact riverside capital, which promised a comforting sense of the familiar cast in an antipodean mold.

But first, I had to get there. Alone among Australian states, there are no international flights in or out of Tasmania, unless you count a regular service to Antarctica; you can only fly in via Brisbane, Melbourne, or (in my case) Sydney. And my friends, Dean and Mary, had not settled in Hobart, but rather in a village outside Launceston, some 200 kilometers to the north. Not that I’m complaining: they have a lovely country home overlooking cow pastures and a willow-lined river, and we had a lot of catching up to do.

While there, I learned of the long-standing and almost tribalistic rivalry between Launceston and Hobart. Which has the better beer? The better schools? The better Aussie-rules football club? The two have vied for the title of Tasmania’s top city since the early days of European settlement (both were founded in the first decade of the 19th century as independent colonies), which, given their small size, would come off as charmingly parochial were it not at times so bitter. Indeed, their respective mu-nicipal councils even went to the trouble of literally burying the hatchet—a pair of gold-painted axes—under a Launceston sidewalk in 1959. Apparently, that didn’t help.

Apart from joining Mary on a couple of runs into town to get groceries, I didn’t see much of Lonnie, as the locals call it. But what I did see didn’t inspire much confidence in their claim for primacy. So two days later, I said my farewells and headed down the highway through rolling if not particularly interesting countryside. There are more scenic roads to Hobart, but the Midlands Highway has the virtue of being direct—with a stop at the little village of Ross for a scallop pie, the drive took just under three hours.

Any number of alliteratively headlined travel articles will tell you how “hip” and “happening” Hobart has become, and there are certainly some urbane establishments on hand. Just don’t come expecting the sophistication of Sydney or Melbourne: Hobart, with a population of less than 300,000 people, is provincial by contrast, a big country town on the rim of the world whose age-old sobriquet, Slobart, still resonates. And that, of course, is a large part of its appeal. Though it has its share of bland office buildings, the city remains predominantly low-rise, with much of its original colonial architecture intact thanks to an economy that never gathered enough momentum for redevelopment. There’s also a refreshing lack of big-brand names and in-your-face marketing on the city’s shopping streets, where you can still find independent bookstores and local tailors and family-run jewelers. These—along with the bracingly fresh air, affable populace, and enviable setting between the Derwent River and the forested foothills of Mount Wellington—all contribute to Hobart’s special character.

“If Hobart were a car,” writes Peter Timms in Hobart, a slim biography of the city, “it would be a Toyota Prius—sensible and socially responsible. And the … choice of a Labrador as the city’s canine personification is inspired, Labradors being homely, reliable, eager to please and a bit slow to catch on. Not glamorous, admittedly, but amiable.”

Mind you, it’s also nice to stay in stylish accommodations, and Hobart’s hotel scene, obligingly, has come a long way in the last decade. The Henry Jones Art Hotel, which occupies a row of 19th-century sandstone warehouses in Sullivans Cove, is a former jam factory turned smart 56-room lodging. Another standout is the Islington in South Hobart, a converted 1847 mansion with 11 art-filled rooms. As for my digs, they were perched atop an eight-story office building on Macquarie Street, affording knockout views over St. David’s Park to Battery Point and the blue estuarine waters of the Derwent beyond. Avalon City Retreat is as unlikely a roost as it is sublime: the two-bedroom suite is a prefabricated modular penthouse designed by local architect Craig Rosevear and Sydney-born property developer Brett Torossi, who also owns a pair of modernist retreats overlooking Great Oyster Bay on the east coast. Crane-lifted onto the building’s roof last year, the glass-walled “omnipod” is decked out in gleaming Tasmanian oak floors, designer furnishings, and hand-picked decor, including a centuries-old monastery door that Torossi found in a market in Tuscany. The bedroom modules at either end are cantilevered over the edge of the building; you feel like you’re floating in the sky. And did I mention that the timber deck comes with a Huon-pine soaking tub and an illuminated lounge chair for stargazing?

Over coffee at Smolt, a buzzing restaurant in Salamanca Square that she favors for business meetings (“so much nicer than an office, no?”), Torossi told me that she moved here from Melbourne in 2004. The attraction? “I love the human scale of the city; there’s an interconnectedness that’s peculiar to this place. And the light—it’s different because we’re so far south. Twilight here is beautifully long, and the light just before dawn is gorgeous.”

She’s equally enthusiastic about the city’s prospects. “It’s building up nicely; we’re already off the scale when it comes to arts and sciences per capita. Another 10 years from now …” She left the thought hanging in the air as she took another sip of her espresso. Then she added, “But there’s still that small-town mentality. There’s no gray area here, it’s either one thing are another—you’re either pro forestry or you’re not, for instance. Full of contradictions. And an ugly history, too. But Tasmanians embrace that, it’s part of us.” 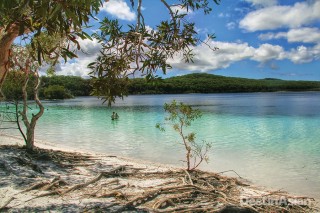 Australia’s Fraser Island is known to its traditional aboriginal owners as paradise, and it’s ea...