A redux of the storm-ravaged Paradise Beach Resort, the new incarnation occupies a rain forest–cocooned cove on the southern fringe of Long Island.

Cyclone Debbie left a path of resort destruction when it hit Queensland’s Whitsunday Islands in early 2017. This year, three of the damaged properties have reopened, none more spectacularly than Elysian Retreat. A redux of the storm-ravaged Paradise Beach Resort, the new incarnation occupies a rain forest–cocooned cove on the southern fringe of Long Island. Aside from just 10 bungalows and a communal lodge, there’s absolutely nothing else on this three-hectare slip of land. Which means, of course, that you’ll have the verdant jungle—and the Coral Sea that surrounds it—almost entirely to yourself. Guest quarters offer a cozy union of style and sustainability: everything operates on solar power; floors and furniture are fashioned from recycled hardwoods; and hammocks on private patios are positioned for optimum sea views. At the lodge, a free-form pool is filled with stress-relieving magnesium water, while a breezy restaurant captures the essence of tropical Queensland through dishes favoring sustainably caught seafood and vegetables grown in the kitchen garden. Arrival is via helicopter from nearby Hamilton Island; when your feet hit the sand, the hardest decision you’ll have to make is whether to explore the Great Barrier Reef in a glass-bottomed kayak, or grab a snorkel and dive right in.
—61-1800/765-687; elysianretreat.com.au; doubles from US$745 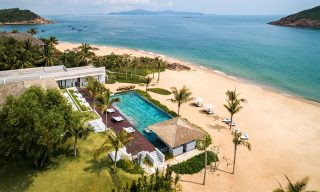