Bangkok’s most storied hotel has completed a US$18 million restoration of its two oldest wings, just in time for its 140th anniversary celebrations. Here’s a first look.

Among the extensive collection of framed memorabilia hanging in the revamped Authors’ Wing at the Mandarin Oriental in Bangkok is a letter from onetime guest Graham Greene. It reads, in part, “I have very happy memories from [my stay] nearly thirty years ago. Yes, very happy, even though it was impossible to sit outside in the evening because of the mosquitos and ‘room with bath’ meant a barrel on the balcony and a bucket to pour water over oneself.”

There’s no date on the letter, so you’re left guessing as to when that stay took place. Sometime in the early 1950s is a safe bet—Greene was living in Vietnam as a war correspondent then. Regardless, it was a long time ago, back when Bangkok’s riverside grande dame was perhaps not quite so grand as it is today.

Would Greene, I wonder, even recognize the place now? The Authors’ Wing in which he bathed alfresco is still there—founded in 1876, it’s the original Oriental Hotel—but the configuration and amenities have changed radically over the intervening decades. The two-story building’s courtyard garden was glassed over in the 1970s and refashioned as the Authors’ Lounge, known ever since for its white wicker furniture and afternoon tea service. Its 40 original guest rooms had earlier been consolidated into four suites; today, there’s just one, the Grand Royal Suite, a vast six-bedroom abode that occupies the entire upper floor. As for the adjacent Garden and River wings, they opened in 1958 and 1976 respectively—complete, of course, with en-suite bathrooms.

Greene wasn’t the only famous writer to patronize the hotel over the years. Other visiting literati included Joseph Conrad, Somerset Maugham, Noël Coward, and James Michener, each of whom had, until recently, a suite named after them in the Authors’ Wing. Those rooms no longer exist; the new 600-square-meter Grand Royal Suite, unveiled in February, has swallowed them up, becoming in the process one of the grandest accommodations in the city, with neck-craningly high ceilings, ornate plasterwork, a 12-seat dining room, and a Victorian-inspired glass conservatory. But Maugham et al. haven’t been evicted entirely—their names now grace four newly created salons off the Authors’ Lounge. This has been gently rejuvenated too, with several details—like the now bare-wood banister of its grand staircase—hearkening back to an earlier time, just like the images from the hotel’s prodigious photo archive that adorn the walls.

While the stratospherically priced Grand Royal Suite is out of reach for most of us, the 12 new suites in the Garden Wing are swoon-worthy in their own right. Occupying 80 square meters, some with a split-level layout, they have been done up by Thai design firm P49 Deesign (also responsible for the renovation of the Authors’ Wing) in a handsome contemporary-colonial style that features pearly-gray leather headboards, teakwood floors, botanical prints and artfully placed celadon ceramics, silver-leaf cabinets, and marbled bathrooms with hand-carved double vanities. Crowning the same building is Le Normandie, the Mandarin Oriental’s formal French dining room. Having been around for decades, it’s something of a classic itself, but one that has been overdue a facelift. Et voilà—P49 Deesign has jettisoned the yellow silk-lined walls and gold-rimmed vases in favor of a more of-the-moment elegance, setting a fine backdrop to chef Arnaud Dunand Sauthier’s ever-spectacular cooking. (His current eight-course menu includes such delights as Provençal asparagus with osetra caviar and sea-urchin sabayon, poached Brittany lobster, and Bresse pigeon with artichoke and black truffle. The service lasts almost three hours.)

At least two things haven’t changed at the Mandarin Oriental, though: its prime location on the Chao Phraya River and the highly personalized service that the hotel is rightly proud of. When I checked in, I was greeted with a warm “Welcome back”—this despite the fact that it had been a decade since I last stayed there. When the housekeeper noticed that the lace on one of my shoes had frayed, she alerted the butler, who immediately replaced it—with his own shoelace. And when I asked the dapper concierge where I could buy a pair of cufflinks to replace the ones I had forgotten to pack, he invited me to borrow a set from the hotel.  “Really?” I said. “Of course, sir,” he replied smoothly. “This is the Mandarin Oriental, after all.” 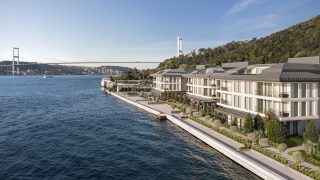